All I can say is that it is a good thing NASA does not hire FRB economists to do their math for them. Let's hope and pray this group at NASA is the only government group we can count on to do reliable math. Once decimal off on this one and it would be catastrophic. Look up in the sky. It is a bird, no it's plane, no it's Bernanke, no it is a really big rock on a near collision course with earth. I have to ask the question - What if they are lying about this as well?

"Fortunately for us, NASA predicts the murderous cosmic body will miss our planet by about 202,000 miles, passing around 6:28 p.m. on Tuesday. That's about 0.85 times the distance to the moon, NASA says. The last time an asteroid this size came this close to Earth was in 1976, and it shouldn't happen again until 2028 -- provided we're still here." Massive, unstoppable rock hurtles toward Earth - WTOP.com.

Greece, all is well, no worries here either - "With every additional deposit outflow, expect ever more money to be needed to keep the Greek sham of a banking system afloat" Greek Bank Deposits Plunge By €5.5 Billion In September: Biggest Monthly Drop Ever | ZeroHedge

Show me the money! This is a great view of the bailout process FOR EVERYONE BUT GREECE! You see, just like with AIG (remember that one?) the money FLOWS THRU to other places reducing Greece to a lifeless financial conduit to stealthily keep other institutions functioning. Where Does The Greek Bailout Money Go? | ZeroHedge. "So at least 58 cents of every bailout Euro is going outside of Greece, and depending on how you treat the repo agreements, that number could easily be 70 cents."  I also like this from the post, "We also haven't figured out about the 90 billion of derivative exposures Greece has and whether any bailout money is being used to pay on those." $90 billion!

I've been telling you for months that Germany was the wrench in the bailout engine (and for the best of reasons). They are the only ones with any sense (and money) over there. They are not going all Wiemar again (translated - no printing). ECB's Weidmann Spoils The Party: Says Leveraging EFSF Violation Of EU Treaty, Warns Of Hyperinflation | ZeroHedge. "Pohibition of monetary financing in the euro area “is one of the most important achievements in central banking” and "specifically for Germany, it is also a key lesson from the experience of hyperinflation after World War I"".

Must watch! Watch the battle of good versus evil. David Faber proves he's the biggest cheerleader for the cronies. "Sean Egan, of Egan Jones, appeared on CNBC's Squawk Box this morning to pay penance for his truthiness and daring to open investor's eyes to the reality we are facing." Egan Jones On Europe's EUR2.5 Trillion Hole | ZeroHedge

This is an absolute MUST READ! I knew it would not be long till this lovely subject reared its ugly head. STB has been telling you for YEARS that the markets levitation act is all about the illusion that all is well and to keep the massively underfunded pension system afloat (throw in the unfunded social security trust that has been stuffed with IOU's and you see we have NO retirement funds left in the nation!). Guest Post: Next In Line For Implosion: Pension Plans | ZeroHedge

To all of you On-Star and GPS owners (not to mention smart phones) - "The U.S. Supreme Court is considering whether police use of GPS devices to track criminal suspects requires a judge's advance approval." New privacy fears as police could track your GPS without a warrant | Mail Online. I'm not sure what happened to Constitutional rights, but they apparently do not matter anymore.

"You’re probably use to seeing TSA’s signature blue uniforms at the airport, but now agents are hitting the interstates to fight terrorism with Visible Intermodal Prevention and Response (VIPR)." TSA begins VIPR highway inspections in Tennessee Alex Jones' Infowars. And some wonder why I warn about this stuff. They will literally be in your home before you know it.

Cover up? You betcha! Holder: 'Fast and Furious' tactics will not be tolerated - CNN.com

We all knew (or should have known) within days after the OBL raid something was not right. I knew the minute Obummer opened his mouth it was a lie. Here is SEAL's Account | Osama Bin Laden Death | Fairy Tale | The Daily Caller

You gotta read this one - It seems that governments these days are only experts at making bad problems worse. Tokyo Starts Burning Radioactive Waste from Other Areas ... Tokyo Governor Tells Residents to "Shut Up" and Stop Complaining About It.

To those of you that don't get SEC or southern football, I am suggesting The Rivalry Between Alabama and Auburn: Roll Tide War Eagle from ESPN Films tonight at 8:00. If you have never watched any of the ESPN films programs they are usually very very well produced. Of course the Penn State issues sadly leave a massive cloud over CFB and all of sports right now.

At this time (with only limited evidence/news out) my initial read is that not only PSU should be punished, but Joe Pa should have at a minimum this years victories expunged which would place Eddie Robinson back on top of all time victories. That would be a sentence the university and he would feel the most pain from. They don't care about anything but football and records. Hit 'em where it hurts. Not to mention, all I will ever think about when I hear of the coach with the most wins of all time is this incident. That can't be.

SPX Daily - My call from the last top is playing out very nicely. Drop, pop and let the dailys set a telling divergence - see dashed red lines on the indicators. This run is weak. Also the weekly RSI 5 is diverging. 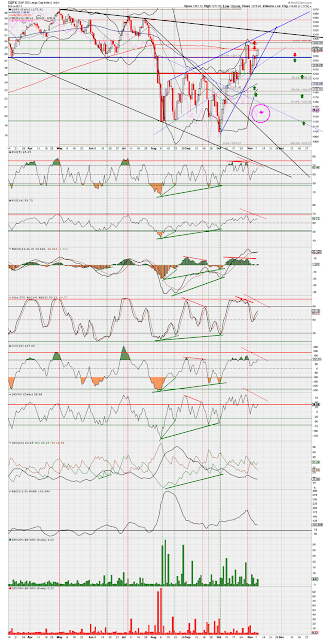