I should just stop the post right here with this one -

JPMorgan To Issue CMBS Backed By... Defaulted Loans | ZeroHedge. So, how do you tell when your Ponzi/ripoff/corrupt/fraudulent/rigged system is scraping the bottom of the barrel? Well, bundling and selling defaulted loans would be a good place to start. Do you think they will do a better job than Citi and others in disclosing this "crap" to investors? Sadly, there will be a buyer (gun to head), and that buyer will lose their shirt, but the banks will make billions in fees. All is well in the land of unicorns and lollipops.

ECB Member Tells The Truth: Debt Monetization Is The Beginning Of The End | ZeroHedge. We've discussed this to the point of no return at STB for months if not years. Nice to hear someone with some sort of street cred coming out and actually admitting it.

"We all know some 3 trillion euros of debt in Europe is uncollectible. So why isn't anyone talking about the one and only solution, which is writing off all that debt?" Guest Post: Why Isn't Anyone Talking About Writing Off 3 Trillion Euros of Bad Debt? | ZeroHedge. I think Greece was supposed to be fixed back on 10/23, but they aren't yet. Italy? Well the both appointed ex-GS people to top spots, so that's good for something right? All the hoopla about euro printing (about the only salvageable rumor/solution they have left), china, haircuts and such all went poof (but the markets did not).

Here is one that will blow your mind -

Of course there aren't any corrupt, crony, insider, backslapping (or something other from the backside) dealings going on between DC and Wall St. Read this very slowly and carefully - "You should note that so far governmental strategy has been to try and let this one quietly die. No doubt that’s because MF Global’s former CEO Jon Corzine was often mentioned just three months ago as President Barack Obama's replacement as Secretary of the Treasury for Timothy Geithner. The “regulator” at CFTC is Gary Gensler, a Goldman Sachs (GS) crony and associate of Jon Corzine." MF Global Scandal: Is CME's Financial Guarantee Of Millions Just A PR Gimmick? | Business News | Minyanville.com (h/t Soup) (emphasis mine)

"Exclusive - U.S. regulators are considering easing a proposed rule so that fewer hedge fund advisers would have to hand over troves of confidential data to the government, according to people familiar with the deliberations." SEC May Ease Hedge Fund Data Rule - Advanced Trading

Of course regulation is so rampant (/sarc) that SEC Chief Says Firing Incompetent Employees 'Would Harm The Agency’s Work,’ SEC Chief Says | CNSnews.com. What? Run that by me one more time?

I'm sure this one will gp over well in DC - New Documentary Says Gulf Oil Spill Crisis Isn't Over - Forbes (h/t Lady Raven) STB has harped on the corexit soaked sands of the GOM and the devastation there since the spill. Nothing will ever get done as long as BP, Transocean and others keep the pockets of DC well 'oiled'.

On the Iran war Watch - "According to the briefing given to a closed meeting of Jewish leaders in New York Sunday, Nov. 13, the window of opportunity for stopping Iran attaining a nuclear weapon is closing fast, DEBKAfile's sources report. It will shut down altogether after late March 2012."

Still the best and simplest chart I got, so get used to it till it breaks - So simple a caveman can do it. 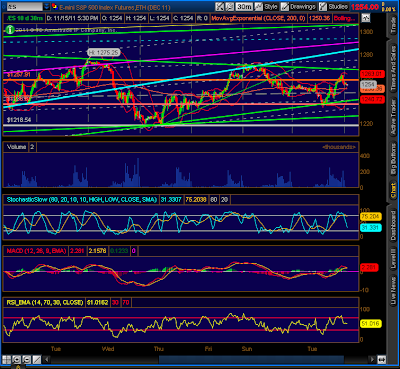