STB has been hitting hard on the Iran issues in the AD for weeks now. It appears some tensions have boiled over and now we have actual conflict. Iran Update: Six (Or Eight) UK Embassy Staff Taken Hostage: Iran Contra Redux? | ZeroHedge. I was not long ago STB was discussing Iran and wars and market crashes.

Print or die or die printing, that is the dilemma facing the EU right now. "The amount tops the 247 billion that 178 banks took last week and is the second week running that demand hit a new two-year high. In other words, despite demanding the most amount of money in 2 years, the banks were unable to flip all that cash and "sterilize" monetized paper." ECB Fails To Sterilize Bond Purchases, €9 Billion Shortfall Confirms Euro Bank Liquidity Freeze | ZeroHedge. Just follow the liquidity train.

Thinking about this earlier, what is the new reality with Italy? We used to fawn over rates sub 6% and fear above 7%. Then 7% became reality and now are we to rejoice rates sub 8% and greet them like all is well? "Confirming just how much the market has lost it, at just after 5 am Eastern when the news of today's Italian auction as announced, the EURUSD soared by almost 100 pips on news that the auction had not failed." Italy Prices €7.5 Billion In New Bonds At Unsustainable Yields, Market Rejoices If Only For A Few Minutes | ZeroHedge

My November swoon call worked fairly well garnering the worst Thanksgiving week in history. Only thanks to the recent rumor du jour was it halted. The call still stands and is reminiscent of my July crash call that worked so so in July and hit hard in August. 5 Fed member speak today which will make for a hectic day. There is also an FOMC meeting next week. I did expect more from this fall, but I'll take a 10% market move and live with it for now.

Please do not get caught up in some of the bullish sentiment on the board. There should be one last pop from the final QE3 announcement, but it will only be a pop.   Doom is coming and you need to be prepared. Remember, buy low and sell high. I do not recommend trading these rumor driven ramps. I will be sidelined (unless something extra normal happens to the upside that compels me to come in for a scalp) waiting with powder dry for the next move south.

Minis 30m - Price channeling in what may be starting a B down of an ABC corrective. Price is stalling here at the 1200 round level just under gap resistance at the 30% retrace of the fall off 1273. Price has moved back into the channel off the August lows (heavy yellow line) but is still in a resistance area. 4hr minis are now overbought. 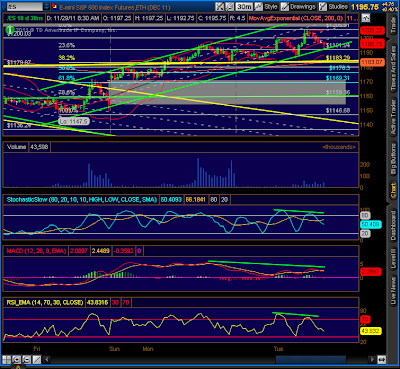 SPX Daily - I remain VERY bearish with the only risk to my call some sort of rumor that all is well (which should happen often). 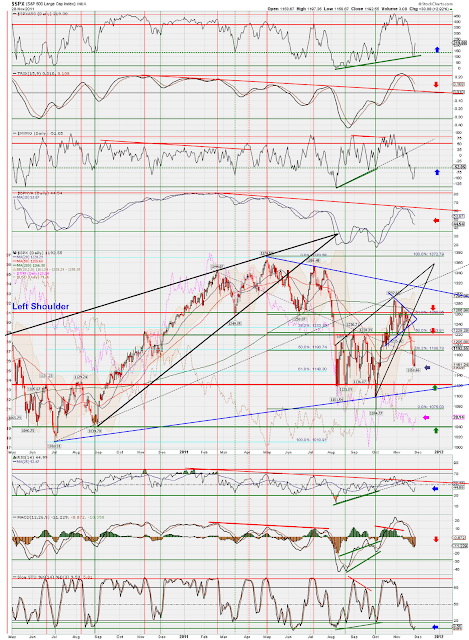