You know the drill, share the love and the knowledge.

Not sure if we should have another Shanky Summit Sunday night, but I will be here watching the futures just in case something is of interest. Nothing like them slipping in some strange market action during a holiday week. They need to quell the fear, but that appears to be impossible at this time as even the dumbest of the sheeple are now seeing thru the smokescreen. To those thinking about bank holiday next weekend (for the third year in a row), the thoughts are worth considering. Super committee this week. I think they punt and defer to the automatic cut features as they are incapable of cutting anything and this would be a great out where the blame is on the law and not the politicians. Things are really bad out there now. there is no denying it. Very, very scary.

Go figure - US Deficit-Cutting Talks Appear to Be Near Collapse


Daily SPX - That 1220 support level that has been trying to crack for two days is all she's got left. I lowered the black wedge support diagonal once already. There is an outside chance this is a D touch resetting the lower wedge support (as it has done in the past) which would require lowering that wedge support one last time. I don't see it though. If it does, it will set up the greatest sell of all time.

They will really have to come up with some sort of major news to deflect this slide (which will only delay the inevitable). The "hope" rally is fading for a darn good reason, rallies based on rumor and hopium are just that. The October ramp was a larger version of the moves in June and July that were taken back just as quickly as they came. I'm about as scared right now as I have been at anytime, and you should be as well. 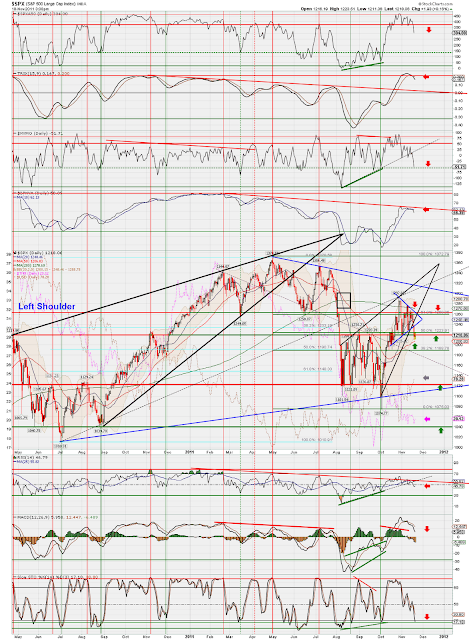