It is asteroid day! Huge asteroid headed for close encounter with Earth, "It is the first time since 1976 that an object of this size has passed this closely to the Earth." Want to see a picture of the large rock? NASA Captures New Images of Large Asteroid Passing Earth.

Speaking of close encounters, the White House says no evidence of aliens, but leaves the door open with, "noting that many scientists and mathematicians believe that, statistically speaking, odds are high that there is life somewhere among the "trillions and trillions of stars in the universe"".

I 100% agree with that statement and apparently NASA does as well. For some reason they like to take a lot of pictures of space dust doing miraculous things (seems like a good use of their time and taxpayer funds to me). See here and also Shanky's favorite UFO video of all time here (once again they have a great interest in capturing images of space dust moving in ways dust does not here on earth).

Nuff of the space stuff, although the correlation of strange events and close encounters does parallel well to the markets. Like the 20 point ramp this morning, one could correlate the mysterious moves in the futures to those made by some of the "particles" you where shown in the videos above. You can compare the lies from NASA about the existence of UFO's and the ones from the Fed saying we left the recession in 2009. There are so many places I could go with all this, but let's get back on track.

Things are bad in the EU. You know, when you have a high percentage of forced turnover of national leaders it is normally not a good thing. "Mr Berlusconi is hanging on as the last surviving prime minister on the crisis-stricken periphery of the eurozone, following changes of governments in Ireland and Portugal, the decision by Spain’s José Luis Rodríguez Zapatero not to seek re-election this month and the latest declaration by George Papandreou that he would not lead a new coalition government in Greece." Italy’s bonds dragged into danger zone - FT.com

It appears a huge amount of the funds in Europe are now with the ECB. Why not just keep the money in a bank where it would be just as safe? (/sarc) "And while we know that facts don't matter, here is the main chart we could find to start the day, which summarizes why things in Europe are unlikely to get better any time soon: the amount of cash parked by European banks with the ECB just hit €299 billion, the highest since May 2010." ECB Deposit Facility Hits €299 Billlion, And Other Key Overnight Session Updates | ZeroHedge

So where is your money? After the O-MFG event where investors lost hundreds of millions in cash, have you taken actions similar to the institutions (even banks) and moved you money to a place you know it can't go POOF? Is there such a place other than a safe in your home or gold?

Speaking of sovereign exposure, MF Global and Jefferies aside, it really is no big deal. (CNBS beating down Sean Egan again for his outrageous ratings defending the system over the investor as usual) Maybe you should be aware of the broker dealers latest trick to "protect" them and your funds from "exposure". "As for Morgan Stanley, please keep coming up with more and creative ways to mask the fact that your publicly disclosed net exposure to Europe is totally fabricated and meaningless." Presenting The Latest Eurodebt Exposure Masking Scam Courtesy Of Morgan Stanley: Level 1 To Level 2 Transfers | ZeroHedge

The US debt ceiling vote is coming. I have no clue how they have kept this so quiet. I think there will be a massive surprise come out of this meeting. I need to do a separate post on that summarizing my thoughts and big picture call.

SPX Daily - Since the turn at 1290 I called for a drop and pop to set divergences on the daily indicators (shown as potential moves with red dashed lines below) before a major move south. So far so good.

All of this manufactured move started with the hope that the EU crisis would have a solution waaaaay back on 10/23. Where are we now? I had anticipated it would be a sell the news event, and as of yet we have not had any news to sell nor any market correction to note the non event. What is so funny is that the solutions they will enact - they can't be afforded by the sovereigns - Kicking the can yet again making the end game that much worse.

Watch for the wedge to play out. I do not think price makes the upper black resistance diagonal. 1292 resistance, upper BB (1286) and the 200dma (1273) are three barriers already overbought conditions will have to battle with (not to mention the horrific environment).

Another thing that needs to be noted is the position of the TNX (pink). SPX is separating from the bond market again and we all know which of the two markets is always right. 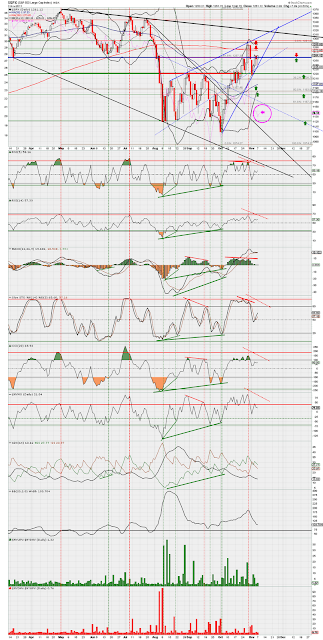 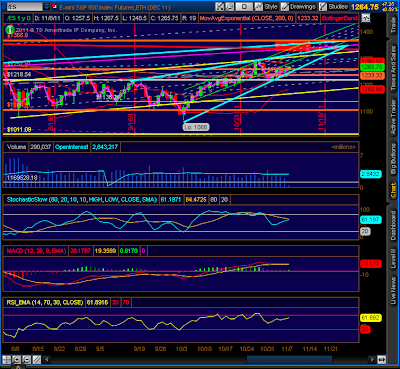 Minis 1m - Once again a miraculous overnight stick save. One day you are gonna wake up and they will not have saved it. As mentioned above a 20 point slap shot on the news that .... wait ... what news? 1257 is support with the VWAP sitting at 1260. VWAP above support is bullish. 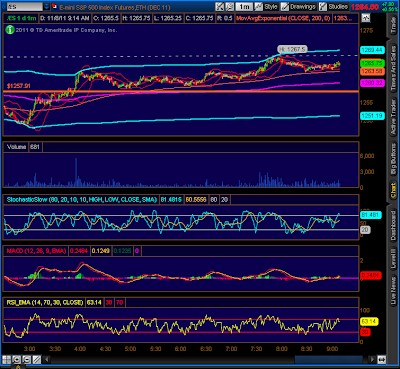