I try very hard every day to paint the picture for you. If you don't get that a total financial collapse is coming at this point I don't know what to tell you to do. It is a psychological leap that must be made from comfort and safety to the unknown and dark and scary. All I can ask is that you at least prepare for the worst. If it does not happen, then at least you will have had the peace of mind knowing you and your family would have been provided for.

This is not a joke - it is real - Double Your Money In 6 Months: 1 Year Greek Yields Pass 200% For First Time Ever | ZeroHedge.

"George Papandreou's socialist government was on the brink of collapse after his referendum plan sparked a furious reaction within his own party and plunged Europe back into turmoil, only days after a complex rescue deal had been agreed – requiring Greece to embark on tough new cost-cutting measures." Greek government teeters on brink of collapse in wake of referendum plan | Business | The Guardian

The Wall Street fraud and corruption train continues. The O-MFG event yesterday may lead to hundreds of millions of client funds being lost because they were inappropriately used stolen. "MF Global Admits Using Client Money, AP Says" Jon Corzine - Meet Bubba | ZeroHedge. And also see Someone Is Going To Jail For This: MF Global Caught Stealing Hundreds Of Millions From Customers? | ZeroHedge

"because if Italy falls, Europe falls, and with it fall not only all the largely undercapitalized French banks (all of them), but the US banks that have not tens, but hundreds of billions of gross CDS exposure facing them, which at that point will be perfectly unhedged as all their transatlantic counterparties will be in the same boat as MF Global." How US Banks Are Lying About Their European Exposure; Or How Bilateral Netting Ends With A Bang, Not A Whimper | ZeroHedge

And since the recession ended two years ago, the recovery has baan so spectacular that - US Food Stamp Usage Hits New Record | ZeroHedge

This is my kind of Sherrif - "Sheriff Chuck Wright opened his news conference by saying, "Our form of justice is not making it." ...He said, "Carry a concealed weapon. That'll fix it."" Sheriff: Time For Citizens To Arm Themselves - WYFF Greenville

This is really fucked up - "The black flag of Al Qaeda was hoisted in Libya yesterday as Nato formally ended its military campaign." Flying proudly over the birthplace of Libya's revolution, the flag of Al Qaeda | Mail Online

From the total bullshit file - You know when you go thru those scanners at the airpot, you know the ones supposed to give you a warm and fuzzy feeling because they are keeping you safe as we all travel thru the country? Well .... it turns out that the warm and fuzzy feeling is from all the radiation you are absorbing. U.S. Government Glossed Over Cancer Concerns As It Rolled Out Airport X-Ray Scanners - ProPublica

Wasn't he supposed to be the most transparent president in history? I mean that is what he promised in his campaign, right? This is simply outlandish and over the top.

"Under the new rules, the government could falsely respond to those who file FOIA requests that a document does not exist if it pertains to an ongoing criminal investigation, concerns a terrorist organization, or a counterintelligence operation involving a foreign nation." On FOIA, Obama wants a license to lie | Examiner Editorial | Editorials | Washington Examiner


I'll give you one shot at answering this question - Who is this new act designed to protect? If you answered Wall Street you got it right.

Charts of the Day -

Minis 1m - This is what happens on a rumor filled day of on/off Greek referendum   vote. What you see is a series of almost six 20 point swings in the S&P 500 futures IN ONE DAY! That would normally define a extremely wide range during a volatile market top or bottom over a week or two. This is one day. Absolutely amazing market action that is beyond normal. 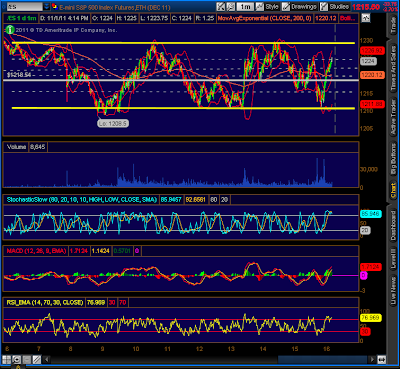 Minis 4hr - This is what it looks like when resistance becomes support. The white line at 1218 in the chart above is long term support/resistance going back to April of 2010 and beyond. Here you see it as resistance from August thru late October. Now you know why they are fighting to save this support level. If it cracks the markets fall to the lower end of the last range, 1110 support. First target is near 1161 which is yellow channel support and the lower daily BB. 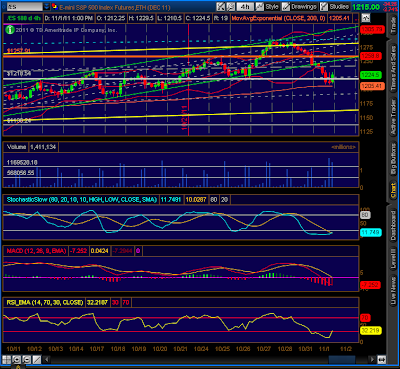 What happened to your favorite leveraged short ETF today? That is one wild ride. Take a look at the percentage changes on the right.

Where does the SPX price belong? Looks like SPX:USB is getting a head start. And yet that is another comparable move to the top in 2007 if not worse.