All I can do is laugh at this point. Seriously, there is no solution to the euro zone debt crisis. This was supposed to be resolved 10 days ago on 10/23. They sure make you think they can pull that last rabbit out of the magical hat.

How can they fix it? Well about the only refuge left is to turn on the presses and start printing euros. How will that go over? Well, other than being illegal, an already struggling populace would then be subjected to massive inflation. I guess you gotta do what you gotta do. This should be the next step. I'm sure the markets will just love that and celebrate another year or less on the debt tit before turning to dust.

Most importantly let's cover the O-MFG (MF Global) event and the $600+ million stolen from investors. Here is the deal, "they" just sacrificed one of their own. This is called financial cannibalism. Either a bank or a sovereign saw an opportunity to snatch a quick gain (no matter who's expense) and took it. I suspect that there are plenty of "opportunities" for this to happen out there and that using client funds was a common practice. I suspect there is a gentleman's agreement not to infringe on other broker dealers in this situation - someone crossed the line.

This is the third time I have posted this - READ IT - "The absolute craziest outcome would be that we learn that it was Goldman who closed the books and seized the cash last Friday (someone did). It would be even crazier if this leads to a problem that gets out of hand. There’s a decent chance that it plays out along these lines." On MF | ZeroHedge. Are you in cash at your broker dealer? As I mentioned this morning maybe the best place to be is in an immunized portfolio of half SPY half SH. I have no idea what is safe anymore other than physical gold or silver in your safe at your house that you paid cash for.

Last night the markets were rocked (you could never tell) by another broker dealer downgrade. "Because like with insolvent sovereigns and the law of communicating vessels, there rarely is just one cockroach. Egan Jones Downgrades Jefferies On Concerns About Sovereign Exposure Amounting To 77% Of Equity" | ZeroHedge

Of course Jefferies' first statement looked like this, and then there was "Jefferies, which two days ago denied, denied, denied, has been forced to release another statement, 48 short hours later. As usual, the excuse used is the "Net exposure" is just $38 million compared to gross of $2.7 billion, a generic claim which was summarily debunked in our previous post." Jefferies Re-Releases Statement | ZeroHedge That gives you a warm and fuzzy feeling of course.

You need to watch this interview with Shawn Eegen. CNBC rakes him and his companies downgrade over the hot coals. Jefferies Downgraded on Europe Exposure. this does a nice job of explaining the risk they see in the system (which CNBS thinks is an outrage and dangerous to investors).


Where are we as a nation? 15 Trillion Dollars In Debt, 45 Million Americans On Food Stamps And Zero Solutions On The Horizon  "For example, if a mother and a father gave their teenage kids a bunch of credit cards and told them to go out and buy whatever they wanted, that would create a lot of "economic activity", but it would also send that family to the poorhouse really quickly. .... Well, we have basically done the same thing as a nation.  We are drowning in debt, and all of this debt is going to destroy us financially."

Don't forget the debt ceiling vote is coming November 23rd. The super congress is sequestered right now and flying in the EU smoke screen. This will be a massive blow up, worse than the July fiasco. What is the worst part of this deal - we've already spent half of the money that is to be allocated from the vote. In case you need to read the above post again, do it.

How bout this oldie but goodie - Muni Bonds- one of STB's favorite subjects that we don't visit often enough. "Moody's noting that in Q3, Muni downgrades outweighed upgrades by the most since the financial crisis began. At 5.3 to 1, the third quarter of 2011 had the highest downgrade-to-upgrade ratio of any quarter for the U.S. public finance sector since the onset of the financial crisis in 2008. "A rapid deterioration in credit metrics led to a higher-than-average 14 multi-notch downgrades." Will Meredith Whitney Be Proven Right In The End? | ZeroHedge

My head is spinning, that is enough for today, let's not visit the G20, Greece PM step down, Greece referendum, Italy, Syria, Iran war or any of the other news this evening. Frankly, I'm tired and a bit frustrated.

We'll still find time to pick on Obummer - "Isn't this whole scene pretty standard for President Obama? The Europeans get a handshake and the Islamist Turkish prime minister Recep Tayyip Erdogan gets a hug. And all the president seems to have in mind is campaign politics and his reelection effort." Obama Gives Erdogan the 'Hug Treatment' | The Weekly Standard


Charts of the Day (for what they are worth) -

Minis 30m - possible Head and Shoulders I have been showing for a few days now. STB made a really nice "pot shot" call Wednesday that price would hit 1257 at 2:00 today - I missed it by 0.25 point and 7 minutes. 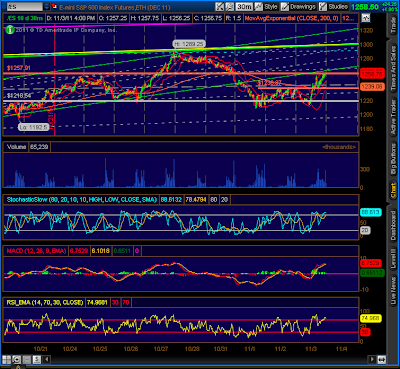 Minis Daily - The red target area near 1330 I have been showing for a couple of weeks now. I just added the potential blue wedge. 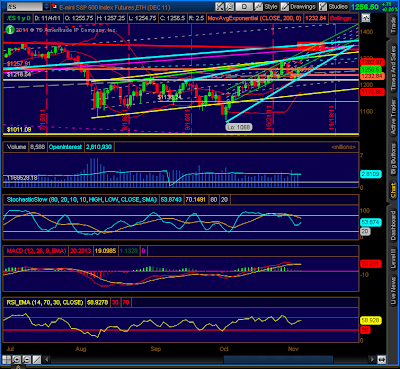