Another scary day as the failure of the super committee to even make an effort to resolve this nations spending problem defines the day. Politicians suck. As documented here and in many other places on the web, our representatives are there to serve themselves via insider trading, receiving funds and favors from special interest groups, and to set up their lucrative post rep years. If you think these people give a shit about America you need to think twice. Maybe some do (Ron and Rand), but the rest are a sham.

I've got news for everyone, the days of this country just floating along without any representation in DC are over. The time has come to have to pay the piper for all of the great music over the past 20 years. Guess what? Someone will now have to put on their big boy pants and step up to make some real meaningful decisions. Sadly, these people have proven themselves not capable of that. You see at this point anything they do will cause them to lose their lucrative job, so they do nothing. At this point they all will most likely be voted out, so they do nothing.

And you wonder why the super committee did nothing. This is an election year. How messed up is this country? Lets just start and end with the fact that Obummer is even being considered for reelection. The fact he has a poll rating is amazing to me. The "most powerful man on earth" has not done jack shit except lie, promote his special interests (think Solyndra) and spend more money forcing this nation further in debt than any before him. If this SOB had done half of what he promised in his BS campaign we'd be recovering now and not worse than when he started. Get this worthless hunk of Nobel junk out of office and get the only candidate that we can trust in there, Ron Paul!

In the big news this morning (still waiting on the SC), Revised Q3 GDP Drops By 20% To 2.0%, Misses Expectations Of 2.5% By 2 Standard Deviations | ZeroHedge. If you believe that GDP number is positive then Santa will be right over with all your free gifts (incidentally this is what the Obummer voters believe - still - they are all in the "fool me twice" crowd). This GDP number, as well as all the other economic data you get, is total horse shit.

Continuing the O- MFG event, Anger mounts as MF Global clients see $3 billion still stuck - Yahoo! News. So much for that measly $600 billion they initially said had been stolen from investors. Folks, this is real. It happened. A broker dealer went bust and all the money is now locked up or gone. How would you like it if your broker dealer did this to you? Well, this is proof that it can happen. When I say things are scary, I mean it. There literally may be no place to hide when this mess really unwinds.

Minis daily -The yellow channel from the August lows is what I am looking at as potential support here. If it works it will only be temporary, and any pop will be because another bullshit rumor and will thus be only temporary. 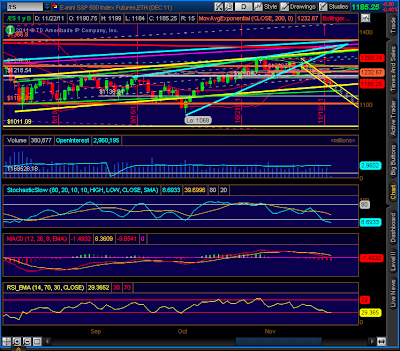 Minis 30m - Here is the last week of price action after the blue wedge was busted and backtested. You can see price is oversold with some descent divergences on this time frame coming into that potential channel support. 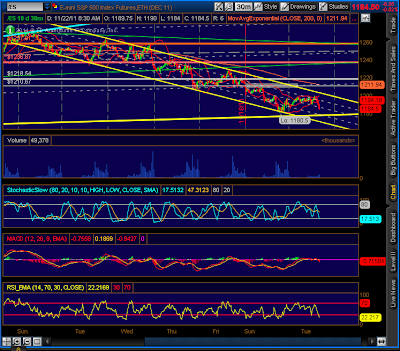 SPX Daily - 1220 support is gone obviously. Note the purple dashed diagonal off the February top and what stopped it yesterday. I suspect there is a good chance this stays in play as s/r for some time. The slope of this line is not the prettiest thing. At this time I'm still looking for a major move south (1040) and for the Fed to step in with some sort of massive rescue WMR. 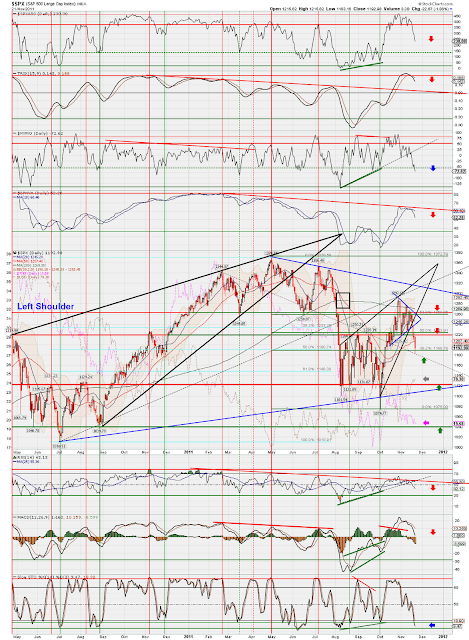