Tough day for STB with computer all bogged down and no solution in sight. Reduced to surfing and working in safe mode. This must be a good one, cause with all the previous hacks and such I have this thing as locked down as possible.

Let's jump on into the news shall we. Things are really bad, I just don't have time to elaborate on all the financial doom there is out there right now. Let me hit what I can.

Can they pay their bills? "December is the first month with very significant maturities as more than $52bn comes due, with $14.9bn next week alone." $52.5 Billion In Virtually Free US Bank Debt Due Next Month | ZeroHedge

I just told someone close to me yesterday that the insurance companies were in danger. ROFLMAO 4 to 6% returns in a non correlated risk averse asset my ass. That's funny. Scramble From European Insurers Accelerates: ASSGEN, Allianz CDS Soar | ZeroHedge

Well, I thought the market would have crashed by now and this deal would be a no tax hikes and a ton of stimulus slam dunk. Still got time for all that to occur with FOMC meeting early December, just not in my original time frame. "The co-chairs of the U.S. Congress "super committee" will announce that their panel has failed to reach a deal on at least $1.2 trillion in deficit reductions, a senior congressional aide said on Monday." It's Official (For the Nth Time): "No Deal" | ZeroHedge


"Unfortunately, the vast majority of our politicians still believe that the current financial system can be fixed and the vast majority of them still fully support the Federal Reserve. ... That is going to prove to be a gigantic mistake."  The following are 30 facts that show that the United States is heading directly for a massive financial crisis.... 1 Through 30 – The Coming U.S. Financial Crisis By The Numbers

"Russian warships have entered Syrian territorial waters in an aggressive move designed to prevent any NATO-led attack on the country under the guise of a “humanitarian intervention”." » Russian Warships Enter Syrian Waters To Prevent NATO Attack Alex Jones' Infowars: There's a war on for your mind!

I guess they needed the money? All $400k of what this fish was worth.  "However, when Rafael rolled down the dock in Provincetown there was an unexpected and unwelcome development. The authorities were waiting. Agents from the National Oceanic and Atmospheric Administration's Office of Law Enforcement informed him they were confis­cating his fish — all 881 pounds of it." New Bedford fisherman forced to give up 800-pound tuna | CapeCodOnline.com

OK, yes, this really happened. I'll lay odds this was a public school and the principal is an avid Obummer supporter. If you do not find anything wrong with this gross over reaction to normalcy, please leave the blog and never come back. "A sheriff’s deputy was dispatched last week to a Florida elementary school after a girl kissed a boy during a physical education class. ... School brass actually reported the impromptu buss as a possible sex crime, according to the Lee County Sheriff’s Office." Cops Summoned To Florida Elementary School After Girl Kisses Boy In Phys Ed Class | The Smoking Gun

This is really comforting. Antibiotic-resistant infections spread through Europe - The Independent. "The world is being driven towards the "unthinkable scenario of untreatable infections", experts are warning, because of the growth of superbugs resistant to all antibiotics and the dwindling interest in developing new drugs to combat them."

This is when you throw the remote or your hat or whatever and say, "I have heard it all now." Ranking right up there with the global warming fraud we get, "In a scarcely believable ­ruling, a panel of experts threw out a claim that regular water consumption is the best way to rehydrate the body." Express.co.uk - Home of the Daily and Sunday Express | UK News :: EU says water is not healthy

This one had my jaw on the floor when I heard it. CM speaking the truth? Talking down a president? Thrill Is Gone? Matthews Turns On Obama; ‘I Hear Stories That You Would Not Believe’ Breitbart.tv

Well, if I thought the Hildabeast was any better than any of the republicons running I would agree with this. STB still amazed that Obummer could be in the running for president. Just goes to show how much power the entitlement state has over this country. "President Obama should abandon his run for a second term and turn over the reins of the Democratic Party to Secretary of State Hillary Clinton, two one-time Democratic pollsters wrote in Monday's Wall Street Journal, which appeared online Sunday." Former Democratic Pollsters: Obama Should Abandon Run for Second Term - Michael Catalini - NationalJournal.com

SPX 60m - That dashed purple line is the parallel one to the upper wedge resistance. You copy that and place it where lower support diag begins (to like form a channel) and that becomes a wedge breakdown target line. Bam! or not at the 50% retracement? 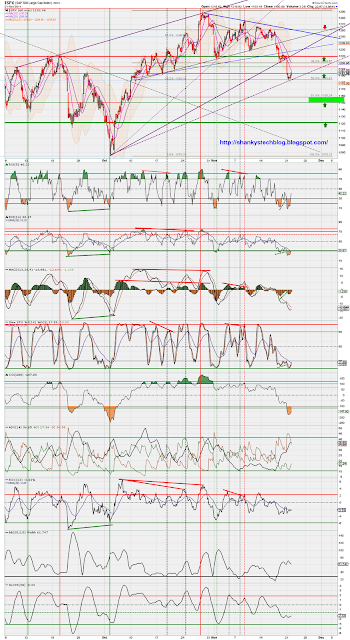 Minis 30m channel down into channel support that I was showing earlier. Both these charts show support here, the question is can that support hold? Maybe for a pop or relief rally (something to sucker the bulltards back in for a day or so before the lights get turned out). 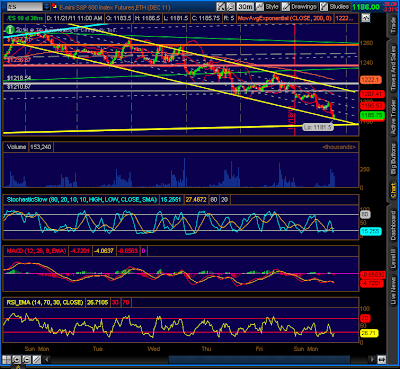