Let's start our day with this nugget - "At the close of business on Tuesday, the debt of the federal government exceeded $15 trillion for the first time--with the largest single owner of the publicly held portion of that debt being the Federal Reserve." Fed Now Largest Owner of U.S. Gov’t Debt—Surpassing China | CNSnews.com.

You need to think about that long and hard. Wrap you mind around what it says. Now, we somehow still have Obummer for a president who has increased the national debt over 41% since he took office, a corrupt congress, a Fed in total control of the economic collapse and Wall Street and the banksters raking in every penny they can of stimulus funds. Things are looking up! Or are they?


The next financial crisis will be hellish, and it’s on its way - Yahoo! News.  ""There is definitely going to be another financial crisis around the corner," says hedge fund legend Mark Mobius, "because we haven't solved any of the things that caused the previous crisis."" How's that for a qualifying opening statement from a super hedge fund manager? Again, these quotes and referencing are for the nonbelievers that think I do nothing but spew bearish BS everyday.

I feel obligated to report some good news (can't remember the last time I did this) - somebody's goin to jail and it is not an OWS protester! - First Felony Charges Brought Against Robosigners | ZeroHedge.

STB often rails on the bullshit economic numbers printed out of necessity by our government and the agencies it funds. Again, more confirmation for STB (which is happening more and more frequently). Are Aliens Buying Louis Vuitton Handbags? - World Exports $338Bn More Than It Imports | ZeroHedge.  The jobs report this morning, celebrates a 388k print like this is good news.

Remember that Obummer needs to create over 260,000 jobs per month by the end of his next term to return us to per recession levels. That is roughly a 648k flip per month. You tell me, realistically speaking - not government bullshit, how long it will take to get back to some semblance of pre recession employment? OH, remember that $15 trillion number above - we're BROKE.

As for the EU debacle - they are broker (more broke, flat busted) than we are (well by the bullshit numbers we report - add the off balance sheet FNM and FRE debt to that $15 trillion number and our debt/gdp number goes to 150% which puts us in line with the best of those troubled sovereigns in the euro zone). Watch the spreads rise. The bond market is rarely if ever wrong.

Folks we're on the verge of my November swoon and there is nothing that the central planners can do about it. Oh, about that super committee, where are they and what's going on? Awfully quiet in the basement of the capital. They have a week to get the job done. After seeing a news bit last night I came to the conclusion that the easiest way out, without any congressperson being responsible for cutting the budget, will be to do nothing and allow the auto features to kick in. This way there is no one to blame. Boy were they smart putting that feature in.

Minis daily - Just look at the indicators below. I think you are looking at a quick ride to 1100 pretty soon. The thing about ramps like October is they leave no natural support, so they get ripped back. 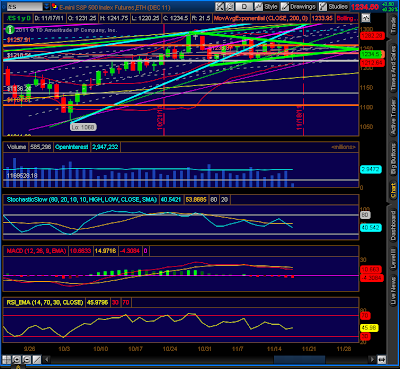 Minis 30m - all the lines that matter. Well that white support at 1218 is the only one that matters. Not sure if the max pain SPY 124 number for opex will be a factor with the fear I'm sensing. I was calling for consolidation thru Friday as the green wedge plays out. Not sure they will make it. As long as 1218 holds they have a shot. Next week - all bets are off. 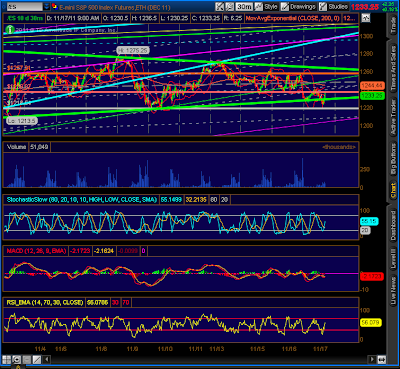 SPX Daily - Looks pretty nasty. Overbought and hanging on by a thread. She's ready to take back some ground. 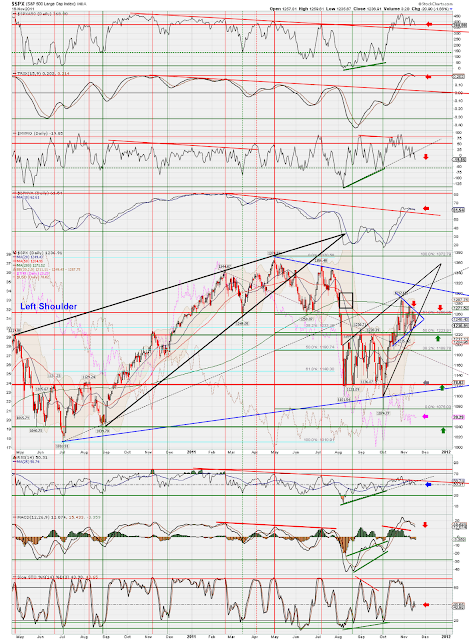 Minis 1m - Green is lower diagonal wedge/triangle support. Orange is 1236 s/r. Just above that you have the 1241/1245 resistance area. Just watch the 1218 white line. If anyone says anything about getting long - DO NOT LISTEN TO THEM. It is not worth the risk to chase one last pop or stick save. I suggest you patiently let this trade come to you and have plenty of powder dry. 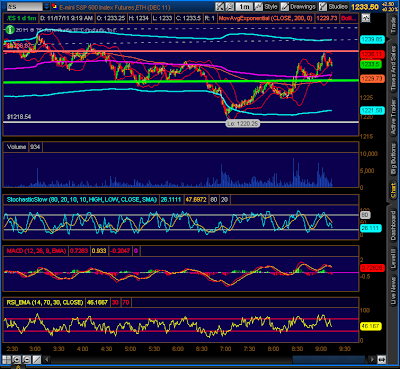