OK, we opened this morning with the news There's Your Official Warning From The Fed | ZeroHedge. Then later in the day we received Fed To Hike Current Coupon MBS Margins | ZeroHedge. As I said earlier, if the Fed is dropping into protection mode, then you should be as well. Following the Fed's moves has been the key to everything in this market for the past two years. Now is not time to change strategies.

I often speak of corruption and fraud (OK, I do it all the time), and there are some out there that just don't get it or believe me when I pen such things. As usual STB confirmation is always pleasing to hear. It is especially pleasing when it comes from the horses mouth. Please read the following two links closely.

This will give you a warm and fuzzy feeling. An Insight into Tim Geithner's Respect for Law and Constitutions from EconomicPolicyJournal.com gives you, "He said, in a somewhat irritated fashion, that "there are ways to get around these things". So much for constitutions. Then he added. "It's not rocket science [to get around these things]"." That's comforting to know.

"Leeson remarks: “The weakness is in those risk management compliance and control areas. Always has been, still is and probably always will be”." European Bank's Response To Margin Calls: Just Break The Law And Make It Up | ZeroHedge

Of course the banks are just fine and all is well (if you don't pull back the curtain to expose the little man pulling the levers). Wait, Toto, don't .... "UNICREDIT CEO, IN MEETING WITH ECB, TO ASK FOR MORE ACCESS TO  ECB FUNDING FOR ITALIAN BANKS BY WIDENING TYPE OF COLLATERAL  USED-SOURCE CLOSE TO BANK. Hmmmmm, UniCredit....where is that name familiar from. Oh wait, that's right - it was, once again, the top name on yesterday's Sigma X report of most actively traded companies by Goldman's special clients. Good to see there was no leakage here at all, none." UniCredit Failure Concerns, Spanish Bond Margin Hike Rumors Drives V-Shaped Recovery In "Risk Off" | ZeroHedge

This was a nice technical piece that summarizes the markets current position and  compares it to past events Guest Post: Attention Passengers on Global Equity Flight 2011: Assume Crash Positions | ZeroHedge. Of course most of that has been covered here. Nice to finally see someone else picking up my larger head and shoulders formation.

For those of you that think the O-MFG (MF Global) event was no big deal and do not need to have any concern for the safety of their own investment accounts - think again. This story is worth a listen. "The recent bankruptcy of financial stalwart and Wall Street casino failure MF Global in the US, has claimed a new and unlikely victim. Following the company’s glorious collapse, Trends Research founder Gerald Celente had his own six figure gold investment account completely looted by chapter 11 trustees, and he is fighting to get it back." » Gerald Celente’s gold account was emptied by MF Global Alex Jones' Infowars.

This will make you proud - You gotta see the chart in this post. Inverse to SPX performance and way overdue a massive breakout. "In such a target rich environment,. how on earth is it possible that Bank Fraud prosecutions are dropping? It is an outrage!" Bank Fraud Prosecution Continues to Drop under Obama | The Big Picture

Wait, someone is taking shots (literally) at the white house? This one (cause the handler is ever present) will go without comment Secret Service says bullet hit White House - Yahoo! News

Not sure if we can trust CNN polls (you know, if Ron Paul is winning one they pull it down and cry foul) but CNN Poll: Obama ranks low among recent incumbents – CNN Political Ticker - CNN.com Blogs. "In comparison to recent incumbents running for re-election, Obama's 46% approval ranks above only Jimmy Carter and Gerald Ford - who both lost their re-election bids - in November of the year before an election. " I'd be looking for a new war to improve hi standing with voters sooner than later.

For those wondering why oil is toying with the $100 mark - Iran will defend Syria against any possible Military Attacks.

Does this surprise you? "The head of the Transportation Security Administration has backed off a public commitment to conduct a new independent study of X-ray body scanners used at airport security lanes around the country." TSA Puts Off Safety Study of X-ray Body Scanners - ProPublica

Maybe the person shooting at the white house was pissed off about this horrific development - "Gun owners who have historically been able to use public lands for target practice would be barred from potentially millions of acres under new rules drafted by the Interior Department, the first major move by the Obama administration to impose limits on firearms." Obama Pushing Shooters Off Public Lands - Washington Whispers (usnews.com). Maybe that person above was just getting a last shot or two in on public lands?

Financials Comparison Chart - Where the major indexes corrected and reversed just above the 2010 lows, the financials did not. Where the SPX and others have run in October, the banks only managed a backtest of busted resistance. Financials (and bond markets) rarely lie. BAC closing with a 5 handle is just....so....sweet. Let's go for 4 shall we! 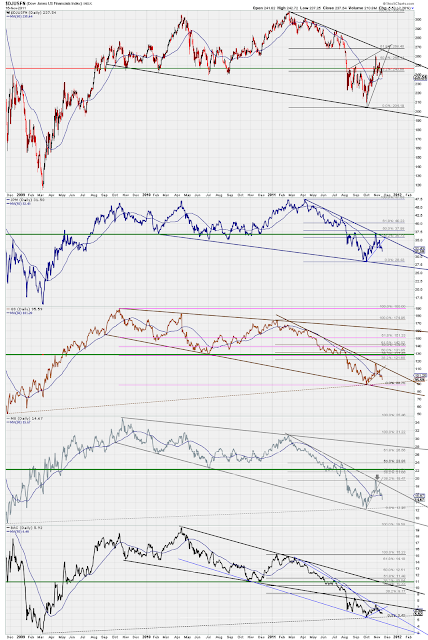 Minis 4hr - Green wedge/triangle and all the support levels. Gonna keep showing you these minis charts till you are sick of them. They are the story. 1228 is the lower diagonal (holding nicely at the time of this post). If that goes and then 1218, my November swoon call will be ripe. OPEX max SPY pain is 124.0 which should be kept in mind. 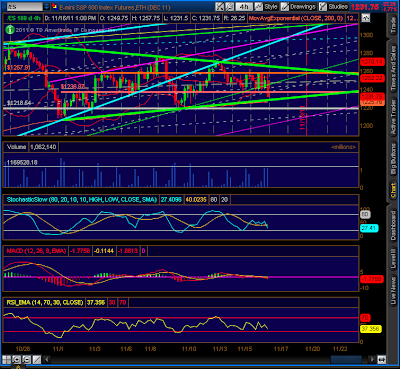