You know the drill - share the love and the knowledge and pass the punkin pie please. Enjoy this one cause next year's is gonna really suck. Be thankful now cause you're gonna be pissed later.

Not sure what I will do for Friday.  There will be a post, but it will be limited.

Sorry to bring you all this crappy news, but you must see it and feel it. No longer can we live in denial. This shit is real and it is an enormous problem. As STB pointed out many months ago - it is all about liquidity - show me the money! Sadly there isn't any to show as they burned (stole) it all.

I've been telling you literally for years the math does not work and global default is the only answer. I've been telling you to have plenty of cash at home (with many other things). So what happens when the banks all freeze up? Well, the O-MFG event has been going on for over a month now with no resolution or return of the stolen investor capital. Think about that long and hard.

Time to start considering the worst case scenarios and have a TOTAL DISASTER PLAN in place. I still think they are coming for ALL the retirement assets of the nation (401k, IRA, pensions et al) and will confiscate them and force them into treasuries as a last resort to keep things afloat. This will supplement SS and bind all the retirement plans in the nation under one government controlled distribution system where all are treated equally. That will suck won't it. Think about the market devastation when that happens? Hey, we all either keep eating or we keep the market, you decide.

"So if you want to stabilize that $30 trillion and in my view it's not that you want to, it's that you have to, you do not have a choice, you're going to have to be at least at 2.1 trillion and I suspect it may need to be more." Sarkozy: Europe's "Liquidity Run" Has Begun Because There Is An Unsolvable $30 Trillion Problem | ZeroHedge

"The amount of funds that European banks sought from the European Central Bank (ECB) climbed on Tuesday to the highest level since April 2009.

The proof is in the puddin - "Chatter across European trading desks, since confirmed by the EBA, is that medium- and long-term funding in Europe is now completely frozen." European Liquidity Downgraded From Ice To Carbonite | ZeroHedge

"The U.S. Embassy in Damascus urged its citizens in Syria to depart "immediately," and Turkey's foreign ministry urged Turkish pilgrims to opt for flights to return home from Saudi Arabia to avoid traveling through Syria." Aircraft Carrier CVN-77 Parks Next Door To Syria Just As US Urges Americans To Leave Country "Immediately" | ZeroHedge


A chart from the private stock - Yes, believe it or not I know what this chart says. See the red diagonal from top left to bottom right (Uz this is the one I have been telling you about for months now). When that goes it is all over and we're sitting on it right now. This will be a good diagonal for a backtest corrective short entry in the future. Those of you looking for a corrective - this point may be your only shot. 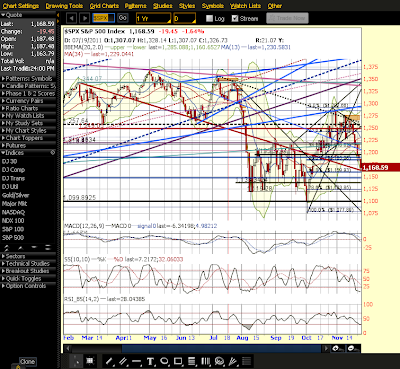 SPX Yearly - Just for perspective and cause you rarely get to see a yearly chart. Lower BB is 353 and that MACD bear crossed at the top in '07. It has some steam to work off I'd say. RSI just now at 50 line with plenty of room to fall. 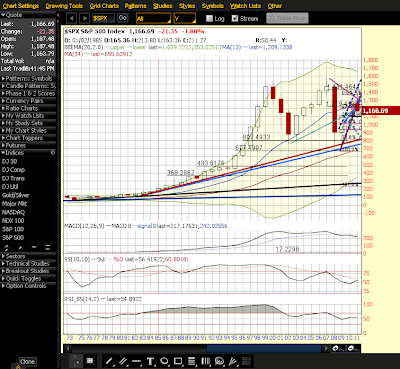 and pass me some more of that turkey will ya?
Posted by Shanky at 4:00 PM