Not sure where to start today, the news was so bad all around that it is hard to find a spot to start. Of course the DOW was up 178, so who cares right? You know when the FOMC meets, the belief in eternal easing runs rampant. Just the mention of the Bernank possibly buying more MBS, or the mention that they still have plenty of tools in the shed to combat deteriorating economic conditions market failure seems to cure all that ills.

However, even though the markets are totally blind to reality, the Fed has worked themselves into a corner. "Today, with inflation currently approaching 4% on a year-over-year basis the Fed is not only outside its inflation mandate of 1-3% but any further cost pressures on the consumer is going to drive the economy into a recession." And, "However, with that there is a bigger problem brewing, and one that has been set aside due to the issues with Greece, the "Super Committee" only has 22 days left to announce the spending reduction plans before the automatic cuts take hold. This won't be good." Guest Post: Fed Trapped By Inflation | ZeroHedge

The Fed's announcement today was dire. Not many have been all that hot this year.  The two main headlines I got from the Fed's statement today were - (both from FOMC Disappoints, Evans Dissents Wants More Easing: Full September-November Comparison Redline | ZeroHedge). These announcements with the rest that were chilling at best were enough to drive the DOW up 100 points. All it takes is a hint at further easing to motivate the algo bots to do the Fed's bidding to get markets higher.


How bad was the data from the Fed? (remember the market rallied on this report) Fed Slashes Economic Outlook, Raises Inflation And Unemployment Rate Projection | ZeroHedge

STB has been on the idea (really since August) that they need a major move south in price to make both the super committee debt ceiling vote and further easing much more accommodating. What I would like to see is a move higher here on speculation the G20 will resolve the euro/Greek crisis (they can't), and then a massive failure following the lack of resolution (and possibly a new Italy or France bond scare).

I don't think anyone can do jack shit till our debt ceiling issues are worked out. We all know that all funding (since China has a brain and will not get involved in this mass destruction) comes from the US taxpayer (via the Fed's printing machine). One problem there is that we have already SPENT HALF of the projected debt ceiling increase just to stay afloat to this point. We all know they can't fix anything and this will be another exercise in extend and pretend with the additional debt only making the end game that much worse. I am expecting them to do a massive increase, a surprisingly large number possibly over $2 trillion.

UPDATE: Dig this - "we believe the bear market rally is behind us and anticipate a move towards the 1,000-1,015 target over the weeks and months ahead." Citi: "The Bear Market Rally Is Behind Us; We Anticipate A Move To 1,000-1,015" | ZeroHedge. If that happens, there will be no recovery and you better be heading to the ammo and food store. Sadly you get a chicken shit chart - why not generate something like this that I have been showing for .....6 months to a year now? Oh, I have more and better charts, you all know that.

Here is a quick Ponzi review of the global economy -

Our job is to do nothing but consume. It is almost against the law for the US to manufacture anything. It is everyone else's job to manufacture and to sell to us. The way the Ponzi works worked was they would buy our treasuries and we'd use those funds to buy their shit.

This worked great till 2009 when they started selling more treasuries than they were buying (which has increased to record amounts of redemptions recently as the euro zone has had a desperate need for cash to keep things liquid). The treasury was forced to start printing money to keep the flow into treasuries going and that is where QE 1 and 2 and whatever version you would like to cite come in, and the US passed China and Japan to become the number one holder of its own debt. Yes, this is called monetization which Timmahhh said we would never do. End of Ponzi review.

That leads to this continuing bastardization of data being spewed from any source on the government payroll - the surprise today came from ""Conditions in the global manufacturing sector remained broadly stagnant in October. Levels of production and new orders fell slightly over the month, while new export orders declined at the quickest pace for almost two-and-a-half years."" Export Miracle Over! | ZeroHedge. Folks, were freezing up.

Let's move on to the EU crisis (as that was not bad enough).

"When was the last time the Fed postponed a US treasury sale due to market condition? I cannot find one although it is possible it happened at some point in a debt ceiling issue." Mish's Global Economic Trend Analysis: EFSF Bond Sale Postponed Because of Market Conditions; Fake Haircuts, Fake Help  These people HAVE NO ANSWER! China even balked at rescue attempts. The Fed (in the scenario discussed above) is about the only shot the EU has left and that will only deter the ultimate pain another few months. Heck, even the Fed told them to go get their shit together in September and what have they achieved? NOTHING!

What's the feeling around the G20 summit coming on the 7th? "The glamorous and easy-going Riviera resort of Cannes turns into a fortified camp this week as French police prepare for the arrival of world leaders for a G20 summit set to be hijacked by fears that a euro zone crisis relief plan is unraveling." Cannes sheds its black tie image for G20 riot gear - Yahoo! News. They got roughly 17 miles of road between the "leaders" and any sort of protest. this is unprecedented.

How good were things last night in the euro zone? "In the wake of Papandreou's Call for Voter Referendum on EU Debt Deal sovereign debt yields plunged in Germany and surged higher in most other European countries, but most notably Italy and France." Mish's Global Economic Trend Analysis: EU Deal Unravels from Many Sides; Italy, France Bond Spreads Hit Record High vs. Germany; Bund Yield Drops Most on Record; All Out Bond Crisis . The problem they want you to focus on is Greece. The real problems lie in Italy and France (not to mention the rest of the PIIGS and here in the US and any other rock you choose to look under). I'm pretty sure you have seen this - Greek 1-Year Bond Yield Hits 205% - yes, that is ONE YEAR BOND YIELD.


Here, in one glorious post you can read it from the horses mouth all of the issues facing the EU and why there is no "out" available for the spiraling debt crisis. Apparently some actually realize this pattern of bailout to sustain and pile on more unsustainable debt must end at some point and that point will not be pretty. This Is Yet Another Glaring Example Of Why The EU Is A Mind Blowing Failure

What would a Certain Death post be without throwing in a little middle east World War Three catalyst? Drudge has all the links. Israel should have bombed Iran a year ago September before they finished the nuclear plant. Stuxnet slowed them down a bit, but did not do the job. "The noon launch near Tel Aviv, which had not been announced in advance, coincided with a week-long surge of speculation in local media that Netanyahu was working to secure cabinet consensus for an attack on Israel's arch-foe." Israel test-fires missile as Iran debate rages | Reuters. And of course Iran fired back - Iran Rattles Saber at Israel,  - Israel National News

"As President Obama dusts off his 2008 theme of “hope” in anticipation of his reelection campaign, he has a problem to get around: Among young voters, one of his most crucial constituencies, hope is, like, so yesterday." Hard Economic Times Rob Young Voters of 'Hope' - Scott Bland - NationalJournal.com

/es minis 15m - Which channel - I thought the yellow one was it, then I got to drawing lines and came up with the green one. Two things for sure 0 1236 resistance and 1218 support. Of course this unchartable market will most likely throw another curve ball tomorrow. One thing tipping STB off is the lack of patterns or reliable signals from TA. I have seen dry periods, but not like this - thus - these are not normal movements in the markets. 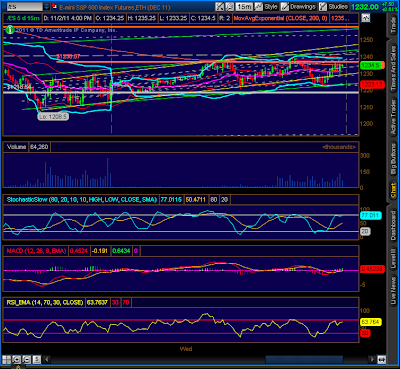 Remember to Duck and Cover when you see the flash. It can come at any moment.