UPDATE: Harbinger of DOOM - "If we continue to bail out banks and bankers so they can continue to lose money, if we cavalierly put this burden on the taxpayer, it is all too predictable what will happen here." Ron Paul: "It Is Estimated That US Banks Have Over A Trillion Dollars Tied Up At-Risk With German And French Banks" | ZeroHedge. And now you know why you keep bailing out the EU (with YOUR money) via the IMF, EFSF or whatever other under ocean pipeline they have to use. Remember the longer it takes for this to implode and the more money they throw at it, the worse the ultimate outcome. As noted here and on several other sites, the O-MFG, Jefferies, Barklays and today BlackRock events are all warning signs of what's to come. LEH will look like nothing compared to the next collapse.

I've told you for a long time that our financial and economic voodoo was the cause for all of this and that it would come back to haunt us. That time is apparently coming sooner than later. "Since the onset of U.S. subprime crisis in 2007, it was the country's domestic economic problems that triggered a disastrous financial crisis that swept the world. Excessive spending for many years has added up debts." Main China Daily Xinhua Pens Epic Anti-US Tirade, Bashes America As Source Of All Global Financial Ills | ZeroHedge

"Eventually the markets impose their will. It may be by destruction of the currency, something that both Vince Cable and Thomas Mayer fail to consider (or simply ignore) or the markets may impose their will with interest rates as has happened with Greece and Portugal." Mish's Global Economic Trend Analysis: Economic Idiocy or Self-Serving Bullsheet from Deutsche Bank Chief Economist and UK Business Secretary? General Rule Helps Sort This Out

"German Chancellor Angela Merkel said on Monday that Europe could be living through its toughest hour since World War Two as new leaders in Italy and Greece rushed to form governments and limit the damage from the euro zone debt crisis." Europe could be in worst hour since WW2: Merkel | Reuters

Your Elected Representatives and Insider Trading -

Read this - it will piss you off. Lovely the exposure of insider trading with congress benefiting on their actions prior to their implementation. With all the other corruption in DC and on Wall St, does this surprise you at all?

Insider Trading By Congress FINALLY Hits The Media in [Market-Ticker]

"Then-Rep. Emanuel reportedly sold up to $250,000 in Freddie Mac stock on February 21, 2003 days before it dropped by 10 percent — and weeks before it was publicly revealed that the entity was under criminal investigation for inflating earnings." Book: Rahm Emanuel Dumped Tons Of Freddie Mac Stock Days Before It Collapsed

"Unfortunately, it is not easy to get elected to Congress.  In this day and age you generally have to be heavily connected to those that are very wealthy to get into Congress because it takes gigantic amounts of cash to win campaigns.  But if you can get in to the club, you pretty much have it made.  The numbers that you are about to read are very difficult to believe and they should deeply sadden you." 12 Facts About Money And Congress That Are So Outrageous That It Is Hard To Believe That They Are Actually True

"Low-tech stock guru Warren Buffett drops long-standing antipathy to IT sector by buying 5% of IBM, saying he had been 'hit between the eyes' by its competitive advantages" Warren Buffett buys $10bn IBM stake | Business | The Guardian   IBM Monthly Chart Like i said in the comments today - either he knows something or he can't read a chart.

I've been telling you this will be a complete disaster and apparently 7 out of 10 of you agree with me. Let me see, the EU wass supposed to have something in writing back on October 23rd and still don't. What makes you think this crowd that can't cut hair much less a budget will achieve anything?

OK, so now we live in a world where radioactivity just starts showing up in the euro zone without any specific cause? Nah, no big deal. No need to worry. Levels are safe and this stuff happens all the time. Shuh...right.

"The Vienna-based agency said Friday it was working with its counterparts to determine the cause and origin of the iodine-131, which has a half-life of around eight days, and that it would provide further information as it became available." Abnormal radioactivity also in Hungary, no risk seen

Radioactive Iodine Blankets Much of Europe ... Everyone Points Fingers

Like he's got bad breath or BO or something - "Some up for reelection in red states or in swing districts fear that even showing up on stage with Obama will give their opponents an image to seize upon." Some Democrats refuse to back President Obama - Manu Raju and Marin Cogan - POLITICO.com

Oakland Mayor's Legal Adviser Resigns Over Raid and Says: "Support Occupy Oakland, Not the 1% and its Government Facilitators"

Must watch video of the song that will become the anthem of the Occupy Movement and possibly the coming revolution. The situation in which it was sung was amazing - to the potus and his crowd in HI. Quiet "Background" Musician for Summit Between Obama and Other World Leaders Instead Tells Them (For 45 Minutes): "Your Thievery Has Left the People Numb … We Occupy [Until] You Do the Bidding of the Many, Not the Few"

SPX Daily - Consolidating in a triangle at wedge support under long term resistance. Not a good clear spot for action either way (until the next rumor driven short squeeze happens). Remember, I'm calling a pretty serious November swoon. 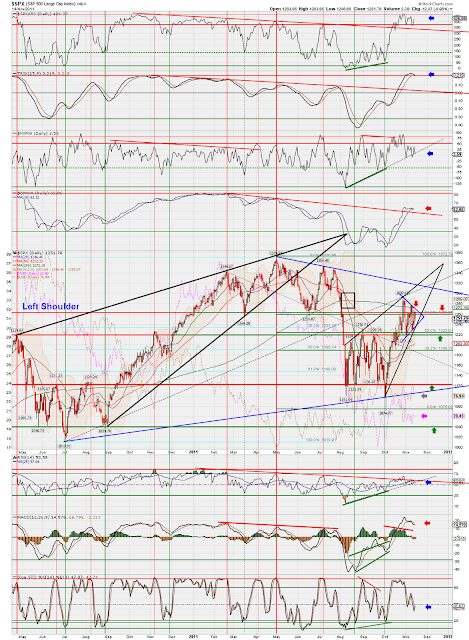