Sorry if these get a bit long, but they remain vitally important and are always fresh. Please take the time to read thru the post and click thru to learn more. I also ask that you share these with friends and family that need to be warned of the coming situation.

If there is one thing that should scare the shit out of you, it is the MF Global theft of over a billion dollars of cash from brokerage accounts just like the ones you have now. Where is all of this money and why has it not been returned to the rightful owners? Well after a MONTH of investigation apparently no one knows where all that money went. Now that is some real freaky scary shit right there.

For months we've been in a Ferrari burning it down the Italian mountainside testing the limits of the suspension and tires. Well, now those tires are getting worn and we've entered a particularly dangerous stretch of road near the mountain tops where no guard rails exist on the ever increasing hairpin turns. With each turn there is a little more fishtail and slide and it now appears one if not two tires are leaving the asphalt and getting into the slippery gravel on the shoulder.

A post you must read (if you can handle the truth, detail and length) covering everything you ever wanted to know about EU bonds and the issues they are facing, please read Apocalypse Postponed – For Now | Acting Man. "Of course the auctions are not a 'success' from another standpoint, namely the  yields which the governments concerned have to pay. Bidders are extremely reluctant and are demanding ever more compensation for the considerable risks they are taking."

One thing you must do is at least scroll the post and look at the charts. The two I want you to see, when Italian and Spanish bonds come due, really emphasize the "pulling forward" of maturities that I discuss, and the incredibly severe situation they face in 2012. Bottom line is no matter how large the bailout IF they survive 2012, the 2013 and 14 will be no cakewalk.

"We are on the verge of a systemic financial implosion that could very nearly wipe out the currency holdings (bank accounts) of hundreds of millions of people, and with each passing day, that long-postponed day of financial reckoning inches ever closer." Financial red alert: Europe stands on verge of ‘apocalyptic’ debt crisis with only days remaining Alex Jones' Infowars: There's a war on for your mind!

This is key (along with the coming FOMC meetings and EU meetings in early December) to investors right now. Read this quote and then go on to read the post. It is a real jaw dropper. "The ministers were discussing ideas hitherto unthinkable, now being considered in a moment of utter desperation. Among the previously taboo ideas being mentioned today are: countries ceding fiscal sovereignty to a central authority; some sort of elite group of euro nations that would guarantee one another’s loans but require strong fiscal discipline from anyone seeking membership." Euro Finance Ministers Discuss Radical Ideas to Avert Global Crisis - Yahoo! Finance. I'm trying to tell you it is a really bad situation over there.

So, does the Fed (US Taxpayer - STB's last big bailout) happen in the EU and not here? "The Euribor/OIS spread or`fear gauge’ is flashing red warning signals. Dollar funding costs in Europe have spiked to Lehman-crisis levels, leaving lenders struggling frantically to cover their $2 trillion (£1.3 trillion) funding gap." Should the Fed save Europe from disaster? - Telegraph. If you took the time to at least cruise the charts in the last post, you will understand this statement clearly. "One presumes that the Fed would purchase both the triple AAA core and Club Med in a symmetric blast of monetary stimulus across the board, avoiding the (fiscal) error of targeting semi-solvent states. In sense, the Fed would do quantitative easing for the Europeans, whether they liked it or not."

Speaking of theft and insider trading, boy would it be nice to have a direct line to the Treasury Secretary - "The secretary, then 62, went on to describe a possible scenario for placing Fannie and Freddie into “conservatorship” -- a government seizure designed to allow the firms to continue operations despite heavy losses in the mortgage markets." How Paulson Gave Hedge Funds Advance Word of Fannie Rescue - BusinessWeek

I've been featuring this for some time now. I suggest you take this seriously. STB is of the opinion that the war has already started with rockets falling is Israel, weapons plants mysteriously blown up in Iran and Russian and Syrian troops threatening to cut off US troop movement.

"the Senate is poised to vote today on the National Defense Authorization Act bill, which would allow indefinite detention of American citizens living within the U.S." Co-Sponsors of the National Defense Authorization Act: Bill DOES Apply to American Citizens, and Could Be Used Send Them to Guantanamo Indefinitely - Washington's Blog. Or they could just slap your ass in the nearest FEMA camp.

What's a FEMA camp you ask? You mean you do not know about the 72 massive permanently staffed prisons scattered throughout the country EMPTY waiting for something? Oh, I know they have been debunked - shuh, right - why don't you debunk these EXISTING PRESIDENTIAL ORDERS and camp locations - Friends of Liberty - FEMA CONCENTRATION CAMPS: Locations and Executive Orders. Folks, this shit is REAL! I am not making it up. Take the time to read the NDAA and what it does.

THINK ABOUT THIS - why are they pushing thru this bill now? Why do we even need such a bill that systematically destructs almost every Constitutional right you have? Because they know total financial disruption is coming which will bring massive riots and chaos. They need a law and a place to lock us all up, without cause, indefinitely. Again THIS IS REAL! This is not fake conspiracy bullshit.

Us good 'ol folks here in Gawgia can finally breathe a sigh of relief - Obama's Job Approval Drops Below Carter's - Washington Whispers (usnews.com). Yes, it was only a matter of time, but the Rodney Dangerfield of presidents finally gets his due. The man (term used lightly) we bash every day finally gets a rating he justly deserves. Want to know the really scary horrifying part of this dubious honor? "Back in 1979, Carter was far below Obama until the Iran hostage crisis, eerily being duplicated in Tehran today with Iranian protesters storming the British embassy." Ha, and people thought Bush II would cancel elections and become a dictator - I would not be surprised to see this one actually try it.

And Gov. Christie says it like we all love to hear, “I was angry this weekend, listening to the spin coming out of the administration, about the failure of the supercommittee, and that the president knew it was doomed for failure, so he didn’t get involved. Well, then what the hell are we paying you for?” Christie said in Camden, N.J. " 'It’s doomed for failure, so I’m not getting involved'? Well, what have you been doing, exactly?” Christie rips Obama over deficit talks: 'What the hell are we paying you for?' - The Hill's Video

Minis 60m - For those that do not read the comments I showed all of this in real time today calling levels and such. Green wedge/channel up off 1147 low. Broke thru yellow (old channel support off 1068 lows). Formed pink wedge at top. 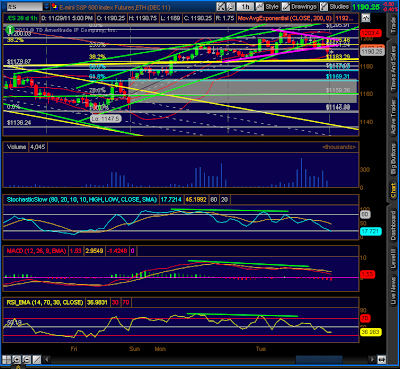 Minis 1m - In late trading busted green wedge/channel support as price consolidated in pink wedge. After testing wedge support one last time moved up to backtest busted green support and 1200 then you can see the fall. Pretty textbook stuff. I'm assuming the EU has another "rumor" tonight as the next chart is not good at all. 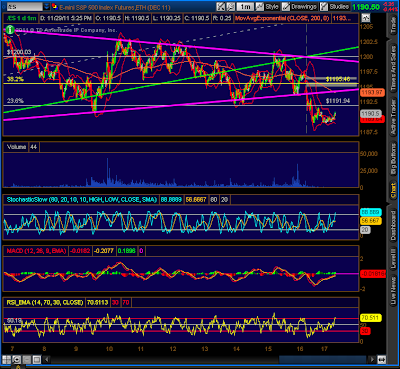 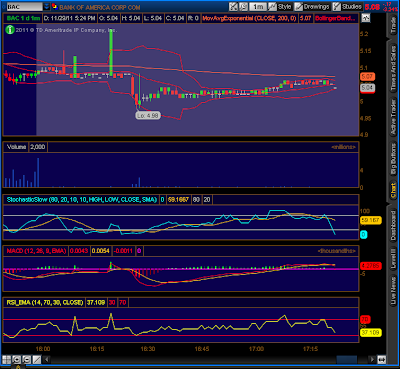 
"I beg to present you as a Christmas gift the city of Savannah."
William Tecumseh Sherman  - Not our finest hour, but I thought appropriate for the times.
Posted by Shanky at 4:32 PM