Not sure I need to cover the why the market is falling portion this morning. Not sure Blogger allows enough character space to cover all the reasons. What you need to know is they can intervene, but they can't stop it. Think about an "inevitable" situation in your mind. Go ahead, find one that you can visualize, and picture the slow, long, agonizing demise to utter and complete failure.

I picture skydiving and your first parachute was tangled, so you had to go to the backup chute. You pull the backup at 10,000 feet and notice it has a small rip.  Now picture that rip slowly growing and your decent picking up speed. At some point that chute fails and you are in free fall. Welcome to the euro zone and the global financial systemic collapse. At this point we're already on the backup chute and that rip is growing. The free fall part .... I think you get it.

I say I think you get it, but then most really don't. They can't wrap their minds around where we're headed. They see the markets and never ending intervention and something saving the system. It is like a really well scripted Hollywood horror show, except in this one, no one survives except the boogeyman.

I don't know what will happen, no one does. I had mentioned in the past that I was hoping that someone was putting together a disaster plan, and then Monday in the AD I posted where Germany, the US and China had openly dusted off the plans. There is no out.

As mentioned in yesterday's AD the funds flowing to Greece (just like AIG) are actually flowing thru Greece to bailout other entities. That $90 billion in Greek CDS? Really folks? How about all the bank exposure to the euro zone? Was the O-MFG event not enough with crime, corruption and over $600 million in client funds lost to the "system" not a wake up call. Jefferies lying and then dumping EU debt this week in a fire sale? Now this morning ZH reports Goldman Exposure To European Banks And Governments: $56 Billion.

Bottom line is we are beyond bailouts. We all know they only kick the can and wind up making the end game a far worse scenario. More will come. I've wanted to do a summary call/thought post, so more on all of this in the AD today. Stay tuned it should be a classic.

Minis this morning - First, let me say Cramer and everyone on CNBS are a bunch of permabull shills. Please turn off the volume. Second, everyone is expecting a bailout of Italy. Bloomberg radio put it best this morning - the EFSF and IMF combined don't have enough money to bail out Italy - and that leaves the rest of the euro zone where? Cramer - "Someone has to step up today." That is like saying someone has to throw $100 million into a furnace.

As for the chart - wedge support has cracked - 1236 support held. I have been saying anything sub 1241 would be danger zone which it is holding. Anything sub 1220 and it is game over. This fall will not be pretty. Patience still required. If you are bullish - don't be. You are about to find out just how much intervention power is left in their bazooka. It may stop the slide or cause a run up to some extent, but the markets have had their warning lights go off now. 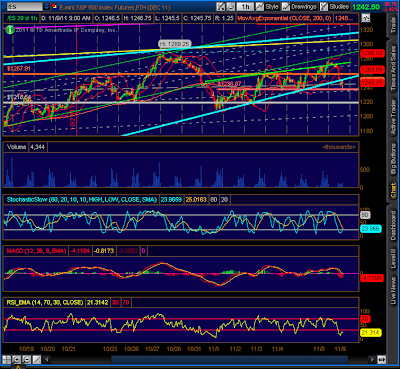 STB has correctly called a drop from the 1290 top and pop to set divergences, then for a really hard move south in November. LMAO - we have not even cracked the US debt ceiling issue yet. Talk about a shit storm coming. Today will be a moving target. I'm gonna keep calm and not rush to any conclusions quite yet. I have to consult the charts and all that will come in the AD post today. Yes, I think the fall has started and it will be nasty. 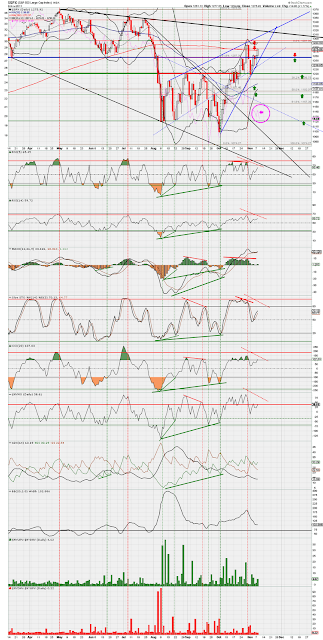 Don't forget the reason for the season!