Well, surprise, surprise, surprise another crisis averted (for now). The frequency of these events that used to be spread a year apart are now occurring in near weekly fashion. It won't be long till they don't avert one. The methods for each stick save are becoming increasingly adventurous as well. With Germany not willing to go all Wiemar again and China keeping its wallet in its pocket the end game seemes upon us as the lenders of last resort fall by the wayside.

In European Banks Find Depositor-Of-Last-Resort. For Now! | ZeroHedge has, "In our ever-so-humble opinion, this should be added near the top of the list of crisis canaries-in-the-coal-mine as the cracks of desperation appear more and more across the largest and most-levered financial firms in the world." This should scare the hell out of you after the O-MFG crisis and all the news in the AD last night.

They are now using ANY cash they can to borrow. This dangerous game has moved from sovereign funds thru central bank funds thru bank and corporate funds to the lender of last resort YOUR FUNDS. Danger Will Robinson. Danger! Danger!

You see the debt machine is a cash burning inferno. To keep the machine running it feeds on and burns cash. That means that every dollar that goes into the furnace that is one that is you are not getting back. Sadly that does not mean you and I still do not have to pay for that dollar that once existed. This machine will only be stopped when it is no longer being fed. The food sources have dried up to the point that our cash is all that is left. When this nuclear winter hits, just like the dinosaurs, the banks will wither and die. When they die, everything dies.

As I predicted in 2008, the only way for this to end will be massive global default. We often discuss guns, ammo, seeds, food, gold and silver, is there any question as to why now? Part of the STB ultimate crash scenario is that ALL asset classes would sell off, yes, even gold as the rush for the exits occurs. Gold will experience the rally of rallies as EVERYONE rushes into gold and out of everything else at some point. Paper gold (GLD) will be a very dangerous place to play as it does not have the physical to back up the fund.

The markets did not experience true capitulation in 2008 (everyone running for the gates at the same time). You will get that this time as those that (are still in) hung around thru 2008 will have no desire to participate this time. STB has predicted a minimum of two market closures in this fall and they should occur in the 3rd waves of 1 and 3. We're close to if not in the 3rd of wave 1.

The Germans get this. China gets this. So, who is next to pay for this insatiable feeding frenzy that demands more fiat be printed and created out of thin air to keep the Ponzi rolling limping along? That would be you and me. This says it all, "In the end, there is no private bid for any of this paper." Jim Cramer. LOL and he'll still tell you to buy, buy, buy!

SPX 60m - 38% retracement and 1220 support. On the cusp a single straw from collapsing the camel's back here. My November swoon is looking like it has potential to come storming in. Is it too early to start talking bank holiday the way we have the last two Thanksgivings? The super committee has a busy week next week. You know I think they fail. 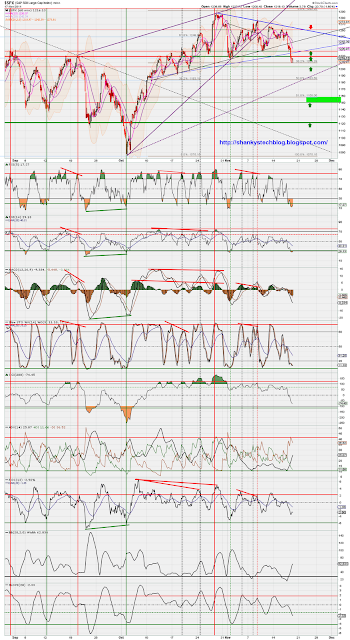 Minis 1m - There are the levels. 1236 upper Vband and resistance. The green busted wedge support that is now resistance as tested this morning. The VWAP at 1222. The 1218 level that I have been discussing for months. That new pink lower possible channel support diagonal that I introduced yesterday and have been showing for a week or so. The lower Vband and 1200 round level. 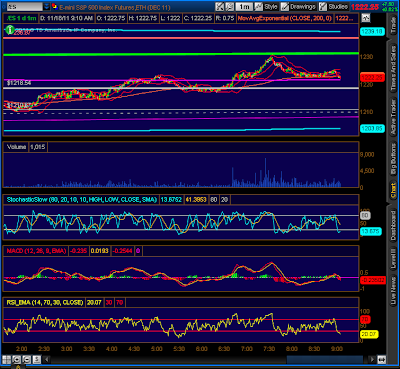