It is only a matter of time. Can the bears remain solvent?

"2) the German taxpayer became the Eurozone's "de facto bailout provider."  Mayer proposes a "Chapter 11 for Eurozone countries," which would place troubled members under economic supervision until they put their house in order." Wikileaks Exposes German Preparations For "A Eurozone Chapter 11" | ZeroHedge

"As the European debt crisis edges closer to a break up of the euro zone, financial regulators may be reaching for emergency manuals that have gathered little dust since the last crisis." Analysis: U.S. bailout manuals handy if Europe crisis widens | Reuters

The EU is just a total mess -

"about two-thirds--reported having tightened standards on loans to European banks over the third quarter. Many domestic banks indicated that the tightening was considerable." Calculated Risk: Fed: Banks Tighten Lending Standards to Banks and Firms with European Exposures

Wall Street Journal Lays It Down: "Merkel And Sarkozy Have Lost Credibility" | ZeroHedge

""If you look at the troubles which happened in European countries, this is purely because of the accumulated troubles of the worn out welfare society. I think the labour laws are outdated. The labour laws induce sloth, indolence, rather than hardworking. The incentive system, is totally out of whack." Jin Liqun: Europe induces 'sloth, indolence' - Talk to Al Jazeera - Al Jazeera English

More Lies from the Broker Dealers -

"Look for the vigilantes to comb through any and every 10-Q with a fine tooth comb and punish any bank that still has any exposure gross or net." So It Was An Issue After All: Jefferies Cuts Its Gross PIIGS Sovereign Debt Exposure In Half | ZeroHedge

"Jefferies Group Inc (JEF.N) the mid-sized investment bank trying to distance itself from bankrupt MF Global Holdings Ltd (MFGLQ.PK), said it reduced by half the gross positions in sovereign securities of certain European countries it had on Friday." Jefferies cuts certain Europe positions by half | Reuters

Move your Money a Huge Success -

Just add all the issues from the BD's as documented above to the MF Global scandal (investors lost over $600 million) to the already discontent populace. This is awesome.

"With November 5 being hailed as Bank Transfer Day, the final day in a month-long demonstration to move money from out of the big banks and into smaller, localized credit unions, the tally of those that took up the cause has come through and it shows that the movement was more than just a fluke. Leading up to November 5, $4.5 billion was taken out of major financial institutions." Billions of dollars moved in bank transfer demonstrations — RT

Daily Obummer Bashing (cause it is so easy to do) -

Sorry, but this ain't right at all - Why don't they just say it is an election year (and even if it was not) so we don't have to give you jack. "The White House on Friday all but refused to turn over the documents House Republicans have subpoenaed on bankrupt solar firm Solyndra, firing off a letter saying the request would put an "unreasonable burden on the president's ability to meet his constitutional duties."" Obama Fights Solyndra Subpoena - Solyndra - Fox Nation

What to look for -

SPX 60m - at resistance with some divergences possibly setting here - that does not look good at all. On the other hand maybe that wedge still needs a run up for the E touch or overthrow before we get a major move south. 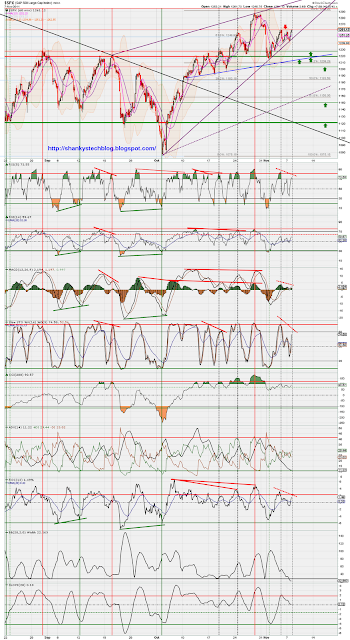