I'm not sure where to start tonight. Bottom line is the system has come unglued and is unraveling at a pace that even the central planners can't keep up with anymore. Whatever topic you want to address debt, war, corruption or a plethora of other potentially systemic issues they are all getting worse. And the naysayers come out of the closet and say Shanky is a nut, don't listen, as proof the DOW was up over 400 today and 800 points over the last three. Be my guest to take that road. I'll firmly stay on the one less traveled.

Last night in the AD STB wrote about "Living on the Edge". The markets and governments pressing the limits of the system. Well apparently the system or a bank had been pressed beyond the limit and the central planners had to move directly into rescue mode to avoid another LEH incident (which apparently was known to have been coming).

I remind you to not get lost in the illusion that the markets are creating that all is well and you need to remain in full risk on mode. When you add up the pieces below you will find that we came within literally hours of massive systemic failure and only the stick save action of the central planners that saved the crash caused the ramp this week. That's right, from the brink of total disaster to adding 800 DOW points and NOTHING has been fixed or solved (nor will it ever be).

What got all this mess started last night was S&P Cuts Credit Ratings on Several Large Banks - US Business News - CNBC. Yes, the market rallied over 400 points the day after 15 large banks get downgraded. That sparked the release of the following ...

The news flow from Zero Hedge this morning explains it all and the reason for the massive stick save ramp. "Need a reason to explain the massive central bank intervention from China, to Japan, Switzerland, the ECB, England and all the way to the US? Forbes may have one explanation: "It appears that a big European bank got close to failure last night." Did A Large European Bank Almost Fail Last Night? | ZeroHedge

Let's add to that "It also means that the decision was leaked on Monday, and explains the relentless surge in stocks since then despite progressively worse news out of Europe. Q.E.D. - a plan so good Hank Paulson could have leaked it to his hedge fund buddies." Fed Made Decision To Bail Out Europe On Monday | ZeroHedge. So you now not only have a bullshit bailout that solved nothing, but you have added to the pile of corrupt insider actions to profit on such an event (as highlighted here and in several other major news sources over the past few weeks). 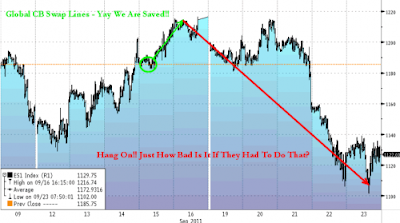 This bullshit cycle of stick save, pump the markets, paint a pretty picture that all will be well and they have everything under control is just that, bullshit. Remember the record October rally. Well that was all because the EU had until 10/23 to get their act together and come up with a solution to the problem. Well, here we are coming into 12/01, and they still have no solution and apparently can't find one. Europe delays major debt decisions for 10 days - My Way News. You see politicians spend, they don't cut.

They can't cut. For Austerity measures moving retirement age up two years that saves a trillion dollars over the next 50 years is no solution. They have to literally cut trillions NOW, and that is not possible. You see these countries are so deep in debt that they are bankrupt/insolvent. They may as well close the doors, that is how bad it is. The bill for the debt load from spend and pretend policies that garnered the global growth and prosperity over the last 20 or so years is finally coming due.

Hear it from the horse's mouth, "The finance ministers, who were meeting ahead of a full Ecofin summit today, acknowledged the €440bn (£376bn) fund would not win support to leverage it up to €1 trillion. Its capacity would be between €500bn and €700bn instead – a total that is unlikely to be big enough to rescue Spain and Italy." Mish's Global Economic Trend Analysis: German Finance Minister says "Big Bazooka" Not Ready, Would Not Stem Crisis, Even IF it Was; Plans Too “Intricate and Complex” for Investors to Understand.

Did you catch that "leverage it up" part? You do know what got us into this mess right. Fractal lending, leverage, taking collateral and lending/spending it 30, 40 or even 70 times over. And here they are looking at levering the bailout funds. Amazing.

STB has been harping on this for years, so regular readers know this. Whether it be in the employment numbers or CPI or GDP, pick your poison, but whatever economic data that is presented is total bullshit. And who funds and pays the bills for all these reporting agencies? For years now I have been comparing our country's fiscal reporting ethical demise to that of China. Well, we've finally reached parody with Big Red.

"Not one indicator has come below 4 standard deviations above the average forecast, and every single one has printed above the highest forecast. It is now safe to say without any doubt that US data is equal if not more equal in credibility terms with that of China." US Economic Data Reporting Now Officially A Farce: Every Economic Data Point Prints 4+ Std Devs Above Consensus | ZeroHedge

STB has been crowing about this every afternoon for weeks now as well. Did you see this headline? "China Will Not Hesitate To Protect Iran Even With A Third World War" | ZeroHedge. Never mind the fact that the war has probably begun. Missile bases in Iran mysteriously blowing up. Missiles landing in Israel out of nowhere. Embassies being overrun. Diplomats being asked to leave foreign nations. This is no big deal. Pay no attention to it. (/sarc)

After watching the vids on the Daily Paul that Soup sent me earlier (must see if you want to understand how the elite/money/debt/slave system works I went into one of my Casey/Shanky state of minds and came out even more afraid than I went in. STB has discussed war in recent posts as a distraction to the financial implosion that's coming (not to mention that never has a depression like the one we are in ended without a major war).

My fringe tangent thought of the day - eugenics - the elimination of people from the planet. They must eliminate masses of the population to bring the financial system back into balance. I believe out of this war (which will not kill enough unless they get to nuclear winter stage) will have the release of a killer biological weapon that does great damage to the populace of the planet. Chew on that one for a while.  This should handily eliminate a mass of the overly dependent/unproductive group that is a drag on the system.

Obummer Bashing! - cause it is so easy to do -

"In case the president is unaware, England forms part of Great Britain, which also includes Scotland and Wales, though not Northern Ireland, which is part of the United Kingdom. There is no such thing as an “English” embassy anywhere in the world, and there hasn’t been one for several centuries." Does Obama Know the Difference between Great Britain and England?

Czar Obummer (who may realistically cancel elections at the rate he is establishing policy that destroys the Constitution) I'm sure has handlers listening to every word STB prints. I don't want to wind up like this person, LPS Foreclosure Fraud Whistleblower Found Dead (Updated) « naked capitalism. (h/t RC)

This shit is real people. You can not deny it any longer. Read the headline below. It says, "Senate Bill", which means this is real and not some conspiratorial bullshit. “A Middle East Dictatorship Has More Democratic Accountability for Abuse of Power, Including Torture, Than the US Under Obama” Senate Considers Bill AUTHORIZING More Torture

DOW 60m - You read the post above, and the one yesterday and the one before that. Is this deserved? Hell no! All because we stave off a major LEH disaster the markets celebrate with an 800 point DOW ramp? Folks the game is rigged. This is not you and me participating in this rally (you could not have participated in it if you wanted to, a huge majority of the gains came overnight). Do you realize that out of a move of 780 DOW points. those two big candles in the first hour of trading account for 679 point or 85% of the move? Want proof retail is leaving this BS market? 14th Consecutive Week Of Stock Outflows: Retail Refuses To Go Back Into Stocks No Matter What Market Does | ZeroHedge 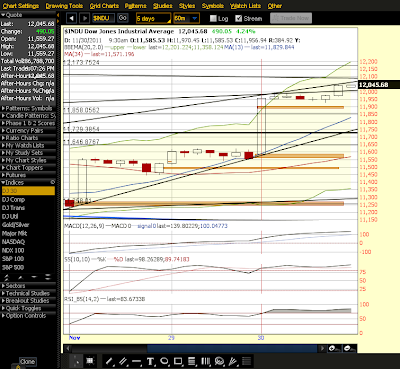 Christmas is a necessity.  There has to be at least one day of the year to remind us that we're here for something else besides ourselves.  ~Eric Sevareid Christmas Quotes, Holiday Sayings, Poems, Verses, Greetings
Posted by Shanky at 4:42 PM