Not much to say this morning without rehashing the obvious, Europe in in deep trouble, America is in deep trouble and the financial system supporting it all is in even worse trouble. AS STB began to point to a few months back around the first Debt Ceiling debate in July, I believe the financial masters of the universe are finally seeing the light and may actually be tired of throwing good (well what's left of good) money after bad just to save the banks.

STB speculated that until the US debt ceiling is raised significantly and the Fed enters QE land again the euro zone would be on its own. Well, they have proven that without stealth funding from sugar daddy Bernanke they are capable of .... nothing. They can't fix the issues alone. China or the Swiss pop in for a EUR stick save every now and then, but bottom line is the EU is screwed. No, this is not Germany's fault. the former Wiemar state is proving that at least one country on this planet may have actually learned from its mistakes in the past and is not willing to repeat them.

So the markets now react solely on the "news" events and fundamentals are basically meaningless. This "recovery" can only last so long. Traders will have to deal with it. Take this mornings rise in jobless rates, does it really matter if we have lost over 400k jobs a week for almost half a year? Apparently not according to the futures.

Minis this morning are paying between former support and former resistance - they have swapped roles after the apex of the triangle. STB had been cautious after presenting what looked like topping 5, 10 and 15m charts near the close Tuesday. The 30 and 60m were not there yet.

SPX 30m - After the churn yesterday the 30m chart is finally showing a few possible divergences. STB will be paying close attention to that busted resistance diagonal. Potential double top here. It looks like a higher high will be set this morning after the open which opens up the possibility of a run to the upper channel diagonal. 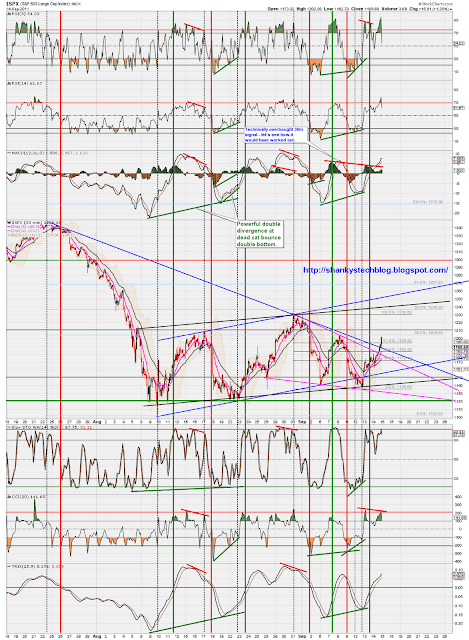 Not really much else to go on as the markets appear to be trying to break out here on nothing but rumors that the latest stick save will be successful enough to keep the doomsday scenario away for another month or two. I'll be all over the minis all day as usual and supplying updated charts in the comments section. The "core" (as they will now be referred to - yes, my commenters that dutifully work as hard as I do below now have a moniker) are there as well supplying even more data and news to learn from.