Nothing good is happening right now. As STB has speculated "they" are in trouble and their hands are tied till they can get some room with the next debt ceiling vote and get the budget issues straightened out (like...who needs a budget anyway as they approach 900 consecutive days without one).

As I was speculating back in June (when STB called for July to have the potential to be one of the worst months ever - It topped July 7th) financial blackmail is happening via market levels as "they" will tank the market to force congress into a more accommodating debt ceiling raise. This is all political.

I love it when the stars align with my prognostications.

Rosenberg Presents The Three Ways Bernanke Disappointed The Market, And Why It Is Dumping | ZeroHedge


Quick shot at the Rodney Dangerfield of presidents - "No respect I tell ya."


This is a must watch video. Sad when "the most powerful man in the wold" is the punching bag of Washington. The issues in DC as STB has been spot on from June as well (calling the massive dissent going into the debt ceiling vote and for it not to occur till the 11th hour of Aug 2nd) are about to froth over again. Heck, right now they are meeting to see if the government can stay open after the end of September for goodness sake. What, is Geitner about to start borrowing from the pension system again to keep them at work?


The charts are interesting, as bearish as all the above is - the divergences are pretty strong and price is just at the extreme bottom of the recent range. The bond market is just sick, and the dollar is exploding. That is telling me not to pay attention to the TA at this point. STB has been on 1040 since the July top (actually the 1345 Fukushima top before that) and is still in that camp. Unbelievably that is looking conservative at this point.


Just in case the divergences are real - lets look at this 10m SPX chart that says a corrective may be coming before more weakness. 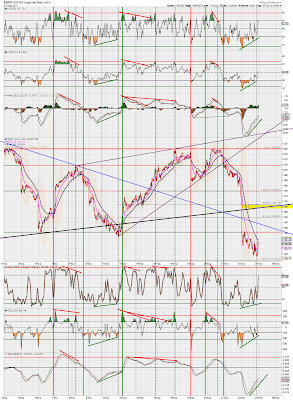 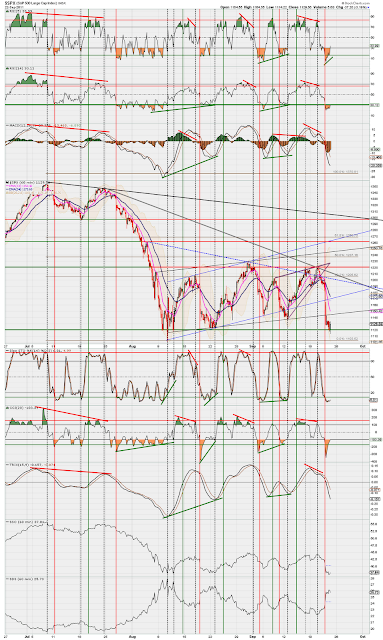 HOUSEKEEPING - Sorry for the issues with the Disqus comment system. thanks for the emails and other notifications of the issues. Looks like STB can't catch a break between the hackings and other issues. I am working on the backend with Disqus to get this ironed out. Trust me, no one is being intentionally shut out. Thanks for your patience.