If you have not seen this post and the video in it, please do so now - BBC Speechless As Trader Tells Truth: "The Collapse Is Coming...And Goldman Rules The World" | ZeroHedge

This is just lovely - U.S. Government Used Taxpayer Funds To Buy, Sell Weapons During 'Fast And Furious,' Documents Show | Fox News "Not only did U.S. officials approve, allow and assist in the sale of more than 2,000 guns to the Sinaloa cartel -- the federal government used taxpayer money to buy semi-automatic weapons, sold them to criminals and then watched as the guns disappeared."

Same tax rate as a Jew? What? New gaffe: Obama confuses Jews with janitors - latimes.com "Now, watch the C-SPAN video below, and listen especially to the phrase "the same tax rate as a janitor...""

Mr. President, are you listening? Americans Express Historic Negativity Toward U.S. Government "A record-high 81% of Americans are dissatisfied with the way the country is being governed, adding to negativity that has been building over the past 10 years."  The funny part of this chart is it looks just like the SPX did under the QE2 ramp. I have to ask - why would markets be at these lavels with such mass dissatisfaction out there? Cause they are controlled by the 5% that don't give a shit about the rest of the country.

Daily SPX - here are the divergences I have been referring to since last week. Very bullish. 30m 13/34 cross should give you at least two more up days if trends hold. I personally am going against TA here (in spirit - not with my wallet) as I just can not buy this move (yet). Rule one we preach here at STB is do not fight the Fed. Today rumors of a stronger QE came out. Ah, you gotta love a rumor driven ramp job. It is possible that I am emotionally conflicted here. Does not happen often, but willing to admit it. 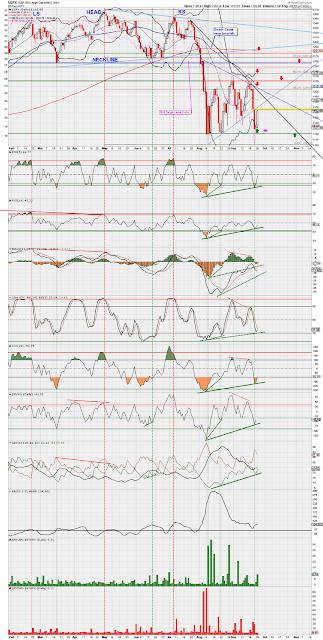