F Day, as in FOMC Fed announcement. Let's hope the F does not stand for anything else as in Fing the people of this country even further than they have already been F'd. Around 2:15 the fireworks start.

Shanky nailed the call last Friday warning those that wanted to short over the weekend at what looked like a beautiful set up. You can not short mere days before a FOMC announcement. Today is the day we get clarity. Now will be the time we'll be able to invest with at least a bit more confidence in a sustained trend (say the next week which is about as sustained as anything gets in this market).

What do the readers of STB think the Fed will do today? Will the Fed ease was the question. (Thanks for participating in the poll.)

Shanky thinks the Fed can't ease till the debt ceiling issues are cleared up. This moves the November meeting to a higher probability. This has been my call since the spring and I'm sticking with it. Where STB's language has changed a bit is now the Fed can move from the "ability" to ease to the "promise" to ease at anytime. A year ago all it took was a promise in August to ramp the markets for free (or without any easing) till the November announcement.

STB has also noted the diminished returns on easing. QE1 with the smallest pot got the largest reults. QE2 took the markets to the max with double QE1's funds but had less of a percentage return. Now tell me, what can QE3 do for the markets other than maintain these lofty levels and extend the illusion all is well?

Remember STB's position is "they" must save the markets at all cost to preserve the illusion all is well and to save the retirement system of the entire country. This is war and they are fighting the system they created. Sadly they (in this case the banksters) have destroyed massive amounts of wealth all in the name of greed and large bonuses.

Sadly the markets have reacted to bad news as well as good in a positive manner. It is almost as things get worse the promise of more easing is a shot of hopium to the markets that are gambling the fed will ease and it will work.

The question becomes - is the Fed willing to let the market fall to the 1040/1010 levels of a year ago before finally pulling the trigger? (you ewt folks think this is a large 4th wave corrective and I agree - a 5th takes you to near my LT 1040 target.)

Greece is in really bad shape. What is amazing is the markets react and ramp to the fact that someone is even having a conference call to solve some issue. It is pure insanity right now. Bottom line is I believe they are meeting not to solve the issues with Greece (that are unmanageable at this time) but to contain the fallout for when they finally default.

Following the Siemens withdrawal earlier this week, now we have Euro Bank Run Shifts To Insurance Companies As Lloyd's Of London Pulls Cash From European Banks (ZeroHedge). Folks, the EU financial system is on the verge of complete collapse. The liquidity issues most be astounding. This is worse than a bank run by the populace. This is corporations leading the charge knowing what's coming.

Don't listen to the CNBS BS about companies holding cash on the sidelines and ready to invest and all the growth that will come from it. The insider selling ratios tells the story. They have not "invested" those funds for a good reason. They know the system is busted. When companies start pulling funds from banks and moving it to central banks for safety, you should be very afraid.

As for home - not sure if you saw the threat from Reid that the government here could shut down by the end of this month. That one came as much a surprise as the stealth debt ceiling vote a few weeks back. This budget deal will get very very ugly.

SPX 60m w/ 13/34 ema - Nice divergence on the indicators. It was about a week ago I showed the 15m and the shorter time frames ready to turn and walked you thru the fact we needed to wait on the longer term indicators to confirm. then the 30m crossed and we got a fall, but the 60m was not ready and STB called a simple corrective. Now we have to pop to the double top at 2010 April high resistance. This is a beautiful short opportunity. Sadly, you can not trade it till the FOMC meeting results are released.

If this is the right shoulder that so many are now pointing to, the results target SPX 1040 which is where STB has been since the move from the 1370 top. Sooner than later the rest of the world will catch up to the larger Head and Shoulders STB has been on for well over a year now. Fall to 1040 neckline and then recover via the last round of stimulus for the Right Shoulder to the election (or first debt ceiling vote in 2013) then the big whammy finally hits (if it does not crash at anytime before then).

Note you 13/34 followers that the 13/34 is having limited results in this choppy market and that TA is pretty much whipping its butt as far as timing goes. 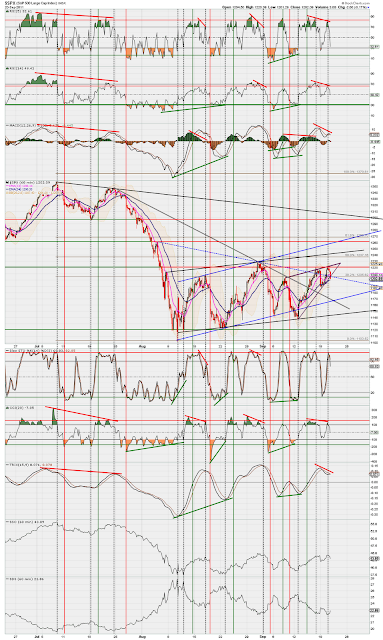 Index Comparison 30m - How is your favorite index performing? 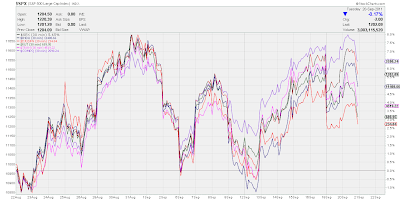 /es 5m minis chart for reference - As I call the day below, refer to the items in this chart - I also change and update this chart throughput the day to keep you updated.

I had to show a 5m chart this morning. The minis are really in no man's land taking out all support after battling with resistance all week. 1178 is all that is left for support. This looks very dire to me here. 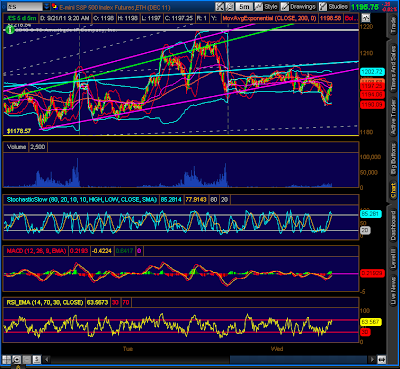