Other than global default the news of oppression in the land of the free may be the most important thing to be paying attention to at this time. Two stories over the weekend stand out. First the crackdown on the Wall St. protests that the government is obviously growing tired of. Pretty sure the powers that be are saying, (in your best Thurston Howell III voice) "Won't these people just go away?" and have made a few calls to make that happen.

Police Brutally Suppress Wall Street Protest is a post from Washington's Blog you must see. What happens when police grow tired of peaceful protesters? Take a look for yourself. Brutally arrested for just standing on the street talking to a cop. Pepper sprayed for just standing on a street corner? Won't be long till some maniac cop shoots someone. Think I am exaggerating? Video evidence proves it. Bottom line is tot the "system" these people are out of line. They are disrupting the peace and need to go home. WRONG! These people are being American and displaying their Constitutional rights.

Want to expand the police state to a non governmental agency? Sure why not! Here Comes FIATtackWatch: Ben "Big Brother" Bernanke Goes Watergate, Prepares To Eavesdrop On Everything Mentioning The Fed from ZeroHedge paints another nasty picture of the deterioration of our freedoms and expansion of the police state. Welcome to STB a new handler v 2.0 since fraud, Bernanke, market manipulation and a few other "distasteful" tags are used almost every day on this blog.

Want to know what reality is like at the hands of this government? To put it in its most basic form watch this.

Bottom line is that STB told you back in 2008 this was all coming. Sad part, this is the just the beginning. I told you that none of this would end till we were all driven to the streets in anger. Let the games begin. As noted, I'm not sure how we will ever recapture our freedoms (That is a sentence that is sure to get this blog flagged on every government crawler.) When I told you this country would resemble Argentina at its worst before this all ended I was not kidding.

Christine Lagarde: IMF may need billions in extra funding from the Telegraph is good for a laugh this morning. Of course the markets are up 15 at the open on this news. All is well. Get out there and buy.

Sorry, but this morning I really could not give a shit what this rigged piece of shit market does. I am so friggin tired of all the can kicking and hopium bullshit. I'm experiencing a brief moment of utter dissatisfaction with everything market related right now. I'll report it and call it as I see it. Just letting you know another rant may be in the near future.

Expect "additional" monetary actions from the all seeing Fed after the next breakdown to the 1040 level. They are using Fed speak after the last QE announcement to bolster the markets hopes that a real QE event is  or could be on the horizon. This TOTALLY NAILS the STB call expecting one last giant stick save and that the Fed kept their last bullet in their pocket. A fall to 1040, 1010 or possibly 950 then they pull the trigger one last time.

Daily SPX - Support, possible divergences and the NYMO bottoming may mean a move to the top of the recent range is in store. I don't see it going beyond that. Bottom line is that at this time you have to invest with the mindset the next LEH incident could happen at any moment. 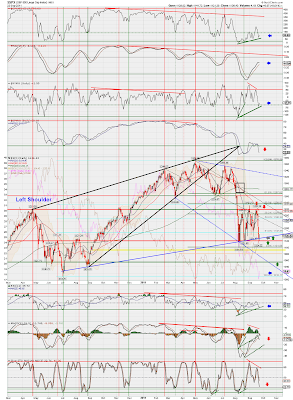 SPX 30m - At this time it looks like up is still in the cards. How long? That is not certain. I don't feel all that confident right now. I think upside will be severely limited with the news overhanging the markets.I'd play long with a scalp only mentality at this time. 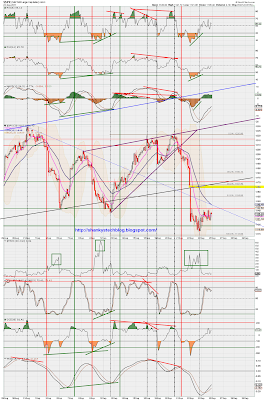 Minis this morning - 1m /es SPX - Pretty self explanatory - I'll refer to this chart in the comments section below describing the markets moves. I will also update this chart as necessary. 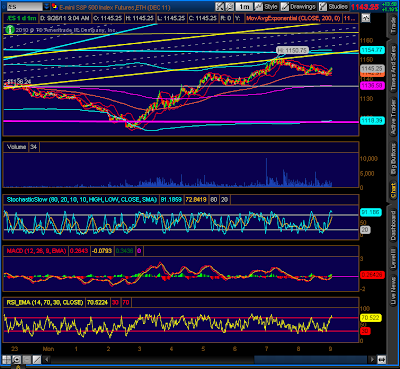 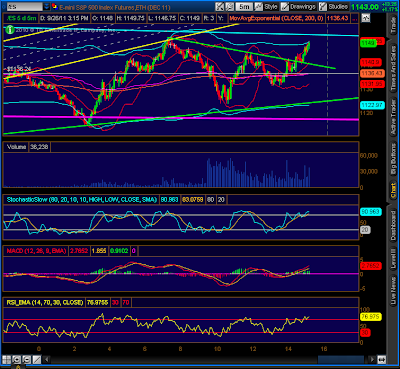