HOPE reigns. Ah, we live in the glossy world where the governments will take care of all problems and issues. Hakuna matada mate. Never mind joblessness or housing or hunger or never ending wars or MENA issues or inflation or DEBT or liquidity issues or CDS spreads or bond yields or systemic risk or under capitalized banks - none of that matters. The governments and central banking will take care of everything. As long as the markets maintain acceptable levels and appropriate rumors are floating then all the issues will be addressed and all is well.

Makes you sick, but that has nothing to do with investing. Sadly we've moved from a Fed/QE driven illusion to a rumor supported farce (or BS as noted in a recent tweet). Which is worse? Bottom line is Greece will rear its ugly head again in a few months (actually they are not out of the woods yet as, again, we only have rumors that all is well). After the first bailout they made it a year, then after the second about 6 months, now it is almost a monthly issue.

Debt and economic issues at home are a total afterthought. Ever wonder when reality will finally strike here? I am assuming with the next debt ceiling vote we'll get a wake up call. Markets (and GS) are on their knees begging for another round of QE (that last $400b thingy did not count). Two Fed speeches today may shine some light on that. Bottom line is at home things are really bad and the markets are anticipating another really large round of stimulus to give things a lift around here (well, they will lift bank stocks and the Russell 2000, but as proven it will do nothing for the economy other than make the debt situation even worse).

Daily SPX - I had been showing since last week the divergences set on the double (or triple) bottom SPX 1120. I also pointed to the bottoming NYMO that has been spot on for a while now as a turn indicator. I had been warning not to short yet and that a turn may happen early this week (still looking and waiting for that one). Facing EOM and EOQ pressures for statement prints, now it is looking like the upper end of the range (1220) may want to be tested. Never fight the Fed or rumors that all will be well or that a larger easing may be on the way (no matter what reality is). You are playing the markets not the economy. 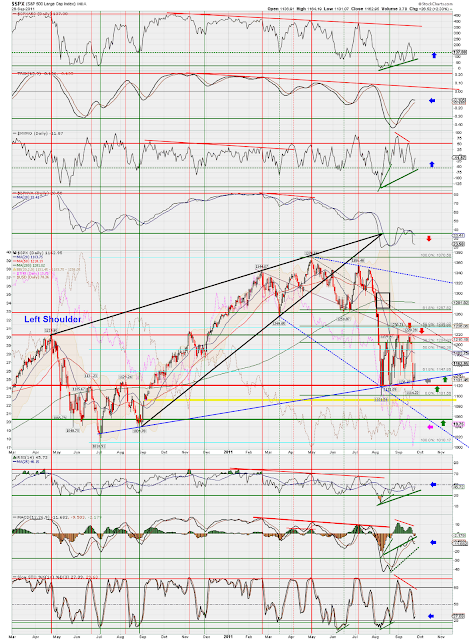 SPX 60m - Interesting the 50/88ma crosses have timed the tuns (inversely of all things - see black circles) very well. Also this is a good close up of support and resistance for SPX. 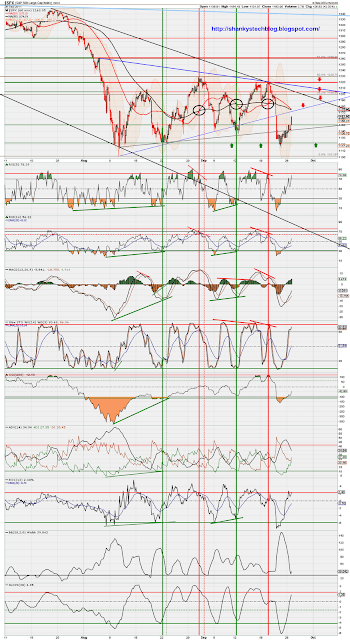 Minis - I'll refer to this chart throughout the day. 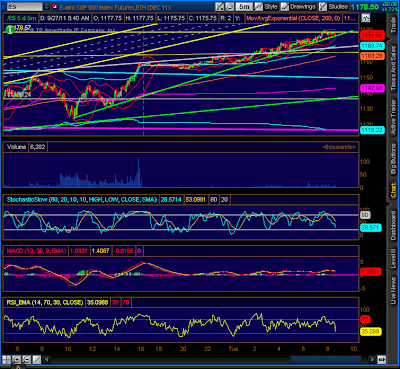