STB and its readers have known for years this was coming. The debt math (as we constantly refer to) is simply too much to overcome for Greece. I believe the global central planners are finally coming to this conclusion (not the Fed, but most of the rest I believe) and are willing to throw in the default towel. They see the money wasted playing extend and pretend. Maybe, just maybe, someone will act responsibly and allow the system to reset, check the debt, take the medicine so we can finally get on to true healing and recovery.

FOMC meeting this week. The ultimate in extend and pretend crowd comes out Wednesday. See the poll on the blog (above to the right) and voice your opinion if the Fed will ease or not. I don't think they will truly ease (as in trillions) until the debt ceiling vote in November is cleared. That is not saying they won't "promise" easing which would have the same effect on the markets (remember- they have to protect market values at all cost to keep the illusion alive that all is well).

FOMC meeting chart - Not much to say. The chart speaks for its self. There are some major moves in market price associated with these meetings. For that reason STB will most likely remain on the sidelines till the Fed speaks.

Minis this morning - Refer to this chart as I discuss support and resistance during the day in the comments section below. (no external links to this chart) 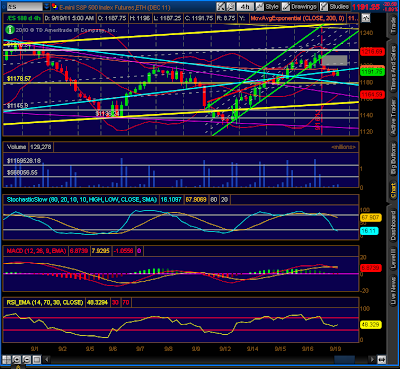 SPX 30m Comparison - most followers know I love the 30m chart and the 200ma. This chart gives that and the recent patters (with support and resistance for the major indexes. 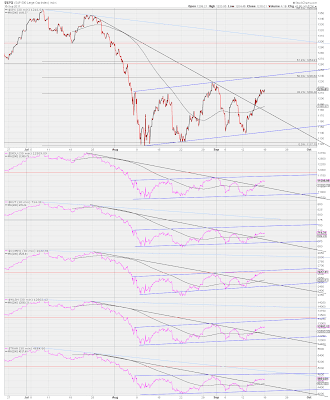 30m Index Comparison chart - How is your favorite performing in relation to the other indexes? COMPQ was leading showing the most strength by a long shot. 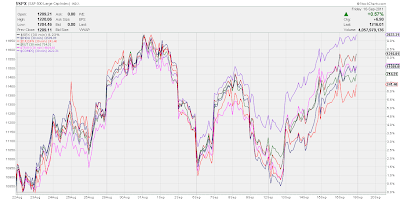 10m SPX with 13/34 EMA - As mentioned Friday SPX closed right at the bring just shy of confirming a short entry point at major resistance (April 2010 highs). Should have all sorts of short entries triggered this morning. I caution you as I did Friday, this is a dangerous spot to get short in front of an FOMC meeting. 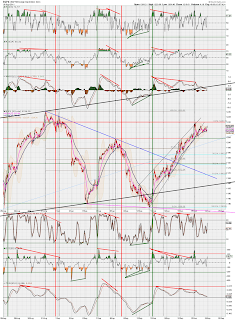 SPX Daily Chart - Watch all those arrows to the right of each indicator. Green = good, Blue = change of indecision and Red = bad. Not much red on here. STB is paying close attention to the interaction of the upcoming 50dma's. Of course none of this matters. Only what happens with the Fed on Wednesday and with Greece matters. 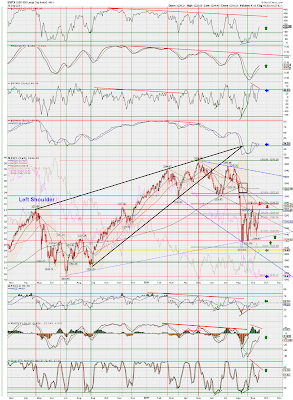 Housekeeping - I have NO CLUE what happened with the comments section this weekend. The Open Weekend post did stop accepting comments 48 hours after the post. I set this parameter as some unscrupulous types like to come in well after the fact and deposit unsavory links and suck in older posts. This has been moved to a three day limit.

As for the disappearing, flagged and ability not to post links I have no clue (maybe the Handler is really pissed with the resiliency of STB and its followers to adapt and strive). The comments section is set up with literally zero limitations. I almost changed comment provider yesterday, but stopped just short figuring you all will need advanced notice of this action should it occur.

Have a great week!