How bout that stealth debt ceiling increase last night? Holy shit. Welcome to the 15 trillion level and 100% debt to GDP - the end is near folks. I do believe they could fix this problem very easily, but it would cost us our military might. You just cut the defense budget in half and poof there will be plenty of money. Sorry - not willing to do that. Would much rather starve than be the small dog on this big rock.

Hell, even if they did that they would then expand the entitlement system till the system failed again. It is all so stupid. We got a bunch of lazy mofos/parasites that have been living off the host for too long. OK, HS science class - what happens when parasites overwhelm and wear out their welcome on their host? Host dies. that is where we are as a nation.

Quickly on 9/11 - STB has struggled with how to address this day. Apparently CNBS has as well as Kernan spoke into the moment of silence at the NYSE and then they went to commercial during it - how do you say it - classy. Let me offer my prayers and condolences for those who were harmed and lost their loves as a result of this horrific event. Without diving into the whole Loose Change (must watch if you have not seen it) conspiracy event that 9/11 (deservedly so) has become, I would like to ask the readers to simply take a look at one thing, building 7. Read, watch and study building 7. What was in building 7? You should read this first. Then look into the gold (yes, lots of gold) that is missing or made it out just before the attacks. Then ask yourself, how did the building that was hardly damaged just fall down into a perfect little pile (or "pulled" as Silverstein said)? I suggest you got the the site architects and engineers for 9/11 truth next and focus and study on just building 7. When you come away from there if you don't have any doubts or think it was not a conspiracy, fine. If you do, then start with Loose Change above to continue your journey.

How bout this stealth bullshit? Senate Attempt To Block Debt Ceiling Increase Fails: Debt Target Is Now $15.2 Trillion, Or Over 100% Of GDP from ZH last night blew my mind. We're so screwed.

The dollar (/DX) is above its 200dma for the first time since January. Should not stay there long. Not sure how you authorize an additional $500b to go over 100% debt/gdp and have your currency rally?

Minis will bust the wedge today, Should be down, but no guarantees there. STB has been patiently waiting for this top to confirm since the 15m post Wednesday near the close. We have to let the later time frames confirm. Some of you get caught up in the emotional side of the trade - you can't. It will not do what you want it to. This is a rigged POS market that is news driven and controlled by QE and the Fed. We should get some clarity today. 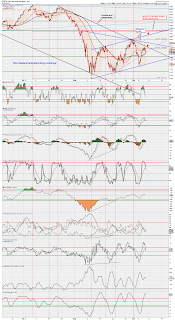 I'm gonna do a  little computer work early, but will be here all day watching closely. Minis are thru 1178 support and today has potential to get really nasty.