Very quickly on the debate tonight - does it really matter? IMO Obummer is the quick way to the end game and Romney is just a longer stroll to the same end. Bottom line is do you want to go down under a black or white man? I will not listen tonight or the next time cause spin, lies and cover ups are a total waste of my time. Discussing abortion and gay rights is not important at this time. Discussing the real issues that matter like the destruction of individual rights, the destruction of the Constitution, the banker takeover, special interest control of DC, real regulation, debt, the destruction of the US financial system, the ravaged economy, and a solid foreign policy should be the only things discussed but will barely be addressed.

Another reason I will not listen is that I literally can not stand to see or hear O speak. As an American he disturbs me more than I can put into words. (there is another tick mark for the handler to put on my record). Shock poll results have the race dead even. I laugh at those results every time I see them as I really can't understand why anyone would vote for either candidate. I really can't understand how O is even on the ballot. This country was founded by great men, apparently there are none left if this is all we can generate for our presidency.

IMF chief economist says crisis will last a decade - "The world economy will take at least 10 years to emerge from the financial crisis that began in 2008, the International Monetary Fund's Chief Economist Olivier Blanchard said in an interview published on Wednesday." A smidgeon of truth? Two words for the chief economist - Strauss-Kahn. You better have eyes in the back of your head my friend.

Pay close attention here. When the Rockefellers and Rothschilds start speaking we all need to listen. When the BIS speaks you better listen. European Banks Still Treat Their Sovereign Debt Holdings As Risk-Free, BIS Finds "Needless to say the reason why there is a loophole allowing European banks to keep such "assets" as Spanish and Greek bonds as risk-free, is because banks are doing precisely that. In doing so, the banks are massively misrepresenting the true health (and we use the term loosely) of their balance sheets, taking credit for up to a majority of fictious capital (and in the Greek bonds' case: 95% or so of the original bonds) that just does not exist."

"In simple terms, virtually the entire equity buffer of the European financial system, or 90% to be exact, would be wiped out if instead of focusing on maxing out risk returns by unsustainable leverage, Europe’s banks were to actually seek to transform into viable, stable entities, in the process marking their massively mismarked asset base to market." And that my friend puts the EU financial situation in a nutshell.

New Model to Predict Unemployment Sees Rate at 8.1% Predict? What are we seeing into the future now? I'm not sure what their problem is with the current system, they seem to be able to generate whatever numbers they need from it? Hell, why have a system at all if you are not going to tell the truth anyway? "Mr. Nakarda, of the Federal Reserve, plan to start posting unemployment projections based on the new technique in the coming months. Until then, they provided Real Time Economics with a look at their forecast for Friday’s jobs report."

Apparently this thing kicks total ass and predicts all will be well in no time (pay no attention to the IMF chief economist), "also forecast a very gradual improvement in the months ahead: 8% in October and November, 7.9% in December, and an incremental drop to 7.1% over the course of the next year (although the authors caution in their paper that their projections become less accurate as they go further out in time)." WTF? This is so stupid I can not begin to express how stupid it is.

Daily SPX - cause you need to see a chart on a technical blog, I present this. does it really matter in a totally manipulated and controlled market? Actually it does, cause technicals never lie. As I say every day, I sit and wait on my catalyst. I have no clue how the market could not have topped at 1474, but these days you never know. I have not called a top and am still considering it. Minis 30m - blue to yellow with 1432 as key support. 1502 next resistance and 1400 as next support. Choppy trading and low volume resting on critical support - not a good scenario, but with the Fed' backstop there is probably no need to worry (till there is). 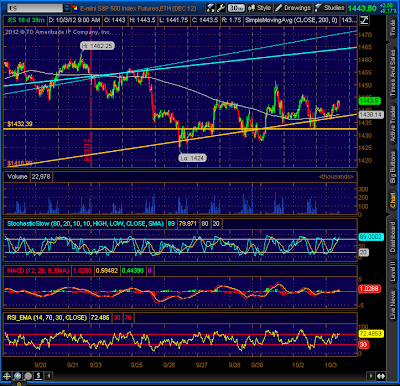