Right out of the pages of Hilsenrath, the drifting market needs a savior and after the QE3 announcement when there is no more hope to speculate on (which is what this market appears to like best) you get Greece. Really? Greece? Man this market is starved for anything that confirms the extend and pretend hopium trade will go till infinity.

Speaking of easing and well timed rumors, the Fed goes at it again today and tomorrow. The CNBS headline? Fed to Maintain Dovish Stance as Earnings Ruffle Markets, what did you expect? For the headline skimmers, that's just great news, but the second paragraph in the post has, "Those changes could include a new way of communicating their low rate policy, and what they will do when their Operation Twist ends in December." That's not the most doveish stance as I see it. Either way, things are uber super doveish right now as things have deteriorated to a point the Fed is having to run simultaneous easing policies (QE and Twist). We're in a recovery alright. Things are just friggin great.

Today we get Trump's bombshell tweet around noon which may or may not be interesting. The FOMC rumors will be flying as well. We get confirmation that just like the OBL war room lies we now have the Libya snafu confirmation where O's administration is placed squarely in the cross hairs of another lie to the people. Don't forget about voter fraud. We all know that Soros will be responsible for counting like 30% of the voted in Spain of all places. That's bad enough, but when you get Guilford Co. voters say ballot cast for Romney came up Obama on machine ahead of the election, this has the potential to become a very ugly election.

Daily SPX - Will someone please congratulate Potter on the last two days of sick saves? Yesterday I left out the whole 'follow the Fed' rap I usually deliver. Today and tomorrow the Fed speaks, so hold on a day or two more. I do think they have lost total control of everything but the markets at this point and their grip there is beginning to slip. Critical support here at 22 and looking for lower blue support if this fails. 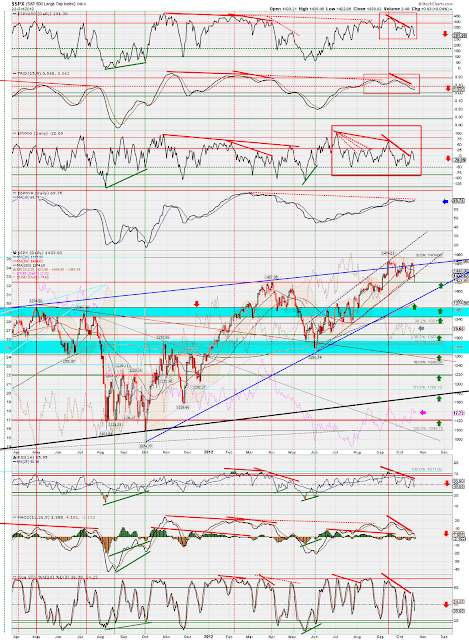 Minis 5m - Green diag (possibly HnS neckline) resistance backtest here with possible backtest of pink busted support just above near 1425 is what I am looking at right now. Big blue played his part in support yesterday on the number. 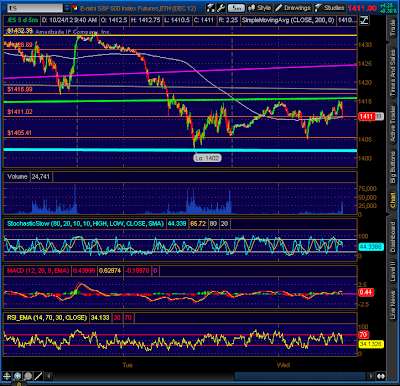 No telling what could happen today. You would have to assume they are gonna try and rumor this thing up again while the FOMC is on. We all know that FOMC rumor driven ramps are responsible for like 50% of the appreciation off the lows, so what would be new?