Let's face it, they are gonna ease no matter what, how, why, when, where, whatever. We've been saying it for almost a year now. Their backs are against the wall. They have no way out. They will print until the gates of hell open and we are all sucked down the tube to eternal damnation.

From Zero Hedge, "Gold and Silver and surging this morning as the Fed's Charles Evans talks on CNBC of the need for more accomodative policy by the Fed. His 'infiniter' easing seems to have sparked this move as he clarifies the seeming psychopathy of the Federal Reserve's actions. His message clearly is that the amount doesn't matter (nor the unintended consequences), the printing and flooding of money into an already stuffed banking system will continue until morale improves." Permadove Chuck Evans Speaks, Precious Metals Soar (emphasis mine)

CNBS comes close to admitting some truth in ECB's 'Nuclear Option' Better as Deterrent Than Weapon. As usual they tell half truths spinning the worst to make it all appear like life is some big joke and all will be well. I'm surprised they addressed this much truth at all. Speaking of Draghi's lies that prompted this ramp since June, "The word "unlimited" was meant to serve as a warning and signal resolve. It shouted "don't even think of betting against the central bank because we can overwhelm you." Market players used to the adage "never bet against the Fed" were supposed to hold the ECB in similar awe.

So, U.S. Stock Futures Advance as Concern Over Europe Eases. Really? Seriously? Sometimes I want to take the CB's bazooka and shove it up the MSM's backside.  What a crock of crud. So the market nearly collapses last week on the EU crumbling and come Monday morning all is well. Does someone care to tell me what's changed from Friday to make things all better? Spain is still burning as I recall and Days After Disclosing Its 2013 "Austerity" Budget, Spain Announces It Will Miss Revised 2012 Budget Target. So just like Greece or (insert your favorite PIIGS here) another budget target missed, but all is well.

Folks, if you don't get it the bottom line is we can not stop spending, period. Governments are incapable of going backwards. Too many rely of entitlement spending and politicians governments have promised more than they can deliver (thus you have a bunch of liars that promise more than they can deliver to stay in power). You can NOT SPEND MORE THAN YOU TAKE IN PERIOD!

Minis 30m - All is well - Overnight Sentiment Improves On Record Eurozone Unemployment, 14th Consecutive PMI Contraction. 1432 held. If that should go 1400 will be the target. Toll then is should consolidate between yellow 1432 and blue 1460. 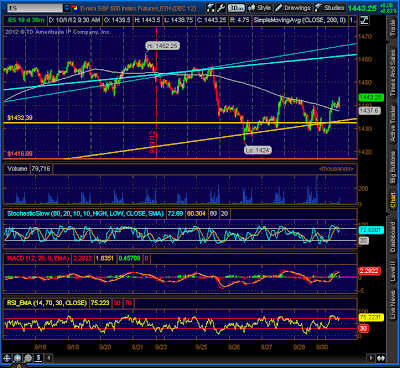