Halloween Eve! For some reason I'm not as jacked up about the spooky event as I usually am. Did anyone catch the moon last night and this morning? Perfect for the season. I'm sort of in the spirit, but not raging as usual. The good news is that on Thursday I can start watching Xmas videos. That is my official beginning of THE season which is always too short and seems to lose more reverence every year. Remember,  "What if Christmas, he thought, doesn't come from a store. What if Christmas, perhaps, means a little bit more." Much more of that to come on the next couple of months.

As for the markets it seems that Xmas is a year round event now that just keeps on delivering everyone's favorite gift, cold hard cash "nickles, nickles, nickles". Well, perhaps Japan is teaching us that too much of a good thing can become an issue. I suggest you read When ¥11 Trillion Is Not Enough: Japan's QE 9 Disappoints, Halflife Zero, Time For QE 10. "Japan just came up with a brand new New Normal concept: tightening through easing, when its ¥11 trillion intervention proved to be woefully insufficient for a market addicted to ever more liquidity injections." Did you catch the number following that QE? Like a bad movie series (Halloween?) that just keeps on going downhill.

To those in the US that don't think we're headed down the same path, you need to think again. Sadly, we'll never make it to the STB "Konichiwa Bitchez" point as the global economy and financial system will implode before we can get there. This will not stop them from trying though as easing is the new normal  Easing is the only savior left. Without easing, it all dies.

Being Halloween Eve I suggest you read Marines, police prep for mock zombie invasion as well. Lord knows why, but doesn't it seem the state wants to control everything that moves on this planet? "In the scenario, a VIP and his personal detail are trapped in a village, surrounded by zombies when a bomb explodes. The VIP is wounded and his team must move through the town while dodging bullets and shooting back at the invading zombies. At one point, some members of the team are bit by zombies and must be taken to a field medical facility for decontamination and treatment." Sure, we got the money for this. Now remind me of how many police and fire personnel were released over the past few years?

For those that thought I was totally nuts when in the OWP I went for the UFO disclosure to come soon tack, if you have not seen this (a very convincing UFO event) take a look. I think it is a portal of some sort. UFO Over Virgie, KY Oct. 16, 2012. I was not kidding when I said they will use disclosure as the ultimate trump card to mask the coming financial crisis. Remember Reagan? "if we were facing and alien threat from outside this world". That is not a drone and it is something unidentified floating over Kentucky.


As for the markets, closed again today. The futures did trade and were up just a bit with price taking out Red channel resistance as Big Blue tries to hold as major support here. 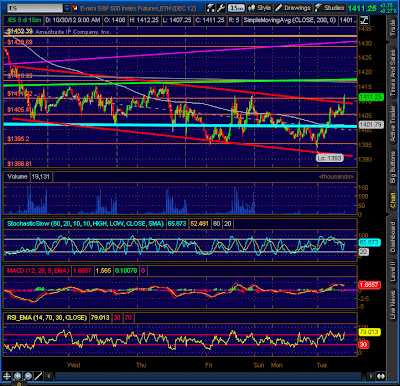 Looking for a spooky day tomorrow with pent up fears being released after the time out for Sandy.