Things are not good. Well, we know that, but today seems to be one of those days where the news flow is a tad more dire than normal. Of course this means Potter and his crew of fat thumbed flunkies will be riding high and omnipresent over the markets, so there is no need to fear if you are a bulltard. It is to bad they neutered Hilsenrath when they QE'd again. Boy would today would have been a perfect day to roll him out with another well timed rumor.

Jobs, not good - "What is however worse, is that it is becoming increasingly clear that nobody at the DOL knows what is actually going on, and numbers are simply picked out of thin air." Now, I could literally implode all over this report, but it is it really worth my time or yours to address what we all know is a total crock?

And how about those student loans? "The nation’s soaring student debt — which recently topped $1 trillion — has sparked debate over whether a college education is worth the price in the current job market. But the study noted that unemployment for young workers with only a high school education is more than twice the rate of their college-educated counterparts."

I've been writing about this for years now and the situation here is not good at all. The education system is failing which will eventually fail the nation. In a socialist welfare state, who needs an education anyway? In an entitlement driven world where you as more tenured, qualified and educated lose a job promotion to someone with little experience and a GED, why should we bother? Hell, they gonna give you a phone anyways.

Why not do what France is considering, "Homework favors the wealthy. This is the position that the increasingly imbecilic President of France is taking in proposing a ban on homework as part of a series of educational reforms. As ABC reports, Hollande sees "education as a priority" but work should be done during school hours rather than at home "in order to establish equal opportunities." "

Greece and Spain, not good - oh... really Shanky? Not good? Can we have something  fresh here and not this SSDD stuff? STB - No this is more of a comedic interlude, as the economists (Nobel prize winning or not) remain several years behind the curve and can't apparently see thing till it is clear in their rear view mirror (and even then they will dispute it). From the "no shit" post of the day Stiglitz comments - "Greece and Spain are in "depression, not recession", Nobel prize-winning economist Joseph Stiglitz said on Wednesday, blaming tough austerity measures for their downward economic spiral." 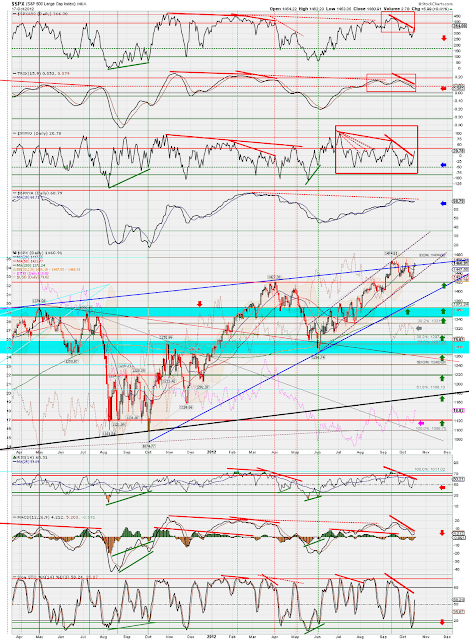 Minis 4hr - Yellow backtest complete. To this point I have not even remotely entertained the blue diagonal above. Way above, but it can not be discounted. Possible STB point at the intersection of upper pink resistance and yellow busted support near 1464 in a few days. Possible blue channel forming after the green rising wedge failed at resistance yesterday.

I know it, yeah, I broke down yesterday and added a few lines to the charts for the first time in weeks. Well, this ramping, formless POC finally made some sort of recognizable pattern. 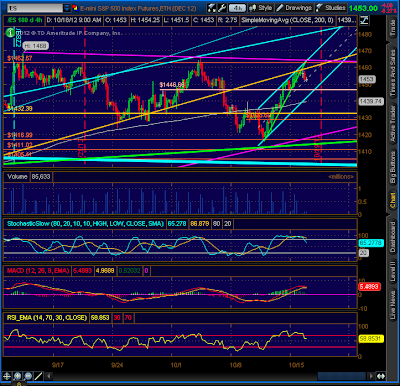 You know what to do.

More charts below if necessary. One thing for sure, my interest is coming back, so maybe the charts will start telling the truth again soon. They always do.