CBO CONFIRMS FOURTH CONSECUTIVE YEAR OF TRILLION-DOLLAR DEFICITS UNDER OBAMA. I did not all cap that post title, that is the way it came. If it wasn't I would have all cap'd it myself. It is a point that needs to be emphasized. "The Congressional Budget Office (CBO) reported on Friday that the budget deficit for 2012 was $1.1 trillion and was only $200 billion less than 2011's deficit because Oct.1, 2011 fell on a weekend."

What can we say about this audacity that we have not been addressing over the past three years here at STB? Absolutely nothing. Three years of bitching and moaning and truth telling have in a way gotten old. I'm tired of waking up day after day and reporting the same thing over and over and over for years. The outrageousness of it all is beyond comprehension.

To sit here day after day and watch our future be sold out from under us so the TBTF's can be glorified saved and the entitlement class can be exponentially expanded at the expense of current and future generations is horrifying. Watching a government out of control serving the special interests over their subjects the people who should control the overall situation is astounding.

Five Fun 'Pre-Earnings' Facts For The "Buy-The-F$$$ing-Dream"ers addresses the upcoming earnings season with a bit of skepticism. I have discussed this in recent months as part of the reason the Fed went ahead with QE3. Everything sucks and will continue to suck. An economy permanently on the Fed's tit is not the ideal situation. Real organic growth is nonexistent.

Note the downward revisions and negative pre-announcements in this post. Something I have addressed for years here is the earnings manipulation game supported by Bernanke's Backstop (cue my INTC speech I give every quarter). They downwardly do anything and what is the consequence? None at all cause of the backstop. The Fed's tide lifts all ships listing or not. What is the result? They revise down, stock price is not disturbed at all, the hurdle is lowered and when earnings time comes the get a easy beat. All the while no one ever bothers to remember or mention the revision or lowered hurdle, all they see is the beat.

In the meantime the government continues to manipulate every data point. What a great country we live in! Please understand the the Government has bought 13 times more ammo this year (1.6 billion rounds for DOMESTIC USE) than in any year in the past. They are planning for martial law. Yes, things are just great and this 'recovery' is swimming along just fine. Might I suggest you watch State Run Religion and FEMA Prepares for “Mass Fatalities”.

Daily SPX - Last week I began to point to the divergences. They are pretty nasty and need to be respected regardless of the Fed's backstop and Potter's wand. Maybe they have moved markets to a point where they can let some air out and not be afraid of losing all control. That said, I'm not sure the bots (machines that control all trading and market liquidity) are capable of managing a downward slide and any move south must scare the shit out of the powers that be. If the bots get going the wrong way it would be a disastrous situation (for the elite not the normal person).

Minis 60m - I've been telling you yellow to blue for weeks and Friday we got close to upper blue resistance coming within three points of a new high. That set a pretty double top in conjunction with the daily divergences. I really wanted to see a slightly higher high there. Right now it looks like 1442 would be the first support then 1432 than 1400. 1502 is the next big resistance. 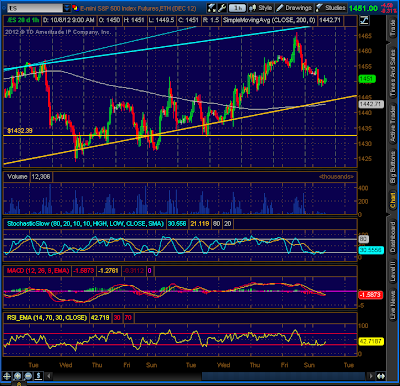