Not much to say this morning. It is a bit distressing when staring down a rather disappointing earnings season with our debt load and economic issues all the while the stock market is making a triple top at multi-year highs like there are no consequences for anything. Mind blowing stuff this central planning socialist stuff.

I suggest you take a gander at Guest Post: Should Central Banks Cancel Government Debt? "Of course the proposal was not really meant to be taken serious: rather, it was meant to highlight the absurdities of the modern-day monetary system. Paul himself pointed out in subsequent interviews that the proposal would naturally never be adopted. In short, it was essentially an educational foray on his part -  he wanted to encourage people to think. " Think? Really? I thought that was one of the recent additions to the terrorist profiling list? Joke or not, I believe some form of forgiveness will come in the future as the central planners further box themselves into a fiscal corner.

Daily SPX - The triple top with underlying weakness in all its glory. Yes, Potter and the Bernank see this as well. Like Otter from Animal House, bloated overbought and drunk is no way to go thru life. Reality will bite one day. Till then all you can do is watch the train wreck in slow motion.

Minis 15m - There was a rising wedge, I changed that to a possible channel (blue) yesterday. Price sits at that support just above 1446 and 44 support area. Watch that 44 area for further clues. If that goes back to 32 she goes. That top at 59 yesterday was really weal and the backtest of the busted yellow support diagonal was right on the money. 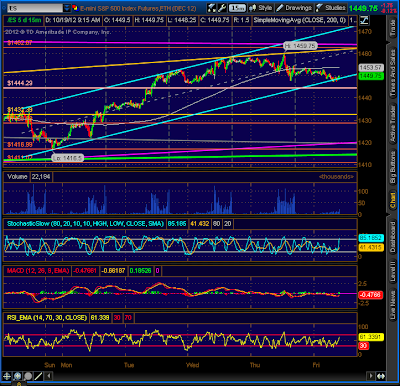 I remain bearish here but must caution against the impossible (which becomes possible more often than not). I wait on a catalyst.

As usual, more detailed info below as the day goes by.