You gotta look forward to the banks reporting earnings each quarter these days. Kinda like a Monty Python skit. Where with MP the brilliance lies in the coy and smug humor, the humor brilliance in the bank's earnings lies in the creative and original methods they come up with each quarter to make seemingly impossible beats over and over again against all odds. "Just how JPM can justify such a major contribution to earnings coming from loan losses when NPLs have soared is unclear to anyone with a frontal lobe." is how TD at Zero Hedge puts it. I guess it is the season for black magic, and you should expect more from the remaining banks this (and next and next ...) earnings season.

When they changed the accounting rules in 2008 the government opened the door to all sorts of earnings shenanigans, and they rushed right thru. Do 20% Of Firms Cheat On Earnings? managed to scratch the surface of reality. "To wit, Bloomberg notes a recent paper (below) that finds 20% of CFOs will "manage earnings to misrepresent economic performance" with 93.5% admitting it is to influence the stock price. 'Red flag's include EPS inconsistent with cash-flows, unusual accruals, or an industry outlier. Amid pressure to maintain stock prices (and keep a career going), 60% of earnings 'management' is to increase income and of course 66% of CFOs hope for fewer accounting rules going forward." Note that "fewer accounting rules" part. I discuss this virtually every earnings season. And some wonder why at earnings season I cocoon on calling the markets.

When CNBS starts printing posts like Why Jobless Claims May Not Be as Good as Market Thinks then things must be starting to crumble. When the establishment's major financial mouthpiece is allowed to even address such a topic, you know someone at the top is losing a bit of control.

So what data can you trust these days? I may sound like a broken record spewing conspiracy FACT theory day after day here at STB. Some dismiss my thoughts and beliefs as fringe and extreme, but when theory becomes fact over and over again those that doubt start to come around. Maybe even the government is getting fed up with its own self manipulation of the data? Issa Wants Congressional Hearing On BLS 'Data' point out, "the way it's being done with the constant revisions, significant revision, tells us that it's not as an exact a science as it needs to be and there's got to be a better way to get those numbers or don't put them out if they're going to be wrong by as much as half a point." Now both you and I know that is a more than kind description of the problem. With ZH I expect nothing more than a few headlines and veiled attacks on the real issue, cause both you and I know if they were to get to the real numbers the truth would be unbearable.

Daily SPX - Little has changed over the past few weeks after the QE3/Draghi ramp top. No selling of the news just yet, and the markets appear to remain contentious and at best. Potter and the PPT are doing their best to retain these levels, and I suspect they will at least till the election. 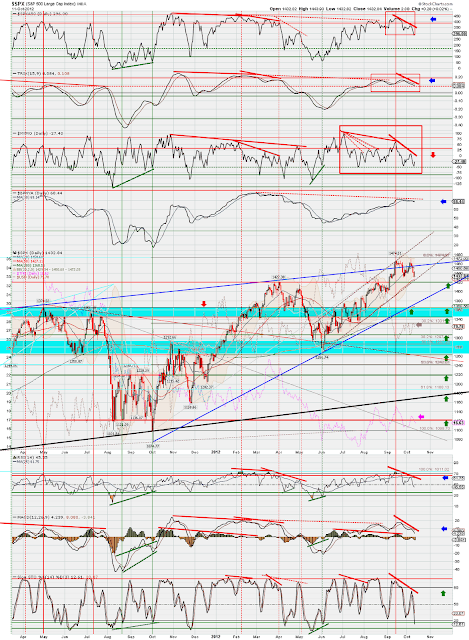 Minis 30m - Yellow to blue folks. Been saying it for weeks. They gave us a great head fake the other day dipping below 1432 all the way down to 21. Now the question becomes is this just a backtest of 1432 and is there more weakness to come or is this the beginning of another improbable move up? I think the markets rampiness in done with for now and about the only thing (newsworthy - excluding all standard manipulation tactics) left that could cause any sort of significant move up would be a resounding Romney win. Support is 1410 then 1400 and resistance starts around 1448. I'm voting weaker at this time over strength. 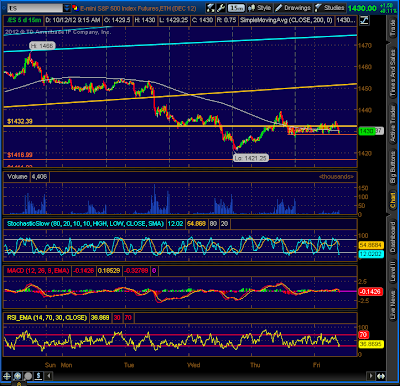 Have a good weekend and thanks for another great week on the blog! You folks are terrific.