David Einhorn Explains How Ben Bernanke Is Destroying America is a wonderful  must read post for each of you over on ZH. Hang in there, we'll get to the AAPL debacle later, this stuff is far more important. What you need to be concerned with is how the Fed is destroying America.

Most here realize the death spiral we're in. Most here know that we traverse the financial cliff of the abyss every waking moment and remain one slip from a Baumgartner to the fiery pits of hell. Without easing to save the banks we would have entered the inferno back in 2009. Since then nothing has improved and the global economic and financial systems have become more reliant on the Fed's tit than ever.

"Apparently, anything less than a $40 billion per month subscription order for MBS is now considered ‘tightening’. He’s (Bernanke) letting us know that what once looked like a purchasing spree of unimaginable proportions is now just the monthly budget." They have created a monster. Like a typical American spoiled, sugar and red dye jacked up, unruly, adderall junkie child markets expect their morning and evening dose of stimulus "or else" so does the market. It is truly an addicted state where the addict must have his fix or all hell will break loose.

We always have the Fed and the government to rely on right? Sadly this is wrong as well. No matter what, in order to protect their power, no matter the cost to the country, they will spin the BS from the BLS and use the controlled state media (the MSM) to paint whatever picture they want you to see, real or not. Heck read this BS that was just released this morning, Q3 GDP Estimate Beats Expectations As Government "Consumption" Soars. "Sure enough, the preliminary look at Q3 GDP just came out and "beat" expectations of a 1.8% print, with a 2.0% reading (or just in line with stall speed, a number which previously has been indicative of recessions). So far so good, but as with every other pre-election economic data point out of the government, one has to look behind the headline to get the true picture. And the details are, as expected, ugly." Read that post. What a joke our system has become!

What has to happen to break this cycle? Well, over the past year STB has addressed Germany as the key player in the EU's survival game. Well, as noted, Germany's continued unwillingness to go along with the global cabal's 'bailout at any cost' Keynesian meme is starting to unravel the plans of the banking elite. "Recall that this was precisely the dilemma before the Bundesbank as we explained yesterday, when it did what it had full right to do openly, yet did secretly, when it pulled its gold inventory from London: it implicitly confirmed it was no longer a willing participant of the NWO, and no longer is willing to sacrifice its sovereign independence at the altar of Keynesianism, and monetary theory." (and don't let that brief mention of the NWO go unnoticed).

This my friends is the type of external or 'exogenous' event I have called for since the beginning of the blog that can finally end this nightmare. Most long term readers know that over three years ago when I started STB I had some crazy notions about the financial crisis. Sadly, most have come true and the few that are left appear to remain right on track (except for my massive deflation to hyperinflation call which still has a chance). My main long term call was that it would take an external event to rip control from the Fed to end this financial farce.
Most here know I love it when the experts come to where I have been for years in my theories, start to discuss my long or near term targets and use terminology I have been on for years now. "Sooner or later, we will enter another recession. It could come from normal cyclicality, or it could come from an exogenous shock. Either way, when it comes, it is very likely we will enter it prior to the Fed having ‘normalized’ monetary policy, and we’ll have a large fiscal deficit to boot." I like that 'exogenous shock' part.

So, is Germany my exogenous event catalyst? I think it could be. It appears that the Bundesbank is not willing to go all Wiemar again, and may be the only financial institution that is willing to actually learn from history. Germany appears to be the only group with any sort of clue as to what reality really is. They get it that throwing good money after bad (see Greece deadline Sunday evening) is not a good idea. I suggest we all follow Germany's lead here, cause when they finally cut bait, it will be the end of this Keynesian nightmare.

As for AAPL, look at it this way, no one is going to sell, cause when that floodgate opens everything goes. Literally everyone owns AAPL on massive leverage. When this trick fails, the boom from the implosion will be heard galaxies away. The last bastion of iEverything dominating discretionary consumer spending addiction is all there is left of the capitalist model. Thus the question must be asked, has saturation finally been achieved and is the cycle topping? I believe it is and the fairy tale is coming to an end. As for last night's price action after the miss, only one way to describe it, Potteriffic! 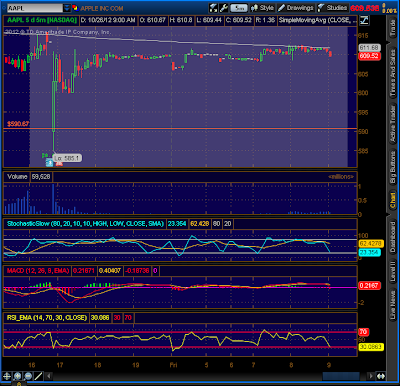 AAPL long term - if this overbought overthrow is not clear to you then you need to have your head examined. See that gap (gray rectangle) around $430? HA! and that just gets AAPL back into the LT wedge that targets that lower blue diagonal near $300. Yes, that is coming folks, if not worse. It is only a matter of time now. And some thought is would never happen to MSFT either. Heck, at least MSFT drives everything we touch. AAPL is basically a toy. 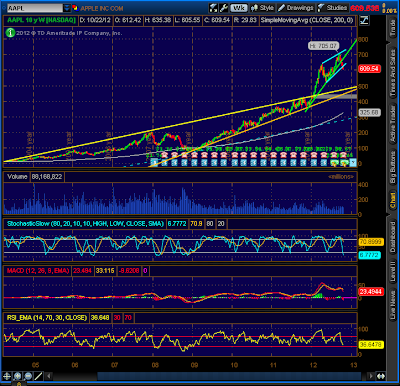 Minis 60m - This chart says a bounce will happen off round level support. Big Blue has barely held for now and a retracement or backtest of green (HnS neckline target 1330) near 1417 or pink wedge support near 1430 are possible. If 00 goes, 1374 will be the next stop and is where all the sell triggers lie I am guessing. 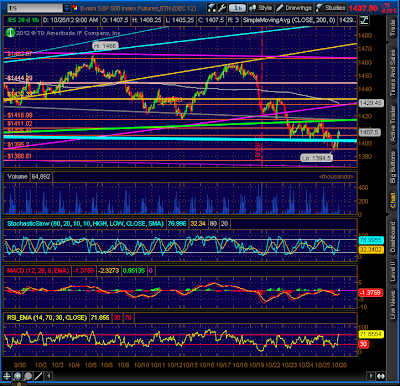 Things look really dire right here. If you saw all the SPX charts I put up yesterday you should agree. I really don't think they can support the farce much longer and if they cut Greece loose Sunday, a 12 handle will be in order much sooner than later.

As for the other charts, see yesterday's post and look below for timely updates on the minis.

Have a good weekend and thanks for your continued support of STB.