The joke du jour for STB is Moody's Slaps ESM With Negative Outlook On Day Of Its Official Launch. Yes, even out of the gates the newest and brightest bailout package is presumably doomed from the start by one of the ratings agencies. How is it that the crooked and on the take rating agencies can go against the establishment? I have no clue. Maybe someone at Moody's found Jesus in a closet or something. Well, Judas maybe, their AAA with negative outlook is still a complete farce, but at least they are willing to shed a bit of light on reality.

Staying with the farce theme today, for those that don't believe that the markets are rigged and that liquidity is at best a ghost - "A single mysterious computer program that placed orders — and then subsequently canceled them — made up 4 percent of all quote traffic in the U.S. stock market last week, according to the top tracker of high-frequency trading activity. The motive of the algorithm is still unclear." Now regular STB readers know all too well about this action and this news is no surprise to them, but for new readers, you need to know that this has been happening for years and is really just old news.

Let's not let the biggest farce of all die just yet. Langone Takes Welch's Side: Jobs Numbers 'Don't Square' I can't believe CNBS posted this. They must be flush with bailout cash right now and are trying to place bets on both sides of the table to get in good with the next administration. "Later in the Langone interview, real estate magnate Donald Trump also took up Welch's side, saying, "He's 100 percent correct. There wasn't an economist in the country who said it could possibly happen. By the way, after the election they'll do a big correction.""

And to the farce that is potus, let's throw some more fuel on the fire. BOMBSHELL: OBAMA.COM OWNED BY BUNDLER IN SHANGHAI WITH BUSINESS TIES TO CHINESE GOVERNMENT. Now this is little different than what his campaign did in '08. The only difference now is that he has a chance of losing and not 100% chance of winning. Maybe this time someone will actually get prosecuted and not just have the problem shoved in some deep dark closet. You need to know that there are laws that are designed to stop foreign influence in these campaigns. This issue takes "bought and paid for" to a whole new level in DC.

"The unusual Obama.com website redirects traffic directly to a donation page on the Obama campaign’s official website, my.barackobama.com, which does not require donors to enter their credit card security code (known as the CVV code), thereby increasing the likelihood of foreign or fraudulent donations."

How shady is this whole fiasco and how much political control does China have over potus? "In 2011, Mr. Roche obtained one of the most sought-after pieces of real estate in Washington, DC: a seat at the head table for President Obama’s State Dinner for Chinese President Hu Jintao. How Roche—a man whose infomercial company hawks fitness equipment, cell phones, and breast enhancement products—landed a seat alongside Secretary of State Hillary Clinton, former President Bill Clinton, Sen. John Kerry, former President Jimmy Carter, and Chinese President Hu Jintao remains unclear. "

Would it surprise you to find out that almost half of the campaigns for office in DC use this loophole? "The GAI report found that almost half (47.3%) of all members of Congress have campaign donation pages that lack anti-fraud credit card security, leaving them vulnerable to foreign and fraudulent online donations. President Barack Obama’s campaign website lacks such systems, while Governor Mitt Romney’s website has them." I highly suggest you visit Breitbart.comhttp://www.breitbart.com/ to get the whole story.

OK, that's enough of that crap for today. I could go on and on, but it would just make both you and I sick to our stomachs (worse than we already are).

Daily SPX - I finally got in to update this chart. It does  nice job at showing the divergences I have been talking about for a week now. That NYMO is in uncharted territory as far as weakness goes. Blue wedge should be in the final overthrow and THE top is in the process of being set. 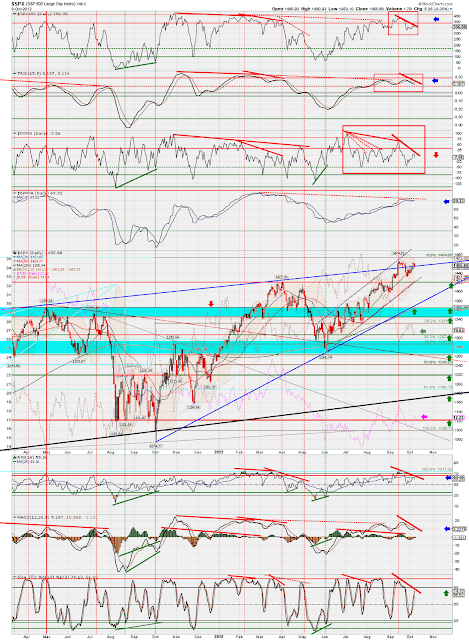 Minis 1m - If you were ever doubting my yellow support diagonal the low this morning should reiterate its correctness. 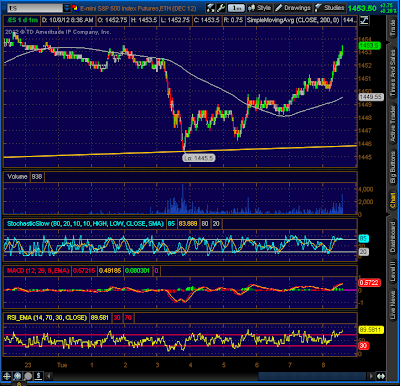 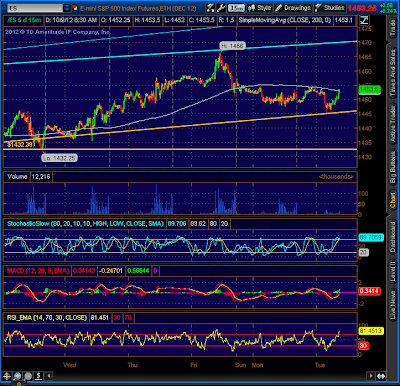 I sit and wait for a catalyst. Follow the Fed. Scalp long or short and get the freak out. Be patient with the market. Let it come to you (it will). Prepare for the worst to come.