Remember good is good and bad is better. Right now we're dealing with both. The unexplainable continues as, "Perhaps the most notable event in the quiet trading session so far has been the surge in 10 year Greek debt whose yield has tumbled to post-restructuring lows". Seriously? What sort of guarantees can be possibly provided that would ensure safety in any sort of investment in Greek debt? The desperation of the investment banks and the tsunami of money that flows from hot spot to hot spot searching for the quickest gains possible is absolutely astounding and most likely unprecedented in historical perspectives. This is not your father's market folks.

Outside of manipulated earnings that will hold their own till AAPL reports, the main thing to focus on today (as funny as this may sound) are the technicals. The charts are actually pertinent again. The charts have been literally meaningless or pointless since the Draghi ramp and my call on the minute for unprecedented market manipulation on August 02.

What's changed is the technicals finally caught up to team manipulation with the double top back on October 5th. Instead of looking at a major resistance point we're now looking at our first major support event. The Daily SPX chart is at a multiple support point where the lower BB, the 50dma and two support diagonals are in play at this moment.

All last week I pointed to the possible STB point on the minis chart where pink and green support diagonals crossed at 1413. I did not get to that point, but a fall to 1416 just above that point is close enough. There are wads of support from 1400 to 1413 on the minis, so this coincides with the cash charts support issues. When the yellow support diagonal and 1432 on the minis cracked last week that marked the first momentum for the bears in months. Now the bears face their first major test. 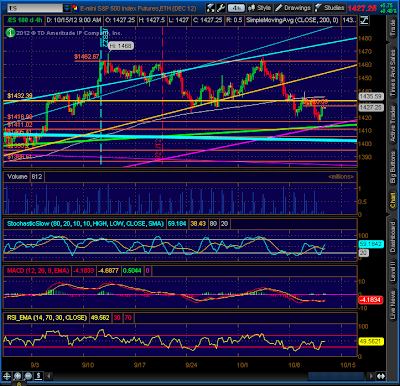 Back to another Daily SPX chart. Most know that I believe that market levels above 1374 are in a atmosphere that lacks the necessary oxygen for anything to survive. If this point fails, I believe THE top is finally set and the new bear market will have begun (QE or not). The chart below depicts a major top formation which would (normally) yield at a minimum 5 to 10 percent correction. The three major support areas below here are major blue rising wedge diagonal support, the 200 dma lies just below 1374 and the 38% retracement near 1338 (which in some sort of normal market would be the target for this move). The problem with that is the bust of blue wedge support. In that case, we have a major breakdown and much worse would (normally) be in order. 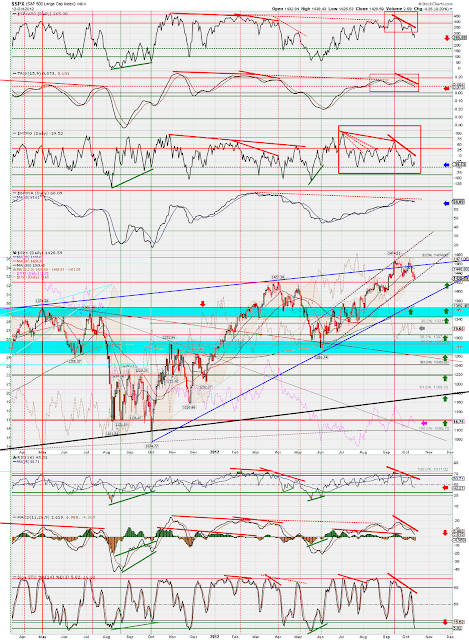 So here we sit on the cusp of a major technical breakdown. If you and I see this we both know that the Fed sees it as well. We all know the Bernank does not want the current dictator 'n chief out cause he'll be out of a job. After all, we're in a recovery! Another question is can the markets fail in the face of the QE/TARP combo? Probably not.

As usual I suggest you follow the Fed, scalp and run long or short, remain patient, let trades come to you and wait for a catalyst that finally removes the armor from the manipulators leading to my "event" where the bears can invade and have real success.