I think everything I wanted to say this morning can be found concisely put in The Bump In The Night. "Then the money requested by Cyprus will be nowhere what is needed if Greece returns to the Drachma as the Cypriot economy, already banged by the Greek Public Sector Involvement, will be forced to its knees as the tragedy plays itself out in Greece. Then we have the “Big Bang,” which is Spain, whom Germany contends does not need any money, which is about an accurate a statement as Wichita, Kansas can be found in Bulgaria. Spain is reeling; calls for secession, banks that are insolvent and held together by paperclips and scotch tape, regional debt that is fifty percent of the country’s total and now the downgrade by S&P with one by Moodys placing them into junk and out of the major European Indexes which can be expected shortly. “Dead man walking” would be the accurate phrase. I will tell you; when there is no place left to run and no place left to hide then it is “tag and you are it” and Europe is now days away from getting tagged."

Got that? Now I am not sure about the 'days' part, but I totally agree we're very close to the end. STB's first quarter of 2013 call that I've been on for well over a year now looks to be spot on. The reason I don't agree, as all know, is that the BIS and the central bankers of the globe may not be quite ready for the "event" to happen. I think the US has to have the next potus in place first. So they continue data manipulation and using the MSM to keep the sheeple off track till they go nuclear on us all.

Earnings season will continue to confound the bears as yet another distraction and distortion of reality is promulgated on the investing public keeping the bulltards in risk on mode.

Daily SPX - This chart may be getting old to look at, but it is the chart to see. Blue wedge overthrow and nasty negative divergences in conjunction with other major time frames and moving averages are screaming yet again that this blow off top is about to pop. 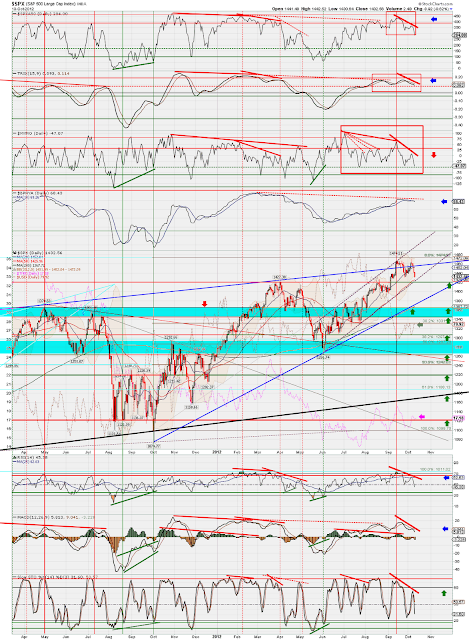 SPX Weekly - The indicators are quickly running away (in the wrong direction if you are a bulltard) from price. Overbought conditions have been met across the board. MACD divergence is a huge tell as well as a few of the others that exist.

Minis 4hr - Still looking at the possible STB point where green and pink meet at 1410 today. Backtesting 1432 s/r area here and a possible failure today is a real possibility. I was surprised when Potter did not intervene at 32 yesterday, but maybe they are allowing the shorts to get their hopes up before they attempt another squeeze again? 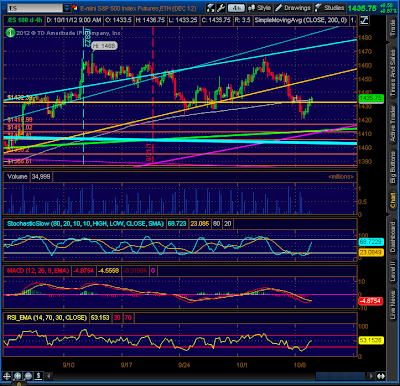 Earnings season is a massive crap shoot and most long term readers know that I hate making definitive calls during this time. Markets and sentiment can turn on a dime. It can also remain rather neutral as the meaningless fodder is waded thru till we get to the banks and AAPL which are all that seem to matter now. Keep on scalping long and short. Guard those trades and allow the big move to come to you. I still contend we'll all see it when it happens.