Just a quick reminder of what I believe is one of the major issues of the day and a primary reason they are fighting so hard to save the markets (even at these lofty levels) - "The largest 100 public pension funds have around $1.2 trillion of unfunded liabilities, about $300 billion above the nearly $900 billion they reported themselves, according to a new actuarial study to be released on Monday." That is from Reuters' Exclusive: Study shows $1.2 trillion gap for public pensions.

Do you remember when a billion was a big deal just a few short years ago? Now we toss out trillion like it is some common thing. STB has harped and warned for years now that this is one of the biggest and least talked about issues around. STB holds the unquivering belief that all retirement plans will be confiscated by the government before this nightmare ends. Some may remember Afternoon Delight 03/28/12 - Your Retirement Funds Will Be Confiscated Eventually.

It is not hard to find where the senate and congress HAVE DISCUSSED the confiscation of retirement plan assets and placing them into a single government managed account where to "whole" can benefit and the government can control all distributions.

I pitty the fool that does not believe that this could be possible. If you think a financial collapse is bad, then just how bad is it going to be when the SPX hits sub 500 and every pension plan on the planet goes kaput? "AFTER years of poor investment returns, the pension funds of the United States’ largest companies are further behind than they have ever been." And that is with this BS QE run and the SPX within 200 points of an all time high!

Folks, all I can say is that after the O-MFG and PFG events, they have set the table for confiscation of not only all retirement assets, but of EVERY asset period. Too far fetched for your taste? Well I guess a totally unregulated financial system that is allowed to commit any crime in the name of saving the system was too far fetched at one time. I guess QE to infinity and destroying the world's reserve currency was too far fetched at one time. I guess HFR/algo bot front running so the banks can make billions was as well. How about the NDAA and indefinite detention and drones and the DHS purchasing over 1.6 billion hollow points for DOMESTIC USE was too far fetched as well.

Wake up folks. Take your friggin head out of the sand and WTF! Reality bites these days and nothing will get better will we make it so. till then an out of control government will continue to let special interest groups and corporations run all over us.

SPX Daily - We discussed the major support point yesterday and guess what happened? Surprised that the Fed defended that technical breakdown? If so, don't be. That was pretty much elementary BTFD stuff you should be accustomed to these days. Nothing happens to the southside without a catalyst which will lead to my "event". Thus, as I say every day, I wait on the catalyst.

Now the question becomes, just where does this bounce off support take us? Lord knows that whatever height the Fed and Treasury want are the answer to that question. How much are they willing to continue to buy this thing up extending and pretending using the market as the primary illusion for the "we're in a recovery and all is well" theme? The bearish daily set up should produce a 5 to 10% correction under normal circumstances off the last top. I am still leaning with that occurring but with great caution (or skepticism these days).

I personally do not think they can push it much higher  I have not called a top yet. I believe they can maintain these levels without a downside catalyst possibly thru the election and into Christmas. Clarifying that, I think we may remain range bound say above 1375 thru the end of the year if nothing else happens. 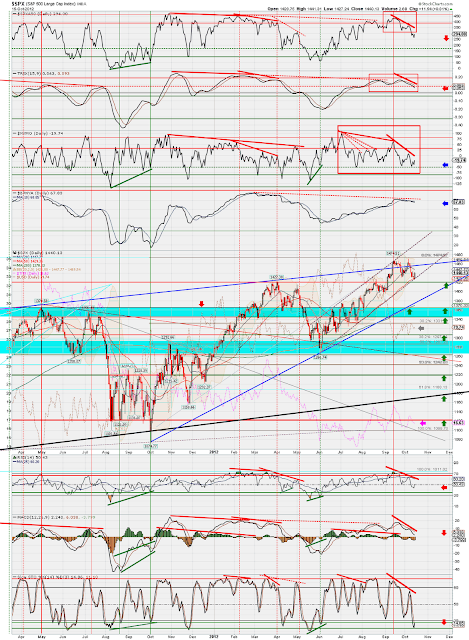 Minis 30m - Blue to yellow with 1432 support, for weeks I have been saying that. Then 32 busted and I gave the STB point at 1413 which came darn close. Now we're talking bounce off support. Back thru 1432 dusting the first resistance with what appears to be clear sailing to the upper 50's till she gets back to the yellow diagonal. That said, I would also not be surprised to see price remain around the 1432 area if the bulls can not maintain momo. 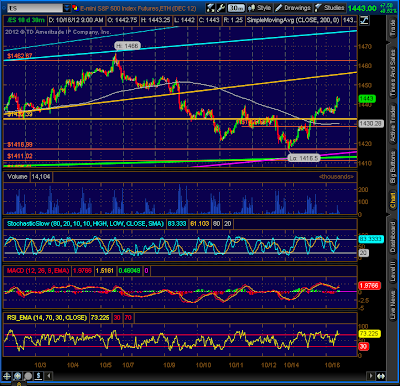 Follow the Fed.  Scalp and run long or short. Wait for the catalyst and the big one to come to you. Do not force anything or believe that something has to happen. It will in its own time, I promise, but till then be smart, guard those trades and don't trust anything.