It will be interesting to see if Obummer can maintain his stranglehold on the MSM, and if some begin to splinter from the oppressive regime now that their dictator in chief has taken a few blows. What if the constantly ridiculed and brow beaten media that is so afraid of this administration finally grows a set of balls and turns on the person in the oval office?

Once it becomes clear that O may not have a chance of maintaining the white house, the floodgates holding back reporters form releasing years of truth and deep held emotions may be released. Boy would that be interesting. Seriously, what if the white house and other reporters no longer had their stories reviewed and edited by the white house before they were released? What if the truth were allowed to be told to the American public?

I suspect you will see a windfall of donations for MR from those that were leaning to the O camp. I have speculated MR will win in a landslide, but with Soros counting the votes in Spain nothing is a sure bet with this election.

potus was lost last night. Apparently when bullshit no longer works, you can't lie thru your teeth about everything, they turn off the teleprompter and you have to stand up to your own record things become a bit more difficult. "What exactly was Mr. Obama’s strategy here? Did he figure with so many people unemployed in this abomination of an economy he should go for the sympathy vote? Like voters could relate to a guy who is just scared pantsless that he is about to lose his job?" HURT: Obama the debater: Making Jimmy Carter look awesome.

Another, "Obama looked tired, even bored; he kept looking down; he had no crisp statements of passion or argument; he wasn't there. He was entirely defensive, which may have been the strategy. But it was the wrong strategy. At the wrong moment." The Daily Beast

So O is the most powerful man on the planet? The leader of America? Friggin act that way then even if you don't feel it. You have faked everything else, why can't you fake that? Leader or loser is my question? Do you have any questions now as to why our foreign policy is down the tubes? Bowing to other foreign leaders and such does not cut it. Grow a set, be a man and stand there with your chest stuck out like you are THE man not some whimpering sympathy driven sissy!

Thank you Mr. Romney for exposing the fraud O is, throwing him under the buss and dragging him a few miles was good. I'd have preferred a lot more punishment personally for the man who single handedly did nothing other than work to install a socialist government when the nation was needing a leader the most, but this will have to do for now.

Yes, I despise Obummer. You may like him, but I don't. He is not nor has he ever been the man for the job. MR is no better (every president for the most part since JFK has been a fake IMHO). RP is the only man that should be leading this nation right now. Sadly the political system is failing us all no matter what they want you to believe. Both are lying when it comes to basically everything that comes out of their mouths.

We have too many people, not enough jobs and debt that is well beyond unsustainable ($16 trillion) not to mention the unfunded liabilities ($120 trillion). Our job in the global economy is to consume and the great consumer is dead. Not till we start bringing jobs back to this country will we ever succeed again. Screw China. If they can't get their shit together it is not our duty to ship our jobs over there (O's jobs czar). The rest of this argument flows into a myriad of things discussed here in the past which for time's sake will not be ventured into now.

On to the markets - The markets don't care who wins the presidency, cause they are the puppet masters. The debates will be all rosy and full of BS promises that the sheeple will gleefully absorb. More spin and lies that times are tough but all will be well after the next latest and greatest plan is administered. If not, the Fed is the ultimate backstop and we can print our way to prosperity, so what does a president do anyway?

I sit and wait on a catalyst, Spain literally burns, the EU is listing ever more, Greece is a lie, the Fed spends, Potter lifts, the MSM spins, the police state grows and add whatever other catalyst you would like to this long list of items that are set to implode the global financial system. Uh, things are bad.

Daily SPX - For what it is worth. 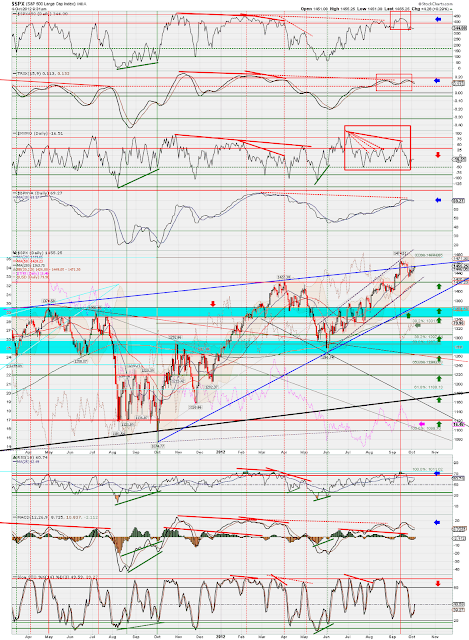 Minis 30m - As I have been saying 1432 and from blue to yellow diags. 1502 next resistance and 1400 next support. Scalp and run still applies and as always, follow the Fed. 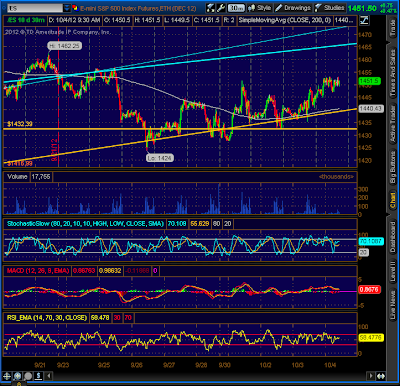 Note - I took it easy on O this morning, but expect my rhetoric against the current administration to increase going forward. This is a terrorist act, so reading this site could be dangerous. They are watching. We all know the handler is omnipresent here at STB.