Never mind the markets, they could go to zero now and that's still nothing compared to the end result of the crash in global freedom and liberty. The revelations from Fast and Furious to Benghazi to Libya and Egypt all prove governments are now starting to run over not only individuals but nations as well.

It is well known that the NSA knows everything and, legal or not, will use your data against you, fair or not, if it so chooses. We have no recourse and little power left to defend ourselves from the growing global police state. Since 9/11 and the Patriot Act their power has grown and ours has been taken one presidential directive at a time.

Obummer fans and apologists can blame this on Bush, father Bush to be exact. That's how far back the modern conspiracy state runs. In yet another case of conspiracy theory becoming fact, it was just admitted that in 1953 the CIA "helped" overthrow the government of Iran, and if you think their global political interference ended there you need to think again.

Fast forward to today where the DHS, NSA, IRS and numerous other alphabet stasi groups rule the USA with an iron fist and ask yourself what happened? How did this nation become more representative of Nazi Germany than the USA?

And what got me off on this tangent this morning? It is a combination of things that have been building for months and recent instances. I never really got my rant on when the Snowden/NSA event went down, and now that President Transparency, the Captain of Freedom, The Liberator, Nobel Peace Prize recipient, fresh off denying and belittling the IRS/NSA/AP/Benghazi fiascos is now asking the Supreme Court to allow warrant-less cell phone searches on top of the detention of David Miranda yesterday, well, if it's not crystal clear that you have no rights then you need psychiatric help.

And, oh by the way, the FACT that we're supporting/fighting WITH Al-Qaeda in Syria, well, enough said there.

I suggest you read Biting Our Tongues Doesn’t Keep Us Safe … It Only INCREASES Danger In the Long Run by WB. "Niemöller wrote a brilliant poem – First They Came – about the manner in which Germans allowed Nazi abuses by failing to protest the abuse of “others” … first gypsies, gays, communists, and Jews, then Catholics … and eventually everyone."

It's time to start speaking out. As I said, the markets can get obliterated and that will be immaterial to having our freedoms obliterated. You need to wake up now and get a clue.

The bond market, always first, has been telling us for close to a year this was coming. Markets are struggling with the taper on and bonds are starting to reflect reality as rates "normalize" (that's code/Fed speak for loss of control). Rising rates are the Achilles Heel of the "recovery" right now. Pandora's box has been opened and the real truth (as opposed to the propaganda BS they distort and spew forth) is being seen as rising rates begin to cripple everything financial and economically related.

In a little over a month, from the first warning of taper on, everything and most everyone is starting to run for cover. Remember Duck and Cover? Bert the Turtle warned what to do when you see that bright flash. Well, taper on is the flash that comes before the energy wave that's going to come through and wipe everything out.

Minis 4hr - The first target of the 50dma 1655 area was taken out. Now the HnS target in the 1645 area is being hit. The death cross on this 4hr chart is not a good omen. A move to just beyond the nearest 38% retracement and close to a 4% decline in price could be a point where this sell off may want a breather, but then again it may just be getting started. I've been speaking of price lacking form or recognizable patterns. When this happens, it is usually not a good thing. 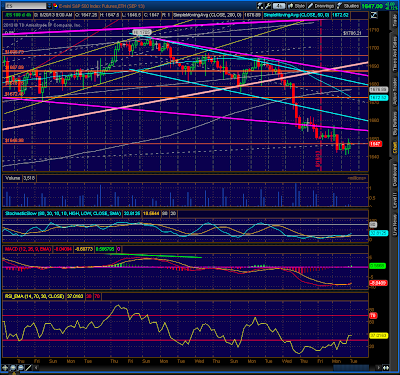 I saw a 1500 target this morning from one analyst. I think that is getting a bit far ahead of things at this point but is not out of the discussion. I do believe worse is to come as my theory that another round of fear induced blackmail (starting with TARP) is coming soon.

Minis Daily - The red support diagonal near 1610 may be the most important point, and there I believe they will definitely make a stand. IF that breaks the markets will have lost all support off the November '11 lows. Below that is the pink channel support and then the two yellow diagonals that defined the multi-year rising wedge that got us to this point. 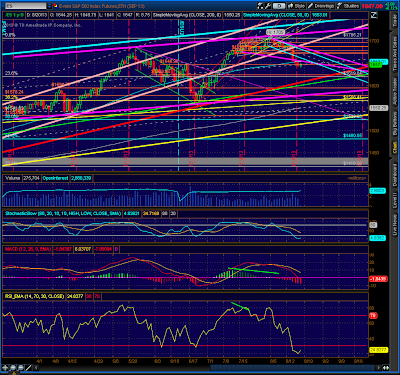 Let's see what happens near the 1600 round level before we start looking any further. I've been speaking of the tell tale volatility that surrounds major tops. This top may be set, but then again (remember LEH) the bulltards may have one last bull trap run left in them. Another thing to note is that when this thing does let go it will fall like never before, and the powers that be know this. They will let it go at some point, but only when they are ready.

If the 10yr remains in a free fall, we're just getting started. Remember CNBS told you weeks ago that the taper was priced in. They were so sure that all was well and that the taper would be market positive as the "recovery" was in full swing and taking the training wheels off was a good thing. Shuh, right.

More to come below. A shorter minis charts with closer targets will be below as well.


Have a good day,