Just cause no one has even brought it into the realm of possibility - How bout a no war and no taper super rally into Christmas?

OK, OK , LOL, I get it. Not funny. I'm just practicing my propaganda skills for the future. Anyway, the CNN propaganda machine is touting the possibility that taper will not happen this year and that gas prices and oil are about to get a lot cheaper. All is well. Just move along and let the government handle everything.

Here we sit again looking at markets that make little sense. At least gold finally has busted into a new bull phase (for now at least) and oil finally appears to be reacting to what it should have reacted to months ago. Are we finally entering the next stage of their game? The one where their massive spending efforts have failed and they must launch a war to cover up their economic failures. It's not like anything is wrong.

What can one say or blog at this point? Seriously, I gave up telling the same stories over and over again about a year ago. Like, they've kept the US debt frozen for 100 days just under the debt ceiling and nothings wrong here? Repeated data manipulation like BS from the BLS - like home prices rising this quarter in the same period rates have almost doubled. POMO lifting and zero regulation have run rampant and have finally run their course.

Other than things continually worsening (except for equities), nothing has changed for years, till now. They need a new game. This one is old and stale. So the peacetime consigliere Bernanke will give way to the rough and tough wartime adviser Summers. Big, like huge, change is coming to the USSA. The shift from concealed crime and destruction of the Constitution is about to become blatant and your face despot rule.


Minis 4hr - Not much to say about a formless falling/drifting market that you can't trust. I've been discussing this for a while now. My backtrace target of 1652 yielded all the way to 1666 but that resistance area held. The bears held and price fell out of the rising bear flag. My second target of the red critical support diagonal is looking better now. What was once a 1608 number has been raised (due to the rising diagonal) to just about match the 1622 support here. Getting there may not be much of an issue as there really is nothing to stop price between here and there. Below that are green and yellow support diagonals that become very critical if this thing starts falling as it deserves to. 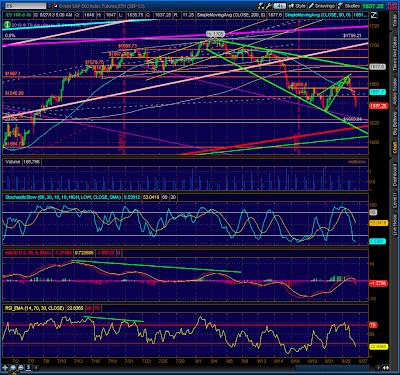 Technicals have done their job at this point. We were all pretty much ready for the turn once price surpassed 1700. Now it is just a matter of market forces overcoming blatant manipulation (or manipulators allowing a fall of some sort). All kidding aside, they may go for a quick burst at war, back off, taper off and try to get the best of both worlds here.

I don't think the rest of the globe will go for that though. They are pretty much tired of all our BS at his point. Hell, the citizens are tired of it as well. We're pretty much dealing with an elite class that think they are above every law and country on this planet, and that's not what out government is supposed to be. Sadly, there is not really anything that can stop them at this point other than the military turning on their masters.