Reminds me of the Jackson Hole from 2010 when they promised to ease later which bought them time (till November official announcement) to get free market lift. Coming off the first QE /off fall they needed to do something. Bernanke, still a rookie at this easing game, needed some time to get comfortable with just how fast his printing presses could run.

This easing stuff was expensive then, and he had figured out that being the last resort of liquidity gave him immense amounts of power over, well, everything. So, at Jackson Hole he basically promised to ease a few months later which allowed the Fed to go almost POMO free for a few months while the markets lifted knowing the Bernanke put was guaranteed to come.

This was back at a time the traders were still getting comfortable with QE and all this conspiracy stuff about markets being rigged and such. It was also a time when market calling was still somewhat meaningful as the markets were young in the transition from a random walk to being on a tight leash.

For the newer readers to STB, this was also the time of one of my best calls. Upon the Jackson Hole announcement in August STB called for a lift to November, a sell the news event on the announcement and then a screaming POMO driven market into Christmas and into the new year. Bingo! How was I able to call the market 4 to 6 months out with such accuracy? Follow the Fed, that is where my mantra began and I still follow it today.

However, today is a bit different. The rookie is now a retiring seasoned veteran. He's taken market manipulation from a theory and worked it to perfection. Hell, we're at a point now that even when GS screws up hundreds of millions of trades in the morning they get a free do over.

The changing of the guard at the Fed is not that big of a deal. Geitner? Does anyone really miss him or notice anything different without Turbo at the helm? Not really, and nor will they when helicopter Ben leaves. Just so the money keeps flowing is all that matters. A friggin monkey could runt his show. Just condition him to hit CTRL+P whenever he wants a banana.

So, as mentioned several times I think this taper ON is a fear tactic to be able to extend easing even at a time when everyone knows it will eventually destroy everything. It better be, cause the other scenario is not one we want to face quite yet although it will eventually come (global meltdown and wars everywhere). Remember the Paulson blackmail to get TARP. I think that's where we're headed IF this is not the end right here.

Remember, this is my best case scenario. No one is about to get in front of the greed train. They will fight for their system to survive like a mother lion for her cub, to the death. Well, death may be a better place to be other than the living hell we're all gonna face when this thing finally cracks or my "event" happens.

Follow the Fed folks if you choose to stay in this farce they call a market. You have no other option. If you choose to watch physical gold get more expensive and harder to find while supporting the banksters with your deposits that's up to you. They either kill it here with the Bernank stepping down or they get one last shot at easing. I promise you this, this will be their last shot, I don't think it lasts very long and when they have to come back to the table for moar and there is no moar left, that my friend is when they confiscate the retirement system.

Minis 4hr - is the 50dma now really resistance or are we just in stall mode waiting on the FOMC minutes and Jackson Hole? One thing is for sure is that global markets are not happy. We're about the only thing holding up right now. I guess its a damn good thing our markets are rigged better than all the rest.

Charts is busy and a bit hard to read, but I have to back it out to show the support (since there is none near price right now). I'm still leaning on my second target 1610 red diagonal support area at this time as the bogey. 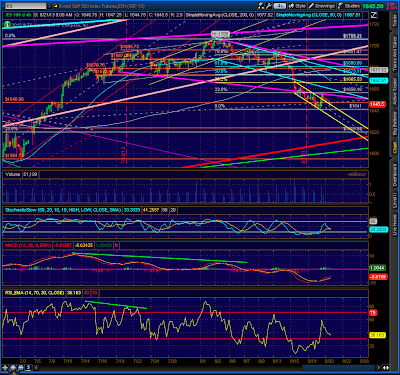