As I have been discussing the formless lost market for a couple of weeks now this post from ZH about the Markets Headless Chicken Dance sums up a good bit of the drivers of this massive conundrum. She's finding her way thru the darkness right now. Wandering, searching for direction. This is a great sign for the bears, while to the bulls it appears to be a temporary bump in the road.

Not much to do but wait and react right now. Syria appears to be going down no matter if the majority of the people around the globe despise and oppose the invasion. The budget crisis is coming, so that will be a new added distraction. The market's crashing as taper on reality spikes the bond markets and brings reality home. The NSA/IRS/DHS stazi state issues are burning bright. Is there not a better time to enter a war no one wants?

Daily SPX - Time for a bounce? Well, technically it could be, but geopolitical factors may have a say in that. From the top I've wanted to see the first taper on support diagonal tested. That has been as far as I was willing to go projecting this fall. The Taper ON support diagonal (blue) was my second target for this fall. I am more willing now to open up to the possibilities of more downside, much more in fact. SPXA50, NYMO and S Sto could be ready for reversal here. A few small positive divergences can be found, but as mentioned above something much larger than technical forces is driving this market now. 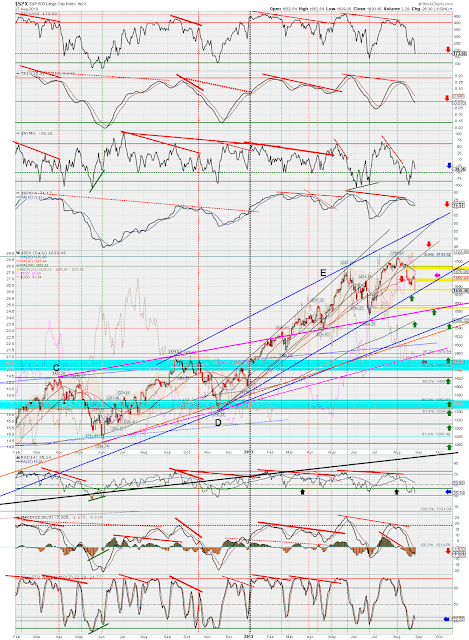 Minis 4hr - 1618 is red diagonal support. This is what I think they would really like to defend if possible. The 4 year bull run in the bear market will be over if they let this point go IMHO. If this point goes deep 15 handle figures will come into play and possibly some with a 14 handle. 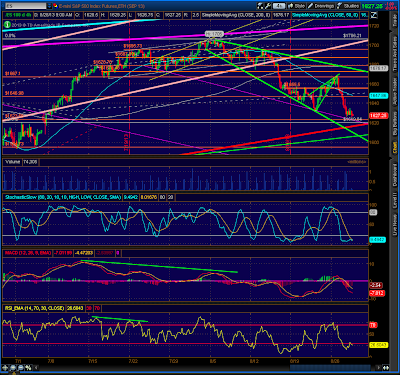 At this time I'm really not sure A) how we're still at these levels with whats coming and B) how anyone could expect any sort of retracement given all that's going down. Even as timid and respectful as I am of "their" powers over this market and as counter intuitive bear postures have been, now I believe you must be leaning south. Only a delay of the war and a taper off with an increase in QE could rally this sucker here. I don't think they are gonna cancel the war, but more QE remains a possibility.

This week and next, markets should remain under real pressure. You also need to be on the lookout for false flag operations as they need distractions now, large ones.