OK, I'm really disturbed about this B/C Manning issue, but I'm not gonna go into any detail on that. What I would like to correlate from this bizarre development is how I believe it encapsulates the New American Matrix. How I think this perfectly frames reality and the 180 degree spin we're fed between what is and what's not real.

Let's start with, "Hi, my former name was America or the USA, and now I would like to be called AmeriKa with a K or the USSA. I was once a freedom loving country with lots of great qualities. I excelled at leadership and my ideals were above reproach. I once exhibited the true elegance of liberty and moral compass. I was once a land where dreams, if one wanted to work hard and excel, could come true."

"Well, sorry bout all that. My bad, but now I'm a liberal bastion of weak, mindless, self centered, self serving, entitled, soul less, God less sheeple that believe everything should be handed to them on a platter. Hard work and morality are being replaced with entitlements and blank promises from bought and paid for politicians. Morals and ethics are being replaced by the new ME FIRST system. Hard work is for illegal immigrants that we'll gladly let flow into the country to take all the jobs so they can support their families in other countries (just so they vote Democrat - legally or not)."

It's all about Jackson Hole and the 10y now. On the periphery you have the global situation that will come back into focus next week. There is a real chance for something financially or politically to blow up this weekend. It's all really coming together now with the tightening and the FF gas attacks. We're really close to the worst going down. Those looking to the new moon on September 05, this may be a better countdown than the Mayan Apocalypse.

I'm not sure markets can ignore (pump enough fake fiat liquidity) to combat a move above 2.9% in the 10y. I'm not sure how all four wheels and both axles are not off the car right now honestly. It is what it is. For now I'm folding my 1610 area/red support diagonal for this move, BUT I am starting to look a lot lower for targets. Now, this does not mean that there can't or won't be one last great bull trap. I warned about great volatility coming and we're in the midst of it now. This is a topping process. This is the convulsions brought on by change (not to be confused with B/C or the USSA discussed above).

SPX Daily - See the green areas? If this is truly going to be a meaningful correction or if the big one is beginning, then those are the targets.

Minis 4hr - Still formless and looking for some sort of stability, price may have taken out near term diagonal (gray) resistance. There is still too much pressure on price from the bond market and resistance levels have been formed that could be formidable. Add to that "they" don't have the juice anymore that it takes to do the heavy lifting at these levels. Alas, put nothing past team manipulation. When they are in total control anything is possible. We are overdue for a retracement of some sort. Anything above 1652 and I'd say bully has the ball back. I still want the 1610 area and my lower red diagonal support. 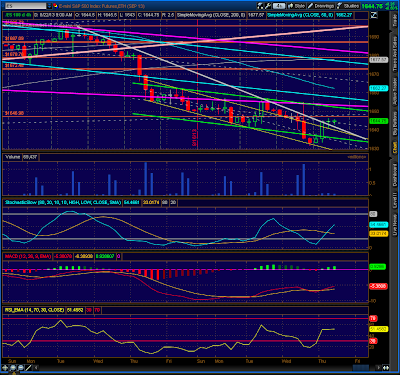 More charts and such to come below.