STB "Event" time? Not sure but everything sure seems to be pointing in that direction. It appears we're going to have Benghazi part deux this weekend except the CIA has apparently done a much better job of planning and coordinating this event, and the Secdef and white house have their prepared statements and photos ready to go.

Maybe this time instead of having dozens of operatives on the ground they will have hundreds to sit and idly watch innocent Americans get slaughtered? Well, that of course is yet to be determined, but either way the USSA funded/created bogeymen the taliban or al-ciada are apparently in false flag mode. Sad when a bunch of yahoos on a blog can spot this coming weeks if not months in advance.

Oh by the way, you are supposed to be scared by this. Scared that the terrorist bogeymen are going to find their way into your home and threaten you personally. After this and coming events you are also supposed to be dying to give up whatever constitutional rights to freedom you have left, beg and plead for gun control and want the nanny state to tuck you in bed safe and sound each night.

Any way, all this crap fits perfectly with the long term technical analysis just like the Taper ON event and debt ceiling crisis that are upon us (not to mention a gazillion other things hitting the fan right now). It appears we're truly, finally, in major topping mode for this stage of their centrally planned extravaganza. I say this stage cause their game will certainly not end here.

The next stage of unabated wealth confiscation and capital controls in the name of saving the state will be coming soon. Nationalization following a nuclear or major event (false flag) will lead us all running right into the arms of the nanny state willing to give up everything for survival. Sounds like a bunch of crap to some of you doesn't it? Well, to those of you I say wake the fuck up.

This game is a winner take all scenario. We're already little more than debt serfs existing to further their state and agendas. They want total control and ALL the wealth. The noose is tightening around our necks and the trap door is about to be pulled. We all better hope that our military revolts, but of course this is why they have drones and a few real sickos on the joysticks.

I'm not going into any of the support numbers today cause none of them that matter are within 40 points. What's more important is to notice the wads of resistance, serious long tern resistance, that lies just above near the 1720 area. 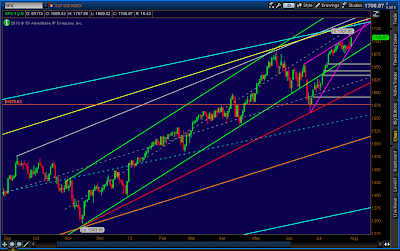 Let me clear this up just a bit moar. RUT chart, see the resistance diagonal off the '99 and '07 tops? HA! and the bastards even have the audacity to throw in a monthly gap going into that resistance. Must show clear strength in the face of the end I guess. Uh, this is an end game point folks. Think about it. Off the '09 low everything that has happened to save us from the RE Bubble crash has been a lie. Tens of Trillions spent, zero real recovery, I mean it's one big joke at our expense. 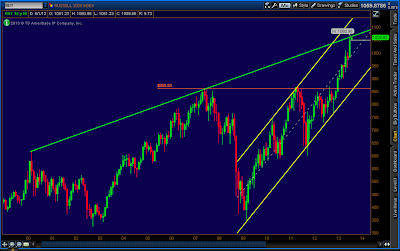 Here, try the DOW on for size - The green resistance diagonal is off the tops and the blue one is off the close. We're close to 100 points from that blue diagonal. 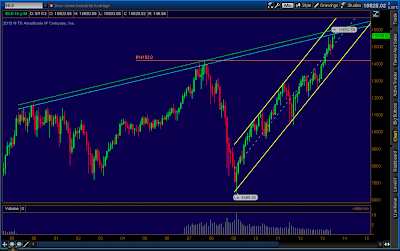 So, here we are. Are we actually, finally, staring down the end game?

More to come below. Thanks for a truly incredible week on the blog setting comment records by miles. Hits are way up as well. You folks kick ass. Thanks for making STB such an awesome place to hang out and get sum real knowledge.