To Syria or not to Syria, that is the question. Well, we all know that the elite must have a war to salvage the petro-dollar, support the military industrial complex and to cover up the crimes of the central banks. This is and has always been the end game scenario from whence the financial crisis started. The third and final bubble, the debt bubble, really can not have any other ending than one where insane and assiduous spending funding endless entitlement programs and special interests to benefit the powerful and not the nation leads to total implosion.

Sadly for the elite it appears that those they have held in economic captivity for so long are actually playing their one and only trump card, not going along with the war. It is nice to see the Europeans in the streets protesting the war and even nicer, even if it winds up only being lip service, their governments listening to the people's protests and actually voting on the confrontation. The UN has apparently had enough of our bullying as well.

Sadly here in the USSA we no longer have that option as we the sheeple are, well, truly sheeple that have lost all rights and voice in the government (unless it comes to a crony funding issues of course). Yes, the totalitarian, fascist, despot ruler (commonly referred to as potus) will make all necessary decisions for you. Congress is only an after thought at this point. You've got to love the patriot act, Bush Jr. and all those presidential directives.

I've discussed the possibility of no war (for now) and the chance of a taper off incident leading to one last ramp. I'm not sure if that will happen, but you must keep the possibility of them somehow ramping this market one last time for the great bull trap. The literal shit storm that our economic and political leaders are facing now is a Cat 5 storm, and it is stuck over DC and NYC raging havoc. As we've seen over the years, no matter what obstacles they have faced they have managed to do the impossible over and over again.

They are in full defense mode now. For years they have done everything in their power to protect the wealth machine (actually money transfer machine moving wealth from the lower and middle class to the 1%). To think they will just let it die is a mistake.

I believe there will be one last shot at glory for the markets and then it all ends. If not, then the "recovery" is over at this point. Syria is the next move in the transition from "recovery" to the next and greatest bubble bust of them all. The stakes are about to get seriously raised in this game of economic and financial roulette. They are moving from one to two bullets in the chamber increasing the odds of disaster significantly.

Minis 4hr - Red market support diagonal. That has been my second target all along and price is sitting just above it. 1623 is the number. Price has moved into a position where it is parallel with this diagonal tomorrow. The 23% retracement off the Novenber '12 lows sits at 1619 providing support here as well.

They either stop the fall here or I think some sell stops get triggered lading to a much larger fall. If this support cracks then pink channel support at 1586 and the s/r point at 1578 come into play. Interestingly the apex for the yellow rising wedge that defined the whole QE4eva move lies just below at 1566. These apex point can be specific market movers. The 38% retracement from the November '12 lows merges with this support point as well. 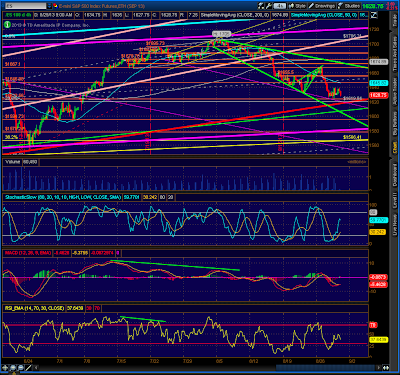 Minis 60m - Formless and lost. Wandering, searching for direction. This market is lost in the wasteland now looking for some sort of leadership and finding none. That's really bad when you have a completely rigged and manipulated POS market and it can't rally. Lower right corner, red diagonal, that's my second bogey. I'll be watching this critical support with both eyes this week. 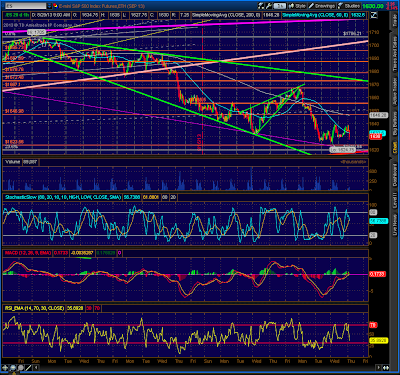 So we sit and wait. War or no war is the burning question here. Then add the taper and budget issues to the general shit storm, what a mess they have created.