Syria. Hmmm, why all the fuss? Why do we have such a major issue with having to bring justice to the Assad regime for using chemical weapons on innocent civilians? Wait, what's that? You mean the whole world is in serious doubt that the regime was responsible for the attacks, and that this may have actually been a false flag operation carried out by the Amerikans and their allies Al-CIAda? Whoaaaa.

Wait a minute, Wait just one minute. That's some serious crazy talk. The USSA doing some crazy, underhanded, manipulative action to incite a war? Stop it right there. That is just stupid talk. OK, they've done it before, actually several times. you need to read 10 false flags operations that shaped our world to get a better perspective on this whole false flag operation idea.

What is a false flag you ask? From wikipedia we get, "False flag (or black flag) describes covert military or paramilitary operations designed to deceive in such a way that the operations appear as though they are being carried out by other entities, groups or nations than those who actually planned and executed them. Operations carried during peace-time by civilian organizations, as well as covert government agencies, may by extension be called false flag operations if they seek to hide the real organisation behind an operation." Remember the Maine, Gulf of Tonkin, Reichstag - all major global events that changed the political landscape of the globe and all were sponsored and carried out as covert operations to fool the mass public so a war could be carried out.

This shit is REAL, and don't you think for one second that this is just conspiracy hogwash. The most recent example of such an operation can be found looking no further than Iraq. Remember Collin Powell testifying? Yea, he may be a better actor than a general. You should read How The Times Have Changed: CIA Files Prove America Helped Saddam Use Chemical Weapons.

I'm really not sure when we became the world's police force and chief disciplinarian. I'm pretty sure that came about right after World War II and was chillingly brought to our attention in Dwight D. Eisenhower's 1961 farewell address. "we must guard against the acquisition of unwarranted influence, whether sought or unsought, by the military-industrial complex. The potential for the disastrous rise of misplaced power exists, and will persist." It was solidified with the JFK assassination. It was furthered under Bush I and II. Obummer, the champion of change, the Nobel Peace Prize winner, is the final puppet to carry the banner to the end.

Why do we give a rat's ass if they have a civil war in Syria? Why is it so important that we topple the Assad regime? It isn't. What is important is that our politicians and central bankers need cover for failed economic policies, for the global spying, for the collapsing dollar (world reserve currency), for the debt bubble that is about to implode and for implementation of a global police force so the globe will do our bidding and our's only.

This war is about failed policies, to enrich the military industrial complex and to protect the petro-dollar and nothing more. This war is meant to entice fear into the masses and governments, to drive them to buy US Treasuries and continue to trade even more oil in even more US dollars. This war is about covering up years of corruption and complete lack of financial regulation.

We are, literally, on the doorstep of financial doom. For years now I've been trying to explain how the math does not work. How $1 Trillion in income can not possibly sustain $2 Trillion in annual spending, a $17 trillion deficit and over $120 trillion in unfunded liabilities. The sequester last year proves that we can't even cut $84 billion of spending without throwing our crumbling economy into convulsions.

Be prepared folks. If they don't get their war over there, or even if they do, something WILL go down over here. It will be large, like on the scale of 9/11 or greater. It will be meant to galvanize the nation against yet another bogeyman. It will also be an inside job. This "event" will serve to enrich and empower the police state, complete the gun grab, to further concentrate power in the government, lessen our freedoms and to complete our destiny as debt serfs to the central bank. Take a look at every post on Washington's Blog today or this weekend for much more background on all of this.

Let me reiterate that we're currently fighting WITH, WITH, Al-Qaeda in Syria. If that does not tell you how screwed up things are then you need to have your head examined. The bogey man behind 9/11, cause of all the unconstitutional NSA surveillance, the Patriot Act, the TSA and DHS, the infidel jihadists that want to kill every christian and Amerikan, this is our new ally.

They (the administration and central bank) are beyond desperate at this point. This is why they are so steadfast on war. War is their only way out at this point. I just hope the sheeple here see through the fog and are willing to stand up against the government as so many others have done around the globe. Sadly, it will not make a difference here. These sadistic bastards will do what they must to maintain their power and wealth machine.

Be on the lookout for something either this new moon or next, and be especially diligent when or if something domestic happens. Make sure before you blindly pick up your flag and start chanting USA, USA that you objectively look at what happened, where, how and why. I'll promise you this, if you do not see through the false flag this time, the next time you are called to rally for your nation is will be for the USSA and not the good 'ol USA.

I've told you for years the markets are nothing more than an illusion and distraction to the larger scheme. Let's look at them anyway since that's what we're all here for.

Minis 60m - My second target of the Red support diagonal is upon us. This was all I was willing to go for this fall. So, what's about to happen. Well, if the war rhetoric dies markets still face budget, deficit and debt ceiling talks the next two weeks. Look, after the fiscal cliff fiasco last year, WTF, who really cares about all the crap they are about to spew in DC. We all know they will put on a show like they really care and raise the debt ceiling no matter what. It is what they do. do you really think austerity and spending cuts or sequesters will go over well in DC especially since we're so far into this great "recovery". Shuh, riiiight.

1619 in the lower right corner. That is the line of doom. If that goes the fall that follows will be significant. If they can hold it and get into a taper off situation a rally may ensue for a month or so. Funny how major technical points always time themselves with large economic or global issues. 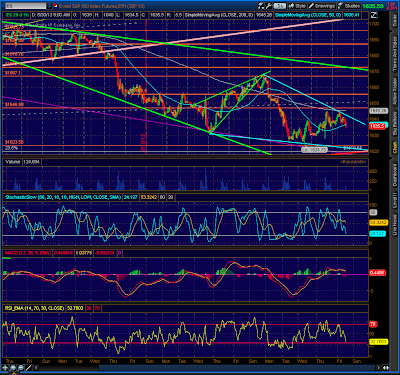