I think right now we have to pay closer attention to the alternative media more than ever to find the truth. There is a lot going on we're not hearing about, and when they get quiet you know something is up. Budget, taper, Fukushima, Syria (MENA) - the list of nightmares is really, really long right now.

The charts are more than ready. They are poised for a major turn. All that is left is for the Fed to let go. Heck, they are even telling us they are going to let go, and this SOB just sits up here hoping that won't happen. Poor retail. They wait and hold on thinking they got it all and this will never end. They want moar of everything and are blind to the consequences.

Minis 60m - Peach breach? Critical first level support has been hit. White channel and 1687 support are busted for now. Possible HnS with breakdown in there worth near 30 points. Looks like bears avoided the RS breakout this time. Drifting farther from 1700 is not good either. This is a must or ... 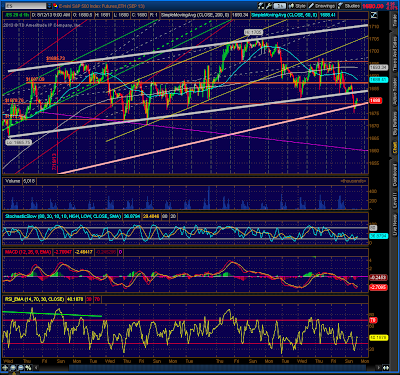 Minis 4hr - there is a massive hole all the way down to 1600 before you get to the next major support. 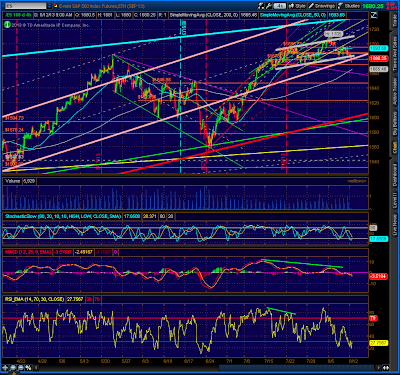 That's kinda how it is supposed to happen at these major tops. 1600 one week and 1700 a few weeks later and then back again for a few more round trips as the top sorts its self out. Volatility arises as the bulls and bears start to mount extremes.

I'm almost sure I'll be calling a top very soon. I don't see the next QE able to set a higher high if there is one, and if there isn't it's game over. I'm leaning there will be one more QE and one last crash after that at which point they then go for retirement plan confiscation.